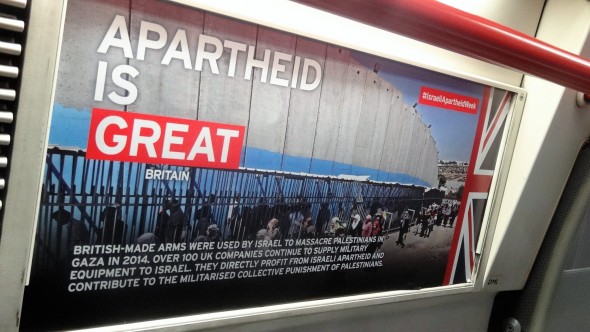 Here’s a link to an article about a cool political art project that took place on the London subway. The action was conducted last month by London Palestine Action:

We decorated trains on the London Tube with posters meant to illuminate the support that Israeli authorities obtain from the British government, media, and arms industries. At a time when pro-Palestinian activism is increasingly under attack, it is important to get creative, in order to affect popular discourse.

The subvertisements focused on four targets: the BBC, security company G4S, British arms deals with Israel, and housing demolitions in the Occupied Territories.

Also, if you’re unfamiliar with Souciant you should check it out, it’s a great source of leftist opinion and ideas from Europe and the Middle East.