Image by Eric Drooker. Please forward and print these images widely through websites, facebook, solidarity organizations, etc. You can download high-res versions here:
ENGLISH
SPANISH
IWW Madison has posted a General Strike Pamphlet that reads as follows:
General Strike Pamphlet
What Do We Face?
Walker’s bill, if passed, will strip public-sector unions of the right to collectively bargain regarding all workplace issues other than basic wages. Workers would no longer have a legal say in their pensions, their healthcare plans, workplace safety, or any other pertinent issues. Without collective bargaining, we have no legally-recognized way to influence how we are treated at our jobs. Workers with access to a union have an opportunity to make their workplaces more democratic. Think about how much time we dedicate to work and work-related activities. With so much of our lives spent in undemocratic workplaces, how could we have real democracy in the rest of our lives? Walker is practicing corporate sponsored blackmail, as well as not honoring his own state Constitution and conspiring to extort money from the residents of Wisconsin. The “Rule of Law” applies to him too. And hope he and his corporate co-conspirators are incarcerated soon.

Nevermind – Gildan and Fruit of the Loom (sweatshop) t-shirts. 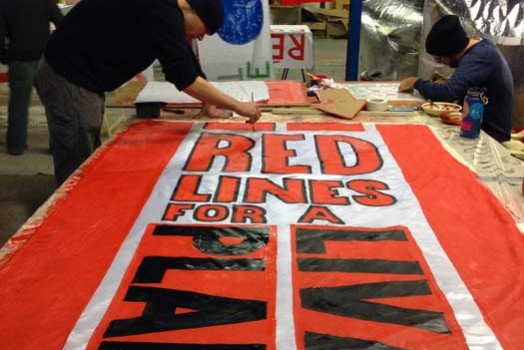 This is what making art with a hundred-plus people looks like. One of the hub spaces for artists to crank out work for the countless number of demos taking place in… 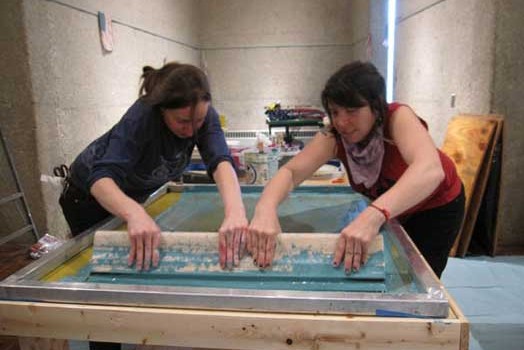 Justseeds is on day 3 of our collective install in Milwaukee for the SGCI conference. Join us this Thursday for the “Uprisings: Images of Labor” opening (5-8), and Friday and…