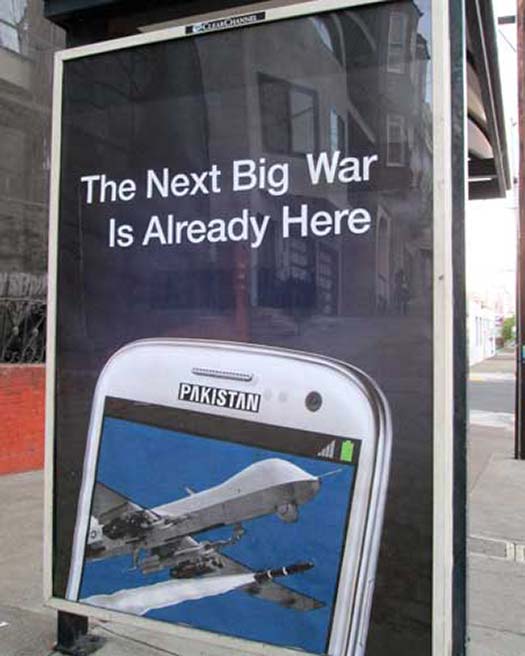 The California Department of Corrections (CDC) has unveiled a new series of advertisements to defend America’s drone policy amidst mounting public scrutiny from lawmakers and human rights groups.
On Election Day, November 5, 2013 the CDC successfully apprehended, rehabilitated and discharged over a dozen bus shelter advertisements in San Francisco, including the intersection of Market and 7th Street, one block from the Federal Building.

Set against a black background, the ads feature a smartphone which has photographed a Predator drone strike in progress. On the smartphone screen a missile streaks away from the drone and crosses a cloudless blue sky. Just above the image, a new logo – PAKISTAN – imitates the original brand name, and a headline for the ad reads, THE NEXT BIG WAR IS ALREADY HERE.

The ads were released one week after historic Congressional testimony by Pakistani survivors of U.S. drone attacks. Sponsored by Representative Alan Grayson of Florida, the hearing was the first time that survivors were able to present lawmakers with the on-the-ground reality of America’s drone policy. Rafiq ur Rehman, a primary school teacher in North Waziristan, described an October 2012 missile strike that killed his mother and hospitalized his children as they were picking vegetables. Two of the children, 9-year-old Nabila and 13-year-old Zubair, also delivered testimony.

The hearing on Capitol Hill took place as the U.S. drone policy is facing unprecedented public criticism. In October the United Nations released two separate reports calling for greater transparency in the use of drones. Amnesty International and Human Rights Watch have also unveiled a joint investigation criticizing U.S. drone strikes in Pakistan and Yemen as extrajudicial executions that could amount to war crimes. This week Tehreek-e-Insaf, the ruling party in the Pakistani province of Khyber-Pakhtunkhwa, voted to block NATO supply lines unless drone strikes are suspended in the nearby tribal belt.

Limited by national security considerations, the Obama administration has been unable to effectively respond to critics of its top secret program. Federal officials have stubbornly refused to acknowledge controversial aspects of the program, such as criteria for its kill lists or the mounting death toll among civilians. As these operations are shrouded in secrecy, the California Department of Corrections released the rehabilitated smartphone ads to assist our colleagues in the federal government and explain the benefits of drones to war-weary Americans. Such benefits include cost savings from limited personnel serving overseas, streamlined executions unimpeded by judicial oversight and reduced environmental impacts due to the short commute of drone pilots operating close to home.

The ads are currently at liberty and seem to have successfully readjusted to public life. However, these advertisements will remain under surveillance by department staff to prevent recidivism and any potential lapse into prior criminal behavior.