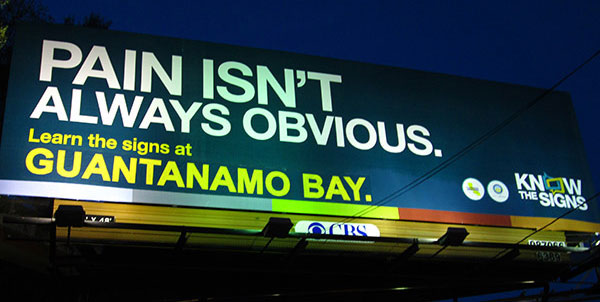 The California Department of Corrections (CDC) has unveiled a new billboard campaign to assist the U.S. Navy with transparency at the Guantanamo Bay detention facility.
On March 24, 2014, the CDC successfully apprehended, rehabilitated and discharged a billboard in San Francisco, located at Oakdale Avenue between Bay Shore Boulevard and U.S. Highway 101. With larger-than-life lettering the billboard reads, PAIN ISN’T ALWAYS OBVIOUS. LEARN THE SIGNS AT GUANTANAMO BAY. Next to its massive headline the ad includes logos for a California mental health agency and the tagline KNOW THE SIGNS.
The corrected advertisement can be seen on the CDC website at www.CorrectionsDepartment.org.

The ad was released from custody two weeks after a landmark lawsuit, Hassan v. Obama, was brought before U.S. District Court in Washington, D.C. to end force-feeding at Guantanamo Bay. Filed on behalf of Emad Abdullah Hassan, the lawsuit is the first case against forced-feeding since the U.S. Court of Appeals ruled that federal courts can hear challenges by detainees to conditions of their confinement.

Hassan is a Yemeni national who has been detained at Guantanamo Bay for twelve years despite being cleared for release in 2009. He has been on hunger strike since 2005 and has allegedly experienced over 5,000 forced-feedings, a practice that is violent, abusive and illegal, according to his lawsuit.

Although half of Guantanamo’s inmate population has been cleared for release, 154 detainees are trapped in legal limbo at the U.S. naval base. Last year more than 100 Guantanamo detainees were on hunger strike demanding an end to their detention without trial. Currently, less than 40 people remain on hunger strike, 16 of whom are being forced-fed.
In a reversal of previous operating procedure, the U.S. Navy is unwilling to confirm or deny the number of detainees on hunger strike. The White House is also declining to comment on the health and welfare of detainees since the President is named as a defendant in Hassan v. Obama.

With federal officials unable to respond to misleading accusations from detainees, the California Department of Corrections discharged a new billboard campaign to present a true and accurate picture of Guantanamo Bay. Although U.S. Navy personnel strictly follow a safe, legal and humane protocol, a small group of detainees has been disrupting operations within the facility and seeking methods for self-harm. The CDC’s billboard campaign urges the general public to recognize these early warnings of troubled behavior and prevent injuries before they occur. Such warning signs include:

Withdrawal from others by avoiding meals and transferring into solitary confinement.
Complaints of physical pain despite the care taken by Navy medics when inserting and removing oversized feeding tubes into detainees’ nostrils twice a day.

Practicing reckless behavior by refusing food and opting for “the water cure,” a procedure that involves quickly forcing a high volume of liquid into detainees’ stomachs, causing internal organs to swell and possibly rupture.

Neglect of personal hygiene by detainees who vomit and defecate on themselves during renourishment procedures that include laxatives.

CDC personnel understand that long-term detainees may occasionally go through tough times with feelings of anxiety or hopelessness. However, the use or threat of self-inflicted injury is a serious violation of administrative procedure.

When individuals are in crisis, trained professionals can provide resources, hope and reassurance that help is within reach. Detainees are encouraged to seek out specialized programs of mental health care at Guantanamo Bay, to the extent resources are available for this purpose. By fully accessing mental health services, malnourished detainees can reduce the risk of violence, readjust to conditions of confinement and join their colleagues who are patiently serving terms of indefinite detention.

For more information on the operations and programs of the CDC, contact the California Department of Corrections Office of Communications at cdc@revolutionist.com.