Workers from the International Longshore and Warehouse Union (ILWU) are waging a critical fight in Longview, Washington – blocking trains and scab labor, and showing the rest of the country that standing up for one’s rights can and should go far beyond simply marching and recall elections – aka the failed labor strategy in Wisconsin.

A quote from today’s Seattle Times: “At least 500 Longshoremen stormed the Port of Longview and broke out windows in the guard shack, according to Longview Police Chief Jim Duscha. As men wielding baseball bats and crowbars held six guards captive, others cut brake lines on boxcars and dumped grain, according to Duscha.”

More inspiration: “[Richard] Ahearn, regional director of the National Labor Relations…alleged union workers bombed EGT Terminal with a bag of manure from an airplane. It had signs attached saying “scabby 701,” a reference to another local that was doing work on terminal construction.” 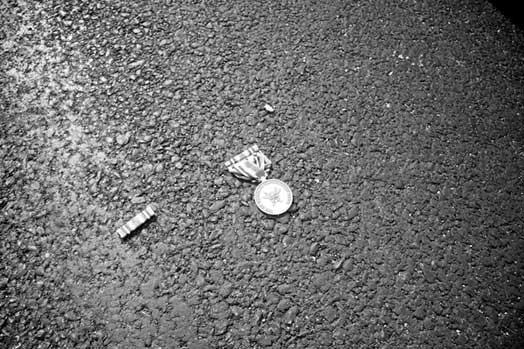 Greg Miller has posted some incredible photos of the NATO/G8 protests in Chicago and the IVAW-led demo where veterans returned their medals. To see more photos from the action, click…

by Nicolas Lampert
Calls for Art

Chicago in War is a series of events, art shows, and performances that explores the continued rupturing of the traumas of war in everyday America. We are seeking your participation….

This stencil has been up for years in Milwaukee and makes me smile every time I see it.

The Long Walk: Demonstrators March from Milwaukee to Madison

Fighting for justice is lifetime commitment; a long walk for the long haul. Victories take months, years, and decades. Public employee workers in Wisconsin suffered a bitter, bitter defeat when…