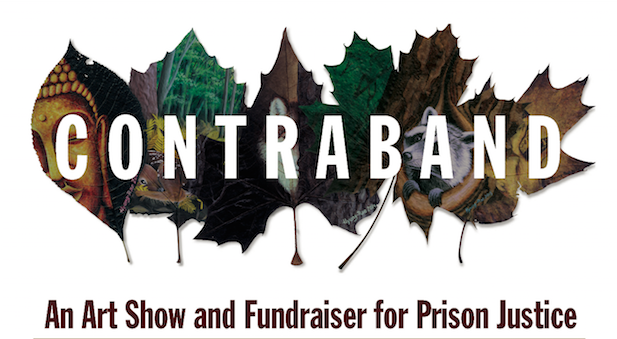 Contraband is the name of a series of paintings on leaves created by Todd “Hyung – Rae” Tarselli. Leaves are considered contraband or forbidden possessions in prisons across Pennsylvania. This show will feature 6 of these delicate leaf paintings illustrating detailed images of animals and nature. Incarcerated as a teenager, Hyung-Rae has served 25 years of a life sentence.

At 7pm on Friday April 7th there will be speakers and songs including family members of people serving life, survivors of violence who support the campaign, readings from the writings of those sentenced to life as juveniles, and information on the Campaign to End Death by Incarceration.

The exhibit will showcase artists from both sides of the prison walls including  Mary Dewitt’s profoundly moving portraits of women serving life in PA.  Illustrations describing prison conditions and self portraits by incarcerated artists from The Prison Poster Project (PPP) will also be displayed. The PPP was a collaboration between artists across the razor wire to create a teaching tool about the prison industrial complex. There is a special portrait of Ce Ce McDonald painted by political prisoner Marius Mason. Now released, CeCe gained national attention for defending herself from a racist and transphobic attack and was sentenced to 4 years.

A life-size solitary confinement cell will also stand in the gallery,  the walls of which are made from letters written from people incarcerated to Book ‘Em, Pittsburgh’s books to prisoner program. Projected on the walls of the cell will be a slideshow of women serving life presented by the Women Lifers Resume Project. There are approximately 200 women serving life; some were sentenced as teenagers and some were commuted from death and many are in their 4th decade of imprisonment.

The proceeds from the show will go to Let’s Get Free – The Women and Trans Prisoner Defense Committee, specifically in their efforts to pass HB-135, a bill that would expand parole eligibility for lifers. Let’s Get Free is a proud member of the Coalition to Abolish Death By Incarceration.

Save the date of Saturday April 22nd – 2pm, for an interfaith panel exploring how local religious institutions have influenced the transformation of society throughout history until the present, from the movement to abolish slavery through prison justice. Marcus Rediker will share stories from his latest book about the Quaker abolitionist Benjamin Lay, who in the early eighteenth century saw the destructive connections among slavery, race, incarceration, and capital punishment.  Other panelists are still being confirmed.