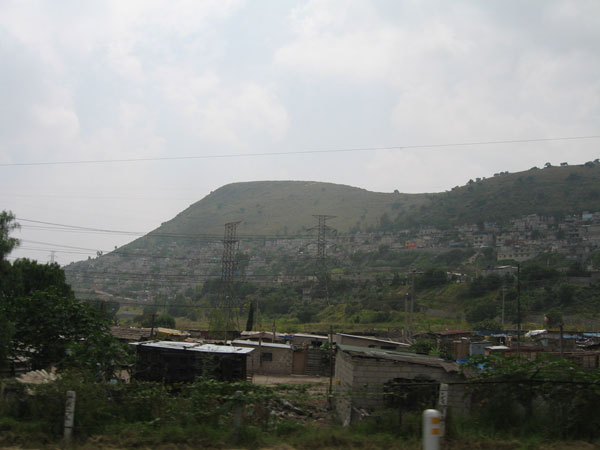 I barely got a chance to make any sense of D.F. before we had to rush off to Ecatepec, which is no easy task. Although just above Mexico City, for some reason it was so difficult to get to, which each day bringing new routes, some taking 20 minutes, others two hours. We would pile into 3 or 4 taxis, or take 3 or 4 different subway trains, only to emerge in a location that ultimately didn’t seems that far away. The trip was always beautiful, with Mexico City unfolding before us, covered in graffiti and amazing hand-painted signs. Almost every square inch is decorated, and not by Photoshop or Illustrator, but by human hands. The landscape seems crafted by hands of all different sizes, giant hands to mold the cinderblock sprawl, tiny hands to paint the smallest details on signs for food, she repair and photocopies. Although massive, the scale of life seems so much more manageable than in the US, I can see how each piece was constructed by a set of hands not all that different than mine. Although they are advertisements, and operate just like corporate billboards in New York, I can help but fall in love with the giant sales pitch texts painted along the sides of the road. Each letter two feet wide and four feet tall, the names of Rock en Español bands stand tall like straight letter grafitti pieces, competing with throw-ups and tags, and time itself, as the walls crumble under the paint. We speed through Ecatepec and every inch is filled, with ramshackle buildings and texts of all sizes. The only space that escapes total saturation are the tops of the hills and mountains in the distance. Our first stop is a community at the upper edge of Ecatepec, down a dirt road to a community center called the Centro Cultural Ricardo Flores Magon. The community just celebrated their 14 year anniversary, having started as a group of about 500 people with no place to live, squatting their land, building rudimentary structures, fighting with the government, constructing solid cinderblock dwellings, and now fighting to get utilities and city services. Although still living in a deep level of poverty, the people we met seemed really committed to their community, and embedded in a larger context of struggle for the improvement of everyone’s lives. Although not all anarchists, they chose to identify with Ricardo Flores Magon because of his role in the Mexican Revolution and his organizing of the working class in urban areas (as opposed to Zapata and Villa’s primary rural terrain of struggle). We hung an impromptu show on the walls of the center, and gave a brief talk about what we all do in the US. It was strange talking about Justseeds and trying to building a self-sustaining artist network in the states in the context of a community that had literally built itself out of ground. The privileges we have here made me feel like our struggles seem somewhat trivial in comparison. But the community seemed appreciative of our words and art, and we got a tour of the area, looking for walls we could paint and paste on, and brainstorming ideas for public art. Unfortunately because of the size and sprawl of Ecatepec, and a fair amount of disorganization, I never made it back to this community before the trip ended. Some folks did make it back tho, and did a silkscreening workshop, printing Zapatista t-shirts and leaving the screens with the cultural center so they can keep using them.