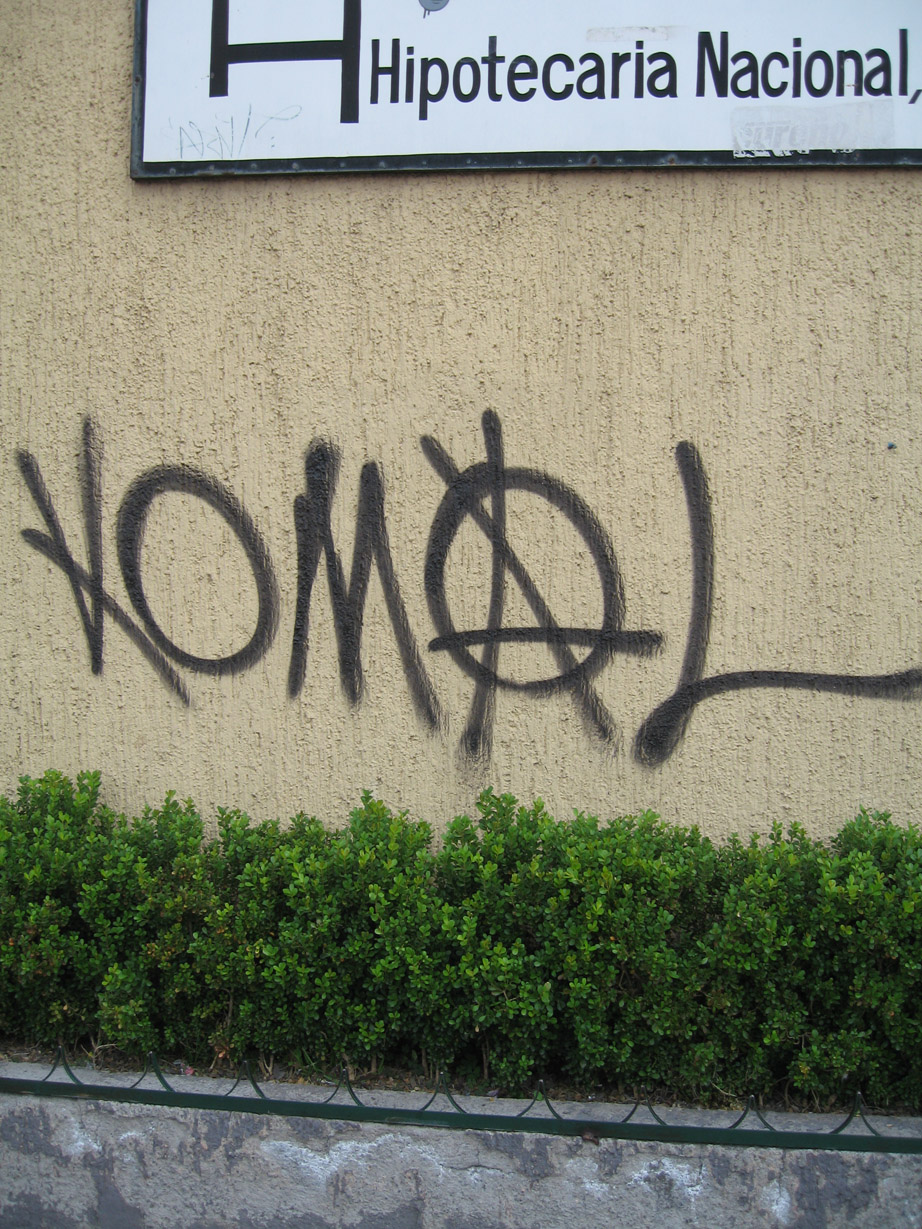 The next stop on the trip is the city center of Ecatepec, where we meet four members of the local graffiti crew the Komal Collective. Komal Collective formed in 2006 as a response to the Zapatistas’ La Otra Compaña, and the call for self-organization in many areas of society. The members of Komal are individual artists, focusing on stenciling and political graffiti, but they are also organizers, trying to bring together and politicize different elements of the street art scene in Mexico. Their stencils dot the walls of Ecatepec, and many surprisingly engage me, unlike so much of the street art that just seems to add to the heep of messaging already saturating NYC streets. Komal also recently organized a large scale museum exhibit of street art from artists all over Mexico called Las Calles Están Diciendo Cosas (The Streets are Saying Things).

We walk through downtown, passing stencil and graffiti highlights along the way. We end up at Komal’s studio, which is also where member Jorge lives. It’s like a timewarp back to high school, hanging out with graffiti writer friends, with walls covered in tags and stickers. The air is thick with incense and stencils of punks and Mexican revolutionaries peek out from behind the furniture. Jorge is our paint hook-up, and the writers and muralists in our crew pick out can colors and put in an order.

Next we’re on our way to a small community center in the barrio of Xalostog. We drove around in circles for over an hour looking for this place, like most of Ecatepec, their were no street signs or building numbers. The area is much more developed than Flores Magon, with structured city blocks and stores on the corners. That said, the first thing any visitor to Xalostog notices is the smell. You know when someone has a big furry dog that has a pile of blankets it sleeps on the porch, and the blankets never get cleaned, and it rains, and you have this giant stinky rotting mess of blankets? Imagine the smell of that times a thousand. It turns out that the cultural center shares the street with an animal rendering plant, where thousands and thousands of animal carcasses are boiled down into soap. Everything is infected with the smell, the roads, the walls, the trees. It’s more than some of our crew can handle, and it takes all they’ve got not to puke. It’s a struggle to comprehend that everyone in this neighborhood lives with the smell all day, every day. We hang a portion of the Yo! What Happened to Peace? show and some Justseeds prints in the cultural center, and then finally get to work doing some art, pasting the walls of the entry way with posters. It’s fun, slipping and sliding on the paste that’s fallen on ground, having the time and space to blanket the walls with patterns of posters from Taller Tupac Amaru, Justseeds, Contra, Werc, Yo! and the Street Art Workers. The finishing touches are a giant stenciled poster of a woman with a machete from San Salvador Atenco painted by Melanie, and Bobby Nicholson’s life size cut-outs of Tommy Smith and John Carlos, the Black athletes that gave the Black Power salute at the 1968 Olympics in Mexico City. It’s a strange juxtaposition, this symbolic peak of the Black Liberation Movement in the US sitting on the walls of this cultural center struggling to provide martial arts, dance classes and art instruction to the community. Turns out that Tommy and John’s fists played well for the cameras that sent the image across the world, but almost no one in Mexico is familiar with the image. Most were too busy dealing with the Tlatelolco Massacre that had happened 10 days earlier, with hundreds dead, hundreds more missing, and the knowledge the the government would rather slaughter students wholesale than even sit at a table and listen to their concerns.
Although the entire trip was amazingly educational and vital, I couldn’t help shake the feeling that in many ways we were re-living this 1968 moment, where the struggles of people in Mexico and the US cross paths but can’t quite communicate with each other. Where Mexico becomes a platform for the activists in the US to take a stand, without really comprehending where they (we) are standing.