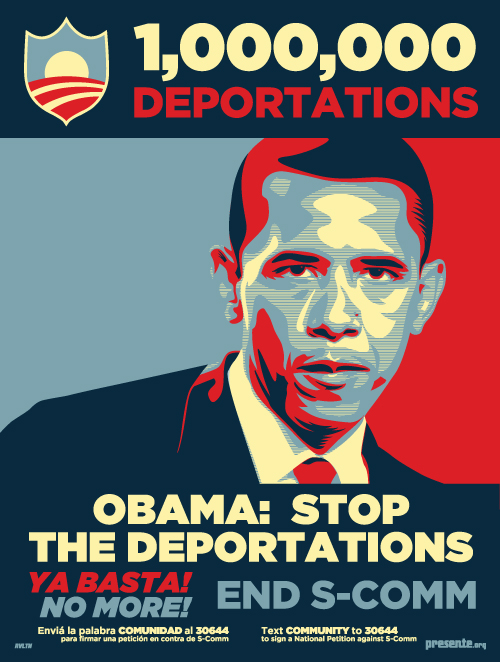 (Art by Cesar Maxit)
“the administration has moved to ramp up deportations, expanding the brutal efficiency of a system that Mr. Obama has acknowledged is broken, arbitrary and unjust.” – New York Times, Aug 15. 2011
After hitting a record 1 MILLION deportations, the Obama administration just did the unthinkable: Forcing states and police departments to comply with a controversial program called Secure Communities or S-Comm – a move guaranteed to deport many more millions of people.

S-Comm is a highly criticized federal program that is deporting immigrants who have done nothing wrong, encouraging racial profiling, devastating communities around the country, and making us all less safe. In fact, under S-Comm authorities can deport a woman reporting domestic violence, instead of protecting her. Huge immigrant states like Illinois and New York opted out of the program because it breeds distrust of the police – and now President Obama is forcing them to comply.
We need a massive outcry—and fast—if we are to stop this disastrous program. Since Thursday, the organization I helped found, Presente.org, began a petition to end S-Comm, and since then, more than 20,000 people have signed on!! Will you help us get to 30,000 signatures?
Click here to sign the petition asking President Obama to end S-Comm
Under the Obama Administration, ICE and DHS have gone out of their way to mislead the public about Secure Communities. And despite rhetoric about supporting fair immigration reform and relief for our communities, their actions are speaking much louder than their words.
Now they are poised to force local officials to make this situation even worse. Until recently, the Obama Administration used to sign agreements with states, cities, and towns regarding whether or not these localities wanted to enroll in S-Comm. But when local governments started to say they didn’t want the program, the Obama administration changed their own rules. On Friday, August 5th, they ended agreements with 42 states, claiming that local permission wasn’t needed to force every local police department into the program by 2013.
If we don’t do something about it, S-Comm will come to every neighborhood in the country—including yours! The Obama administration has already deported more than 1 MILLION people, more than any other administration in history. S-Comm will bring about even more devastating consequences.
Click here to sign the petition asking President Obama to end S-Comm
We’ll start by compiling these signatures and delivering them to the President and the media. We’ll work with immigrant rights organizations, state-based groups, and law enforcement to educate the public and help organize a major pushback on the administration’s dangerous move.
I recently commissioned the awesome poster you see above for the campaign, done by my great friend and fellow artist, Cesar Maxit! You can click here to download it.