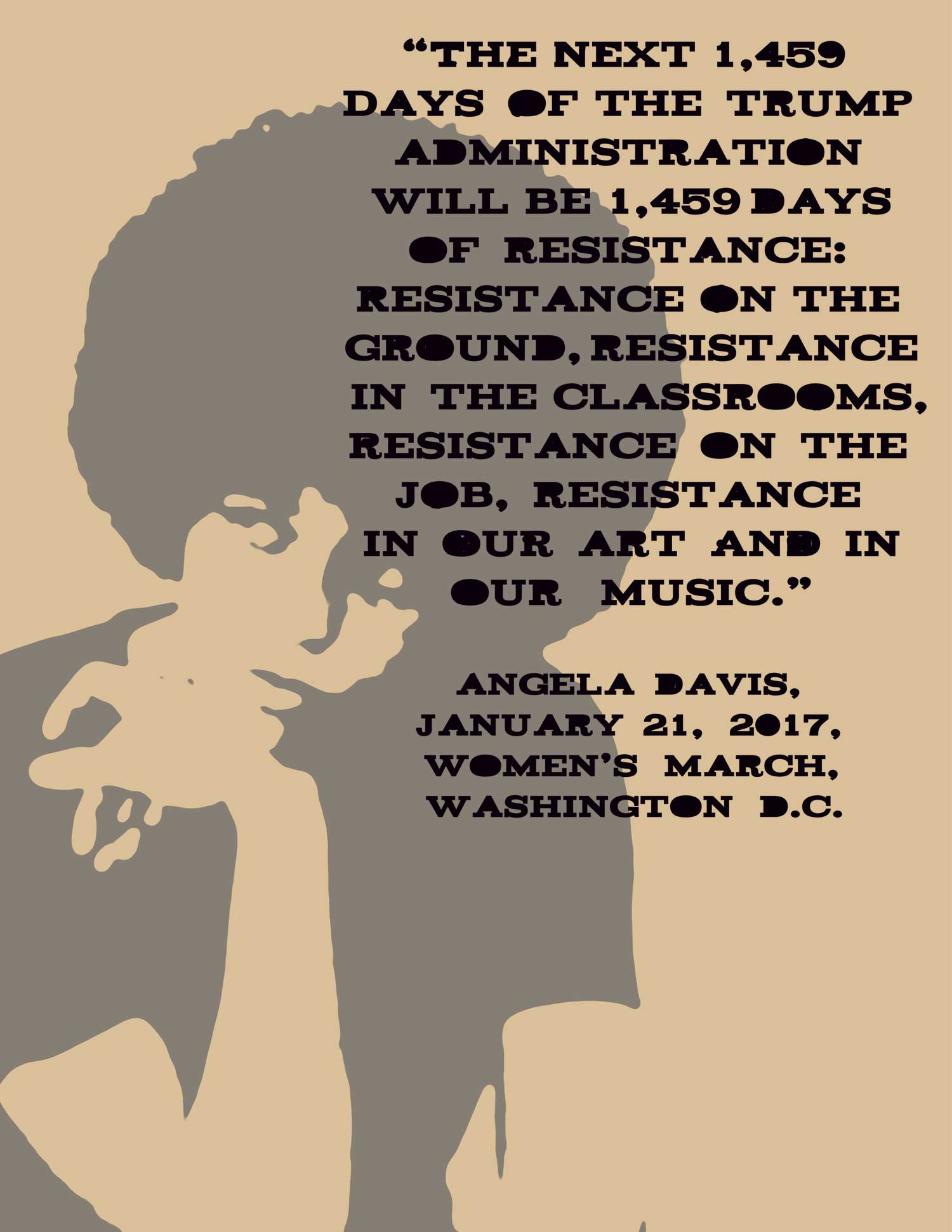 Image inspired by Angela Davis, her speech at the Women’s March on Washington D.C., and inspired by all those in resistance.

Here is the full text of her speech:

“At a challenging moment in our history, let us remind ourselves that we the hundreds of thousands, the millions of women, trans-people, men and youth who are here at the Women’s March, we represent the powerful forces of change that are determined to prevent the dying cultures of racism, hetero-patriarchy from rising again.

We recognize that we are collective agents of history and that history cannot be deleted like web pages. We know that we gather this afternoon on indigenous land and we follow the lead of the first peoples who despite massive genocidal violence have never relinquished the struggle for land, water, culture, their people. We especially salute today the Standing Rock Sioux.

The freedom struggles of black people that have shaped the very nature of this country’s history cannot be deleted with the sweep of a hand. We cannot be made to forget that black lives do matter. This is a country anchored in slavery and colonialism, which means for better or for worse the very history of the United States is a history of immigration and enslavement. Spreading xenophobia, hurling accusations of murder and rape and building walls will not erase history.

No human being is illegal.

This is a women’s march and this women’s march represents the promise of feminism as against the pernicious powers of state violence. And inclusive and intersectional feminism that calls upon all of us to join the resistance to racism, to Islamophobia, to anti-Semitism, to misogyny, to capitalist exploitation.

Yes, we salute the fight for 15. We dedicate ourselves to collective resistance.

Women’s rights are human rights all over the planet and that is why we say freedom and justice for Palestine. We celebrate the impending release of Chelsea Manning. And Oscar López Rivera. But we also say free Leonard Peltier. Free Mumia Abu-Jamal. Free Assata Shakur.

Over the next months and years we will be called upon to intensify our demands for social justice to become more militant in our defense of vulnerable populations. Those who still defend the supremacy of white male hetero-patriarchy had better watch out.

This is just the beginning and in the words of the inimitable Ella Baker, ‘We who believe in freedom cannot rest until it comes.’ Thank you.”

This graphic is free for people to use on flyers, posters, banners, t-shirts, and websites, but we ask that you send us what you use our graphics on, or photos of them in use! The artist maintains the copyright to this work, and it can not be re-used or re-interpreted by for-profit or non-profit ventures INCLUDING FOR FUNDRAISING under any circumstances WITHOUT PERMISSION OF THE ARTIST. If you want to get in touch with the artist to inquire about licensing this image please email info@justseeds.org.