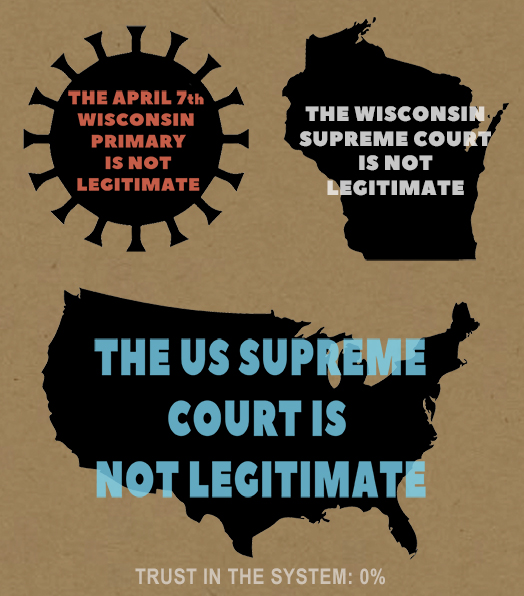 The April 7, 2020 Primary Election in Wisconsin will go down in history as the most undemocratic and unsafe elections in the states history. It should shock people in every corner of this fractured nation and world. The election – held during the Covid-19 Public Health Crisis – should have been postponed until mid-June, had not the corrupt Republicans Legislature appealed the Governor’s orders and sent it to the partisan Wisconsin Supreme Court who ordered the election to take place on April 7th against the Governor’s orders the previous day.

So much for sheltering at home and avoiding large crowds of people. Voters who had not requested an absentee ballot had to choose between democracy or potentially getting infected by Covid-19. In Milwaukee only 5 polling sites were open when the norm is 180 sites. Voters in Milwaukee had to wait in lines up to 3 hours long with hundreds of other people to cast their ballot.

Many voters who had requested absentee ballots never received their ballot in the mail. And the Supreme Court ruled just one day before the Wisconsin Primary that absentee ballots not postmarked by April 7th would not be counted.

We all know what this is about. Stealing elections. The Republicans schemed to reduce voter turn out – particularly in Milwaukee – and they had a partisan Wisconsin Supreme Court and US Supreme Court behind them to do their dirty work. The Wisconsin Primary Election has national implications. Republicans have been trying to remove 200,000-plus voters from the roll in Wisconsin so they can steal the 2020 November presidential election in a key swing state. Wisconsin could very well decide the 2020 election and purging 200,000 voters – mostly African American and Latino voters in Milwaukee and young voters (college students) – could achieve their goals. Thus the Wisconsin Primary Election was all about the Wisconsin Supreme Court race and stacking the court with a partisan conservative judge who will likely carry out the purge of voters.

Republicans know no shame. They were willing to send voters to their grave to steal an election. The Wisconsin Primary Election is forever tarnished. It was a sham and it is not legitimate. Neither is the Wisconsin Supreme Court and US Supreme Court. People should have 0% trust in these broken institutions that have been weaponized to defend corporate America, the 1%, white supremacy, homophobia, and patriarchy.

Turn your anger into activism.