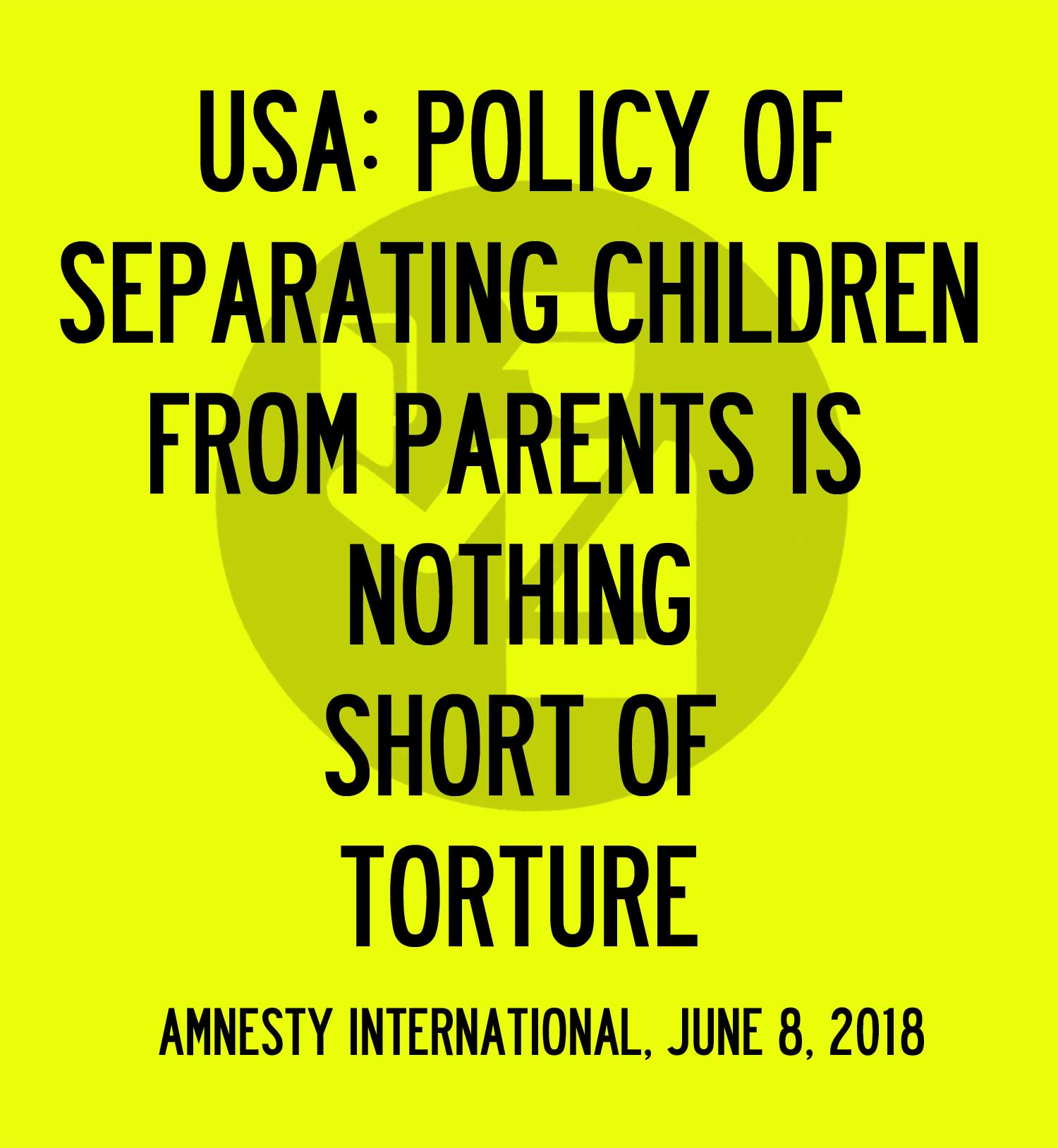 Amnesty International released a statement on June 18, 2018 about the Trump Administration’s barbaric policy of separating children from their parents.

USA: Policy of separating children from parents is nothing short of torture
18 June 2018, 17:53 UTC

The sickening images of children cruelly separated from their parents and held in cages as a result of Attorney General Jeff Sessions’ policy of ‘zero-tolerance’ will leave an indelible stain on the reputation of the USA, said Amnesty International today.

“This is a spectacularly cruel policy, where frightened children are being ripped from their parent’s arms and taken to overflowing detention centres, which are effectively cages. This is nothing short of torture. The severe mental suffering that officials have intentionally inflicted on these families for coercive purposes, means that these acts meet the definitions of torture under both US and international law,” said Erika Guevara-Rosas, Amnesty International’s Americas Director.

“There is no question that President Trump administration’s policy of separating mothers and fathers from their children is designed to impose severe mental suffering on these families, in order to deter others from trying to seek safety in the USA. Many of these families come from countries experiencing generalized violence and grave human rights violations, including Honduras and El Salvador. This is a flagrant violation of the human rights of these parents and children and is also a violation of US obligations under refugee law.”

Attorney General Jeff Sessions announced the “zero-tolerance policy for criminal illegal entry” on 6 April 2018. Since the policy came into effect, more than 2,000 children have been separated from their parents or legal guardians at the US border. Children’s rights are violated in multiple ways: they are detained, they are separated from their parents or guardians, and they are exposed to unnecessary trauma that might affect their development.

Statistics obtained by news media suggest that thousands more migrant families may have been separated by the Trump administration even prior to this new policy.

Amnesty International recently interviewed 17 asylum-seeking parents who were forcibly separated from their children, and all but three of them had entered the USA legally to request asylum.

“The claims of the Trump administration ring hollow. This cruel and unnecessary practice is being inflicted not only on families crossing irregularly, but also on those seeking protection at ports of entry. The majority of these families fled to the US to seek international protection from persecution and targeted violence in the Northern Triangle, where their governments are unwilling or unable to protect them,” said Guevara-Rosas.

Secretary of Homeland Security Kirstjen Nielsen has denied a policy of separating families is in place, but her statement from January this year confirms that the intention all along has been to target families: “We’re looking at a variety of ways to enforce our laws to discourage parents from bringing their children here.” Her predecessor John Kelly, now Trump’s chief of staff, suggested the policy as early as March 2017 “in order to deter” families of migrants and asylum seekers from coming to the USA.

“Make no mistake, these family separations are a crisis of the government’s own making. The U.S. government is playing a sick game with these families’ lives by playing politics with what is a serious and mounting refugee crisis. Just as we have seen with previous immigration reforms from this administration, authorities have chosen to target the very families seeking safety in the USA, adding to the trauma and pain they have already experienced,” said Erika Guevara-Rosas.

Amnesty International is calling on the administration to immediately put an end to this unnecessary, devastating and unlawful policy of forced separation, and to reunite those families that have already been separated as quickly as possible.