Here’s a story that happened while printing with Justseeds at the PrintJam in La Merced, Mexico City this past August.

My first morning in Mexico City, a place I’ve never been (and have been kicking myself about for years now), started in La Merced. The neighborhood is a bustling place, a cacophony of commerce and movement, and a pretty amazing spot to drop someone into on their first full day in one of the biggest cities in the world. No tourist guidebook is going to tell you to start your first morning by taking the metro to Merced and trying to find your way to the street-level exit amongst the hundreds of vendor stalls.

PrintJam, a collaboration with the awesome folks from the ATEA studio (where Justseeds member Sanya Hyland has her letterpress shop), involved setting up all kinds of printing equipment in the Plaza de Aguilita and printing nonstop with the public and several local collectives. The idea was that we’d start drawing illustrations about the area, and turn them into prints that we’d teach folks how to make.

That first morning, I spent some time talking to Chucho, one of the printers from ATEA. He’s telling me about the area, how people live, what’s changing. He points out one of many men walking by with a giant cart, or maybe I’d call it a dolly or hand-truck. Local parlance for these carts is diablo, and the men who work them are called Diableros. 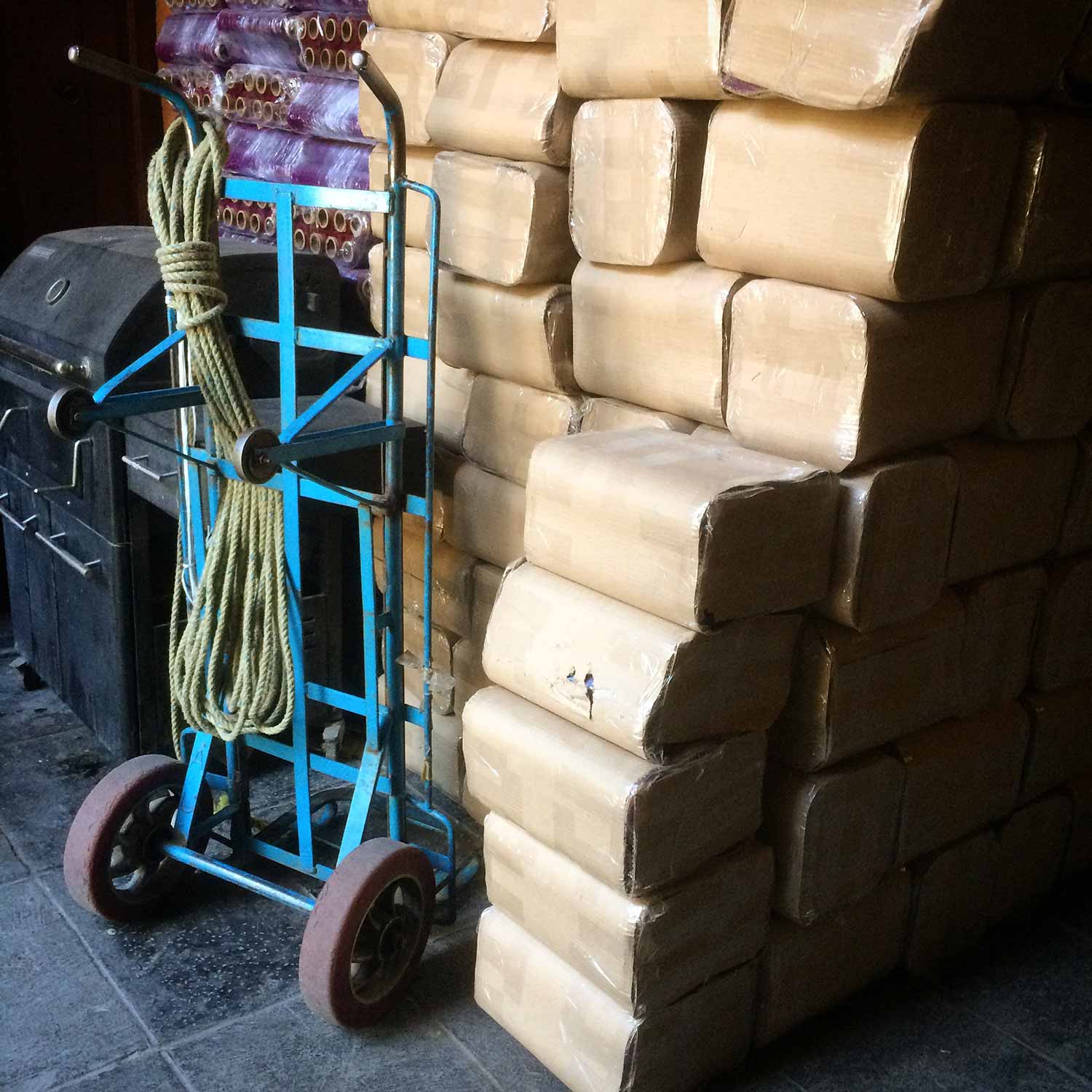 “These guys you’re seeing, the Diableros, they make this whole place run.” These carts were fantastic: all steel, with more framing and extra support welded on than I’d ever seen on a cart in the US, with solid primary wheels and sets of secondary wheels which allowed the cart to be worked flat if needed. On many of them, several yards of rope were draped over the top, for securing cargo. About half the time, men were walking by with empty diablos, and the carts looked like they weighed 100 lbs without a load. Then I’d see one drive by with an incredible load: huge spools of conduit, or dozens of cardboard boxes roped upon the cart, appliances perhaps, or stacked crates of fruit as the Diablero expertly maxed out the diablo’s surface area with whatever needed to be hauled.

Chucho explained that, as he understood it, most of these men traveled into La Merced from surrounding towns and exterior, far-flung neighborhood of the city. The carts are rented by the day from folks who run rental shops solely for this purpose, and the cart operators, Los Diableros, spend their days hauling anything for anyone who needs it, getting paid a small, negotiated fee per haul. And many of them, he told me, just sleep in the area overnight. The money, which isn’t much in relation to the amount of labor involved lifting and pushing and walking all day, is saved up and taken home – maybe per week, maybe per month. It was day labor, sans contract, and the diablo was the ubiquitous tool of this labor.

My entire conception of what Diableros are came from observation and, importantly, conversation. I didn’t research anything other than what I saw and what people told me. I started drawing these carts – which wasn’t easy, because they were always in motion. I’d see one cruise by and notice another detail I’d missed–flat steel welded over the tops of the wheels, or the way the framing around the secondary wheels was attached. Getting the angle on the wheels in my drawing was driving me mad! 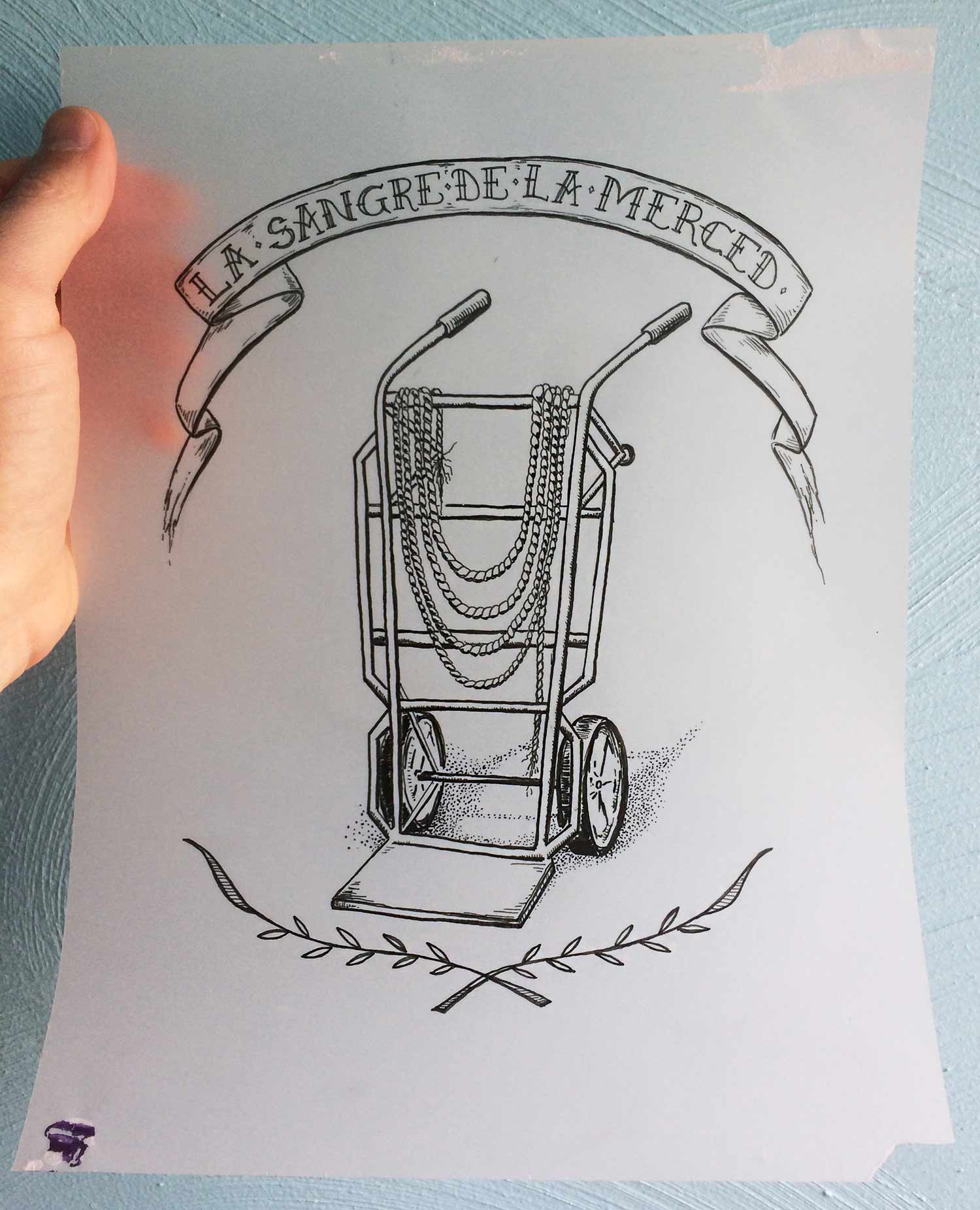 the finished drawing on vellum

I was looking for text to round out the design and kept talking to folks: if these carts and the men who work them are integral to the movement of this commercial area, how would you explain this in an “emotional” way, with a slogan? Again I asked Chucho: “I don’t know, maybe they are like veins? Because they are always in motion, you know, flowing. Or really they are like the blood of the Merced. This maybe sounds too dramatic, the blood! But it’s true.”

I finished up this design that evening, drawing up the text under a lamp in a shared room while Paul worked out his design (also about Diableros) on his computer from photos he’d taken that day with Aaron, Nikki, and Becca already sleeping. 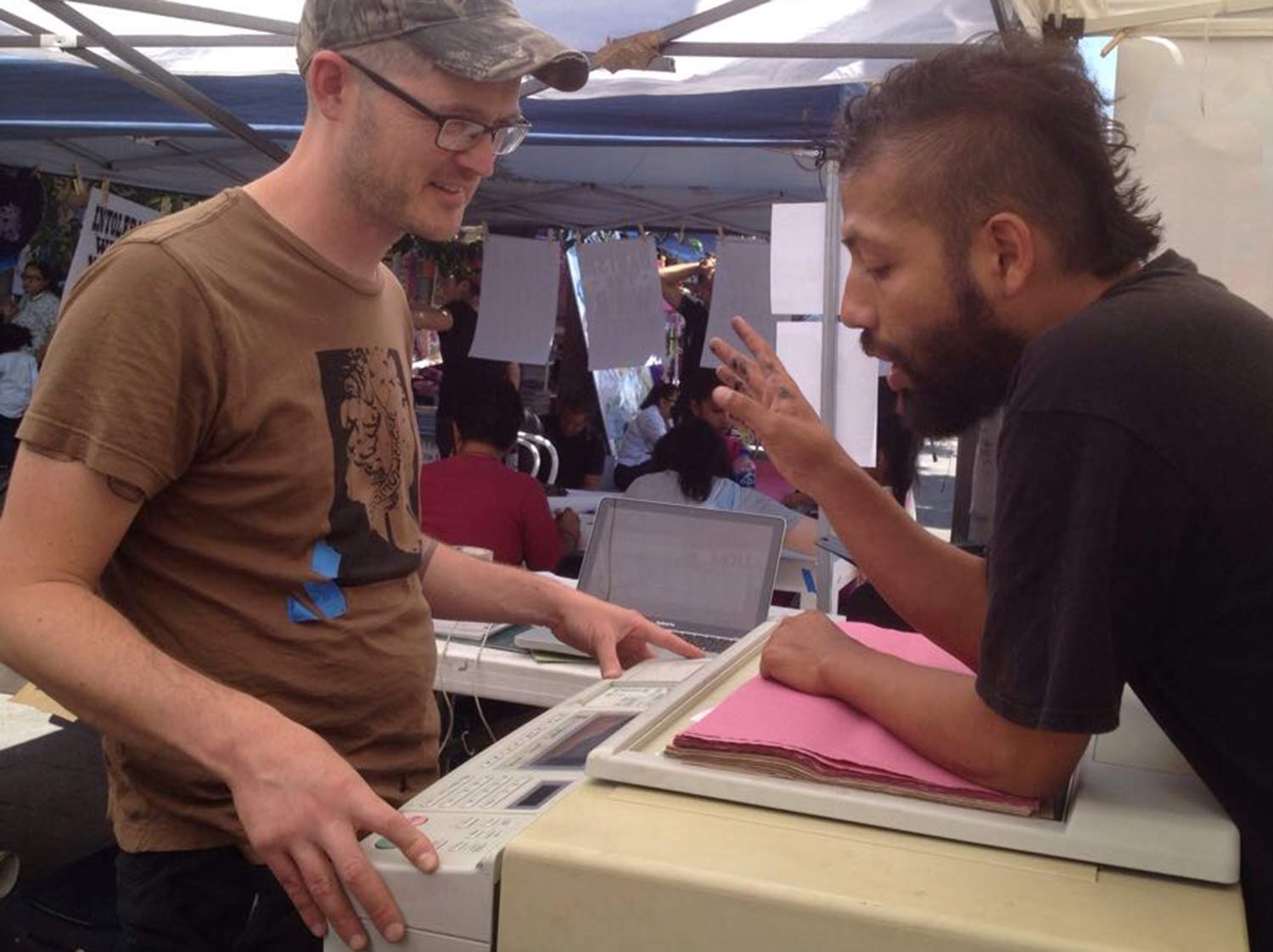 Maiqo and I discussing the process, leaning on his Risograph

The next day I set about printing it as a poster on a Risograph, with the expert help of Maiqo. This guy is intimate with his process, and it was really exciting to work with someone who knows all the little bumps and workarounds he’s learned to make his machine work! He convinced me to do a two-color print with a second (red) layer. It was really fun working with Maiqo while we battled heat and baffling paper feed errors, and told the children hanging out that their drawings would be printed really soon (we promise!). 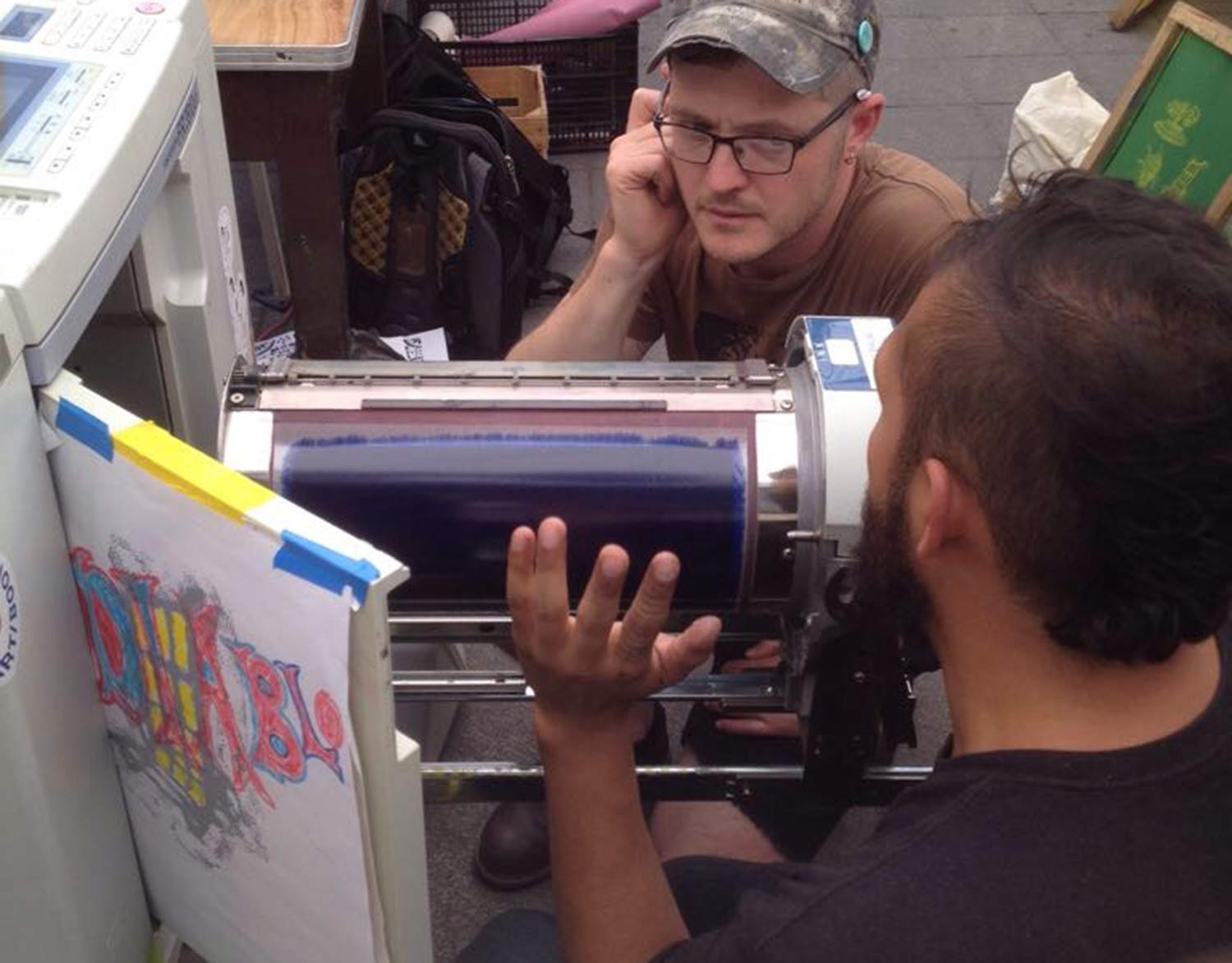 Sometimes a paper jam can be cured by popping out the toner drum, sometimes not… 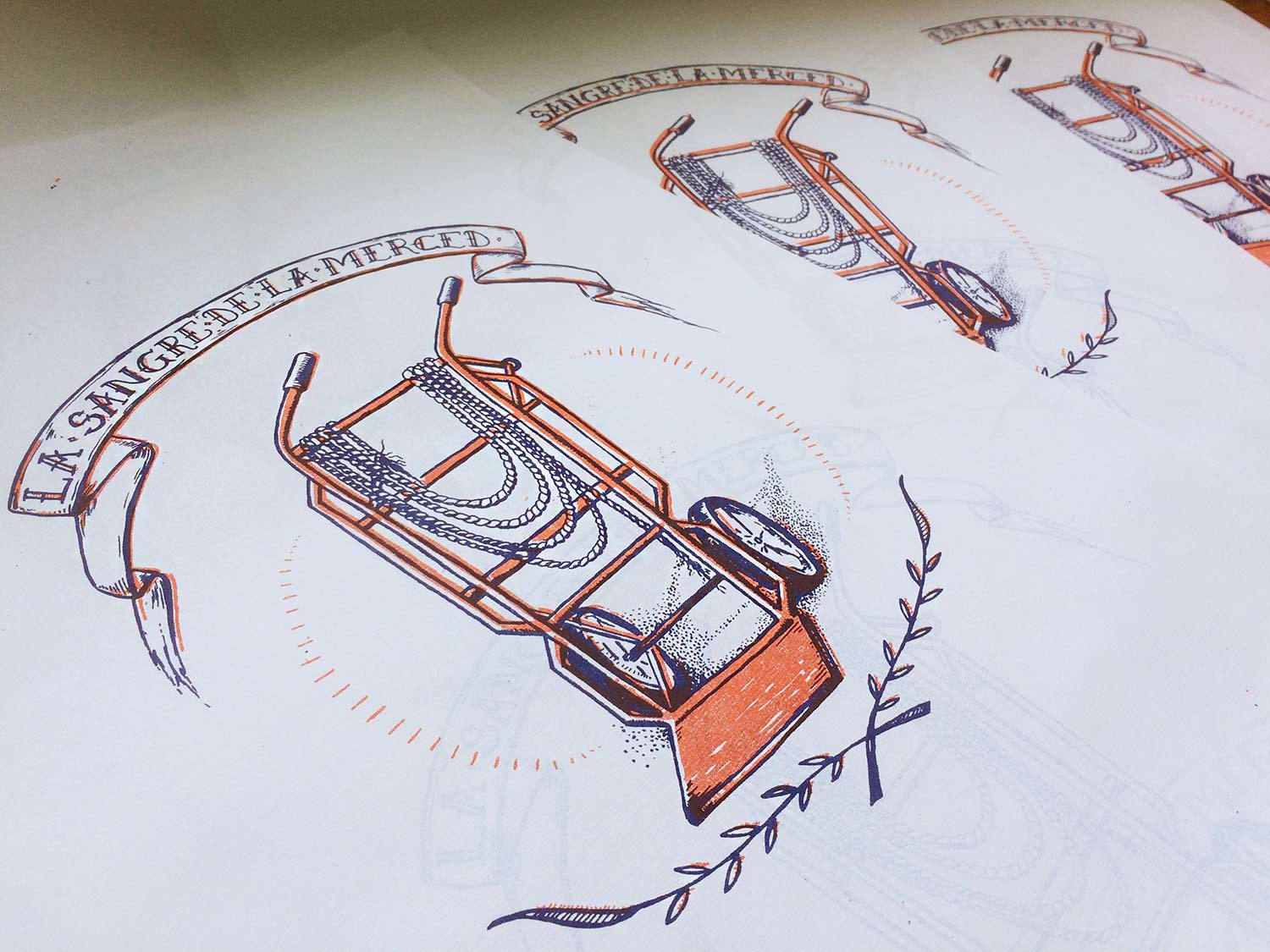 Meanwhile, I burned a screen of the design too, with the help of the El Día de la Impresión collective. These guys burn screens in the sun, and rock a great carousel set-up that kept passerby printing from several designs all day long… 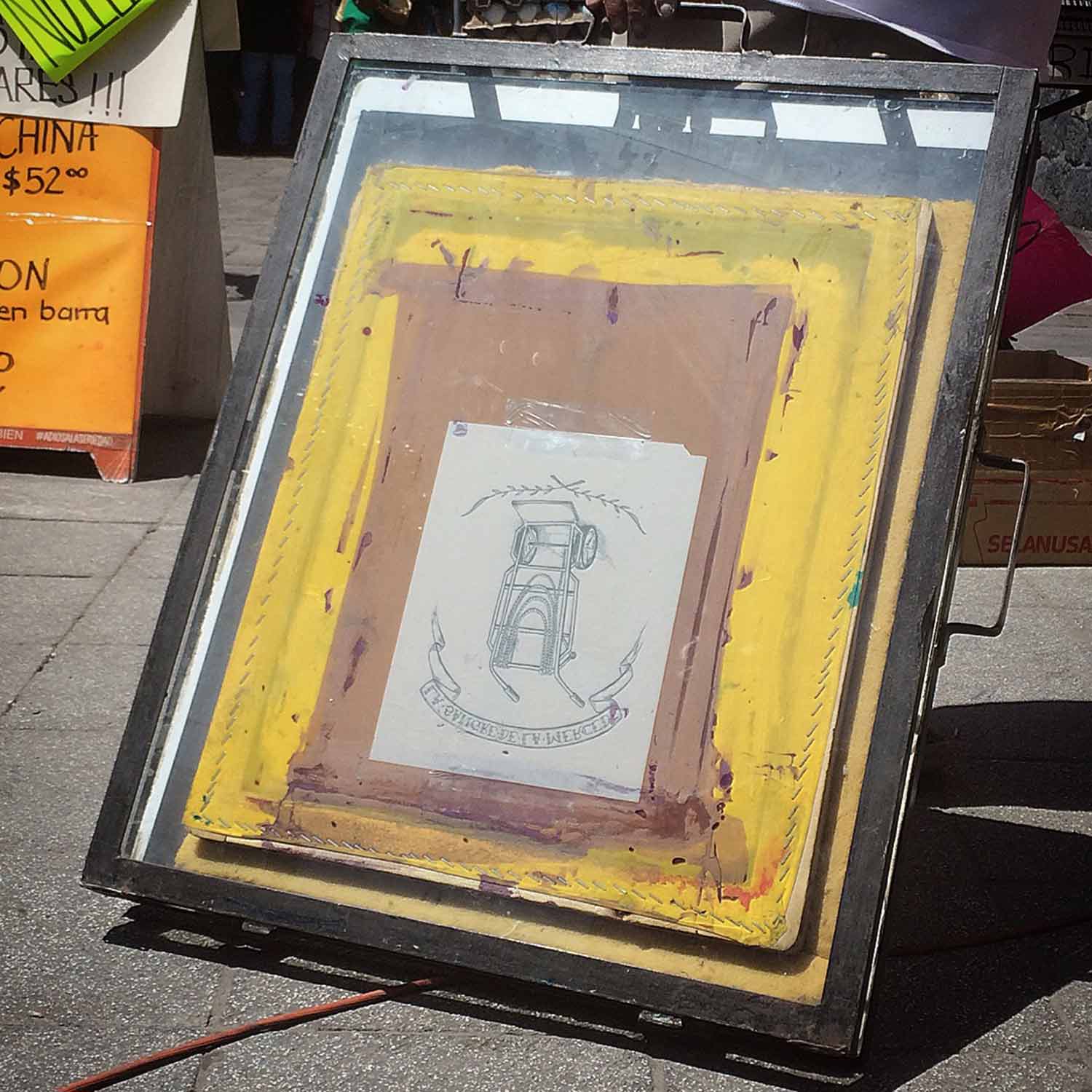 burning/exposing a screen in the mid-afternoon sun

They don’t just print for people, they show them how to do it, and everyone gets ink on their hands. It’s contagious to watch. Friends started printing shirts with my illustration, which were easy enough to buy from nearby vendors. 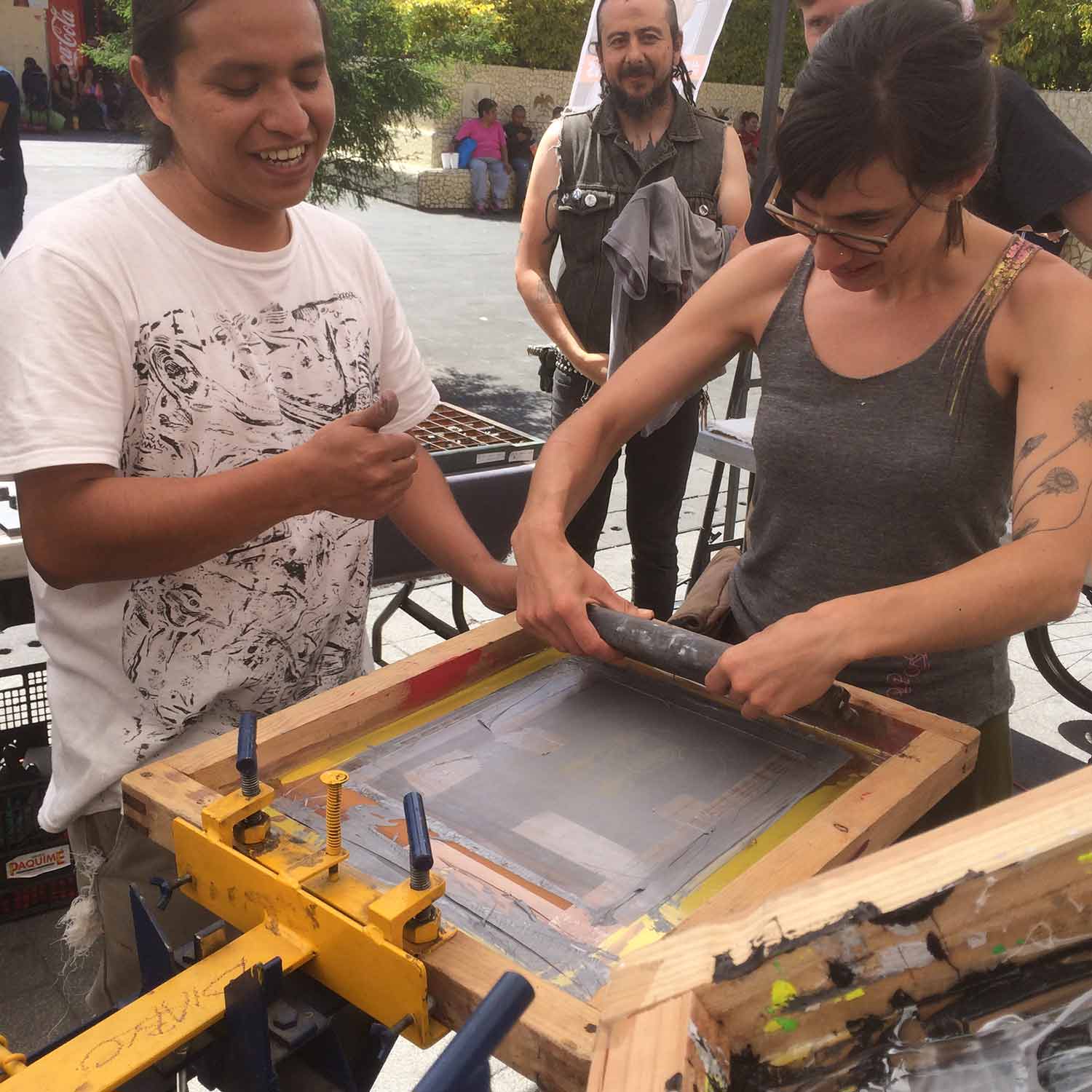 But the real magic happened when Chucho took off with one of my diablo posters and a megaphone, and found a group of maybe 15 Diableros who wanted to print the design on their t-shirts and aprons. I looked up from Maiqo’s humming risograph to see a group of men strolling over, all of them rolling an empty cart with them, to our print tent. They parked all their diablos up in a line, and just started pulling off their shirts and aprons to print! Everyone laughing, smiling, joking, printing shirts soaked in the day’s sweat with Chucho’s help… 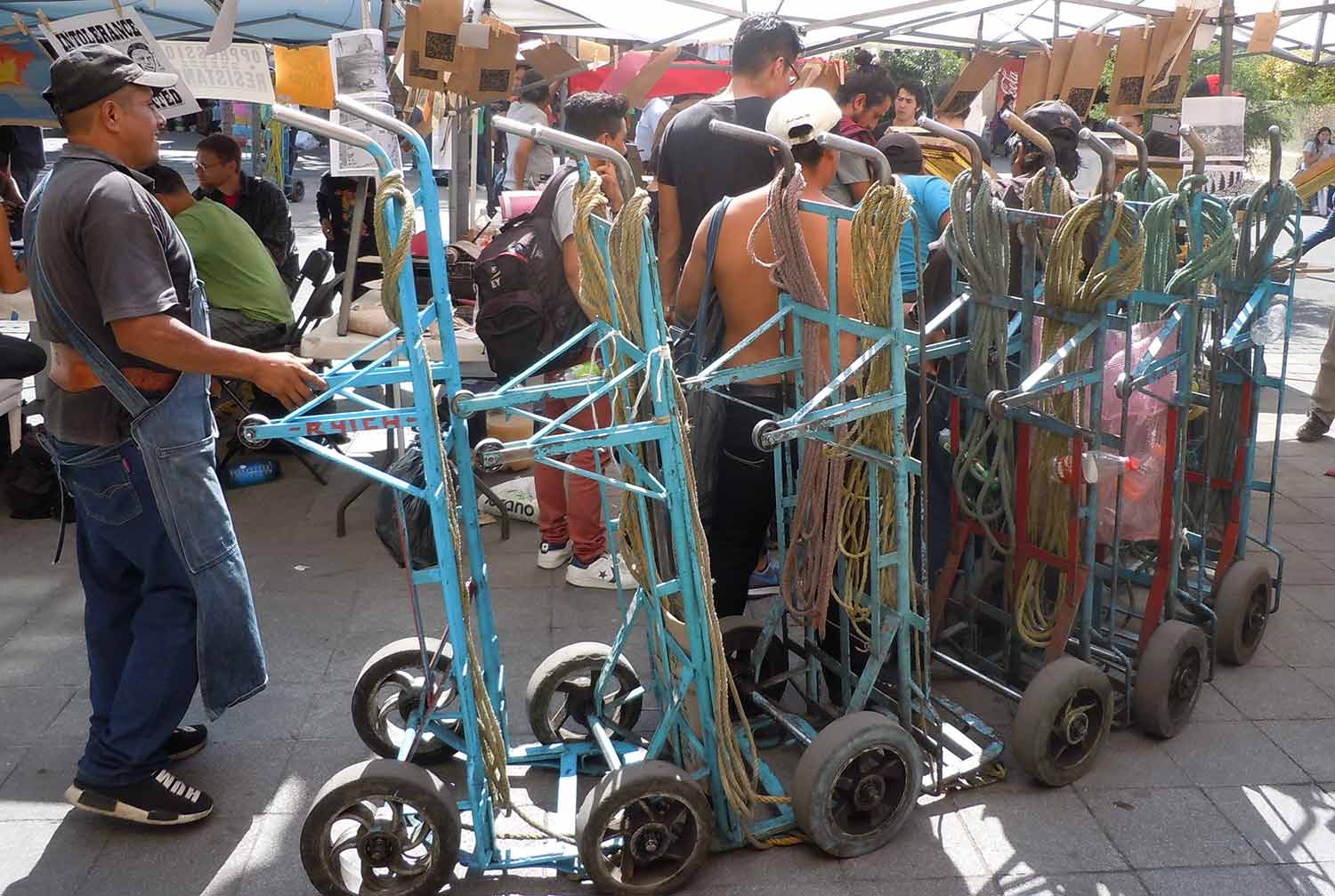 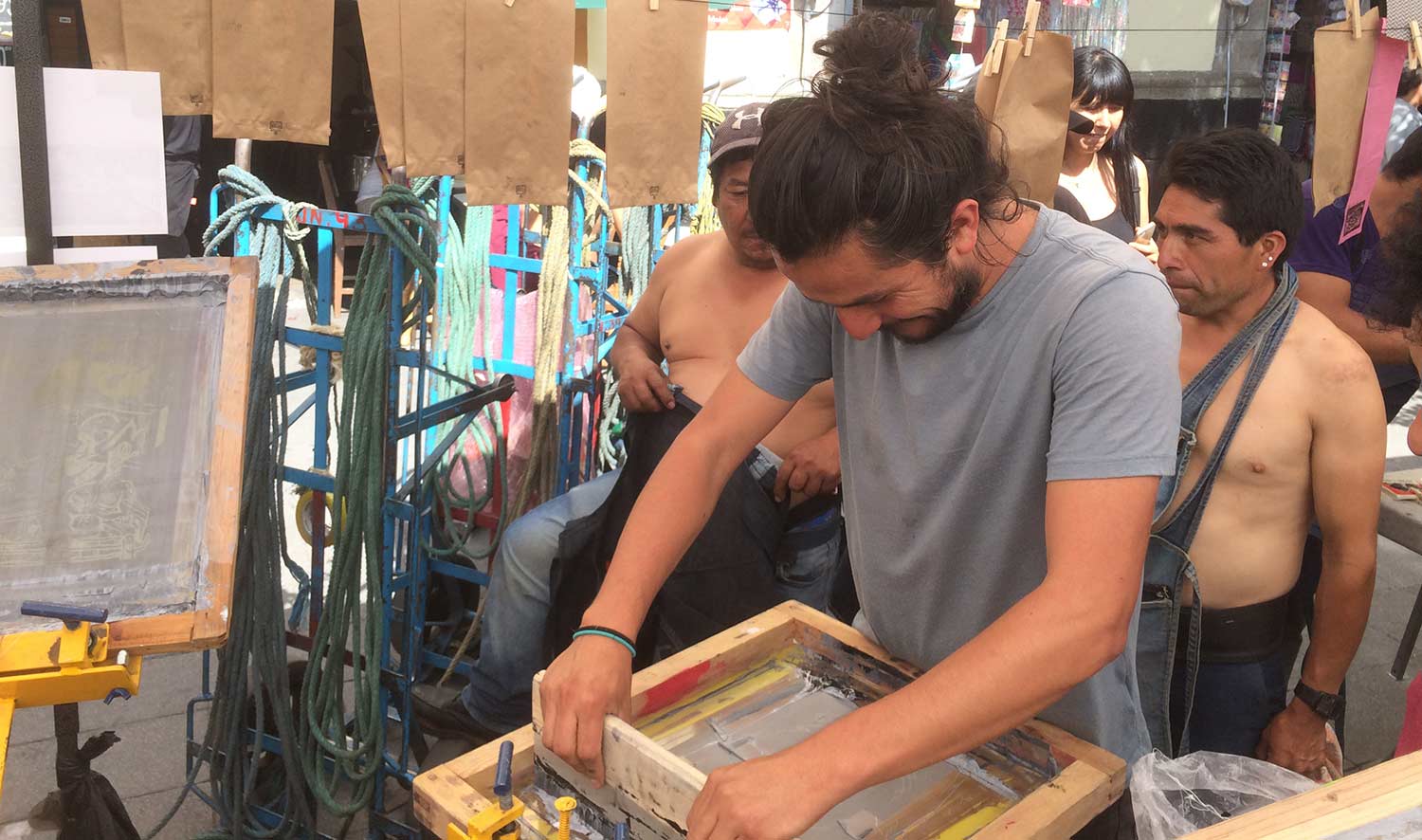 All of this made for an amazing moment. It was tough working in a place I’d never been, trying to illustrate something relevant that would resonate with the people in the neighborhood. And it was amazing to see that actually happen, to create an image and see people really desire it, identify with it, and want to print it on their clothing because it spoke to them. To hand that image out for free, or watch people learn how to print in the process of reproducing that image, was powerful. It was a beautiful reminder of why I got involved in making this kind of work years ago, and why I agreed to join the Justseeds family and stay. 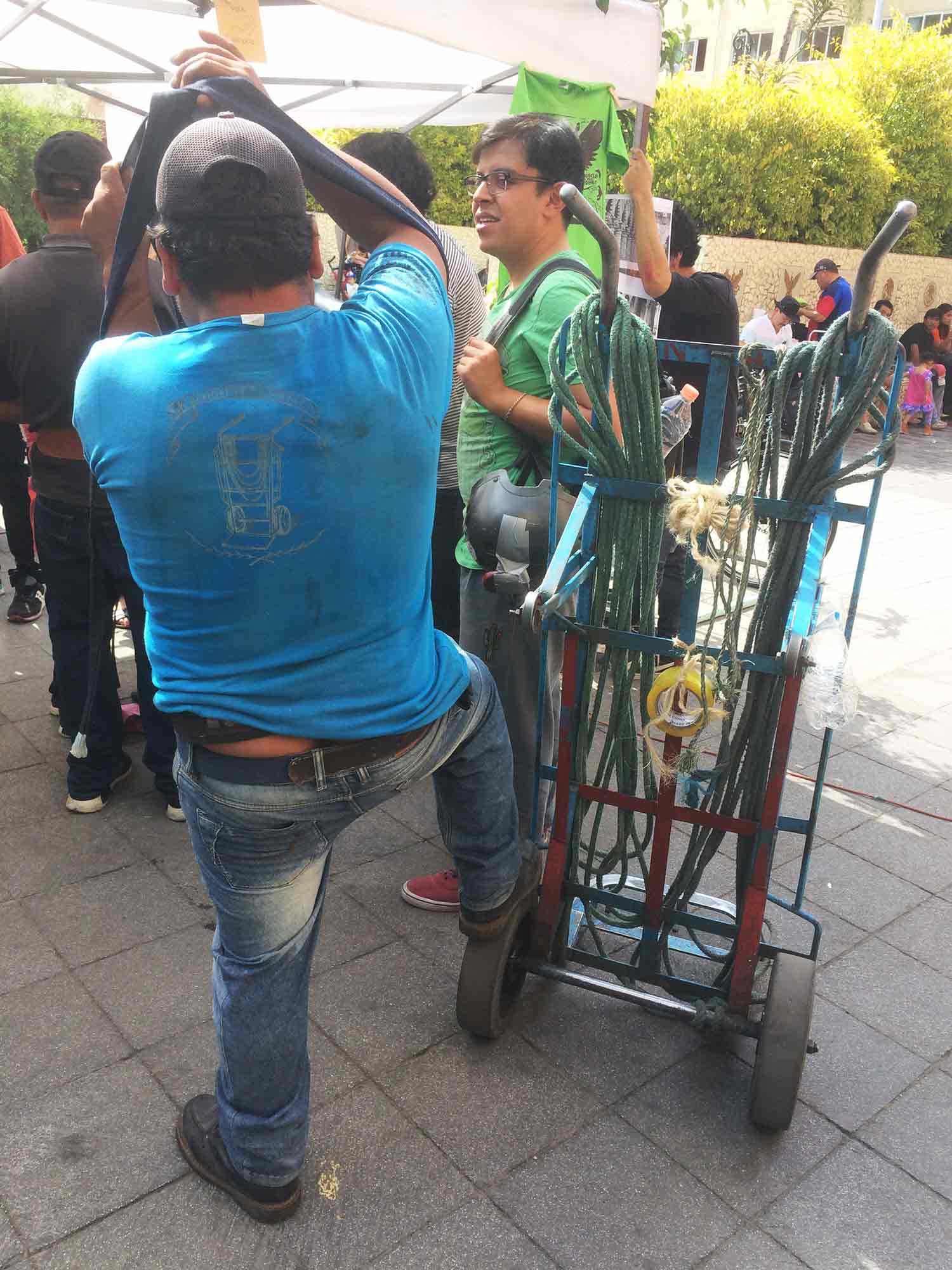 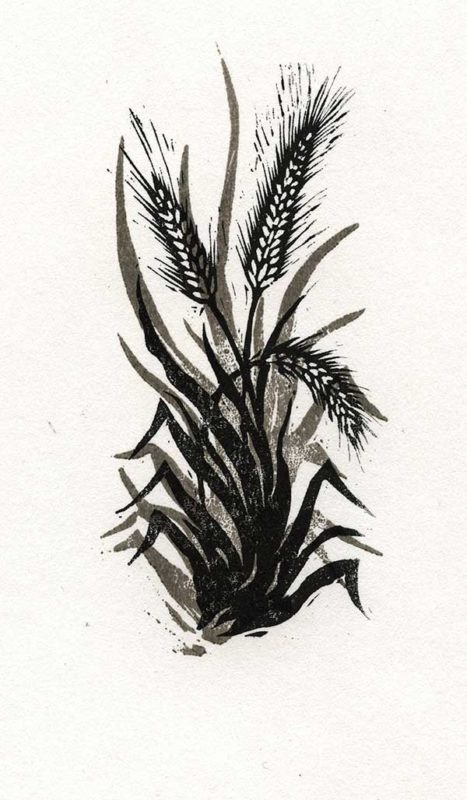 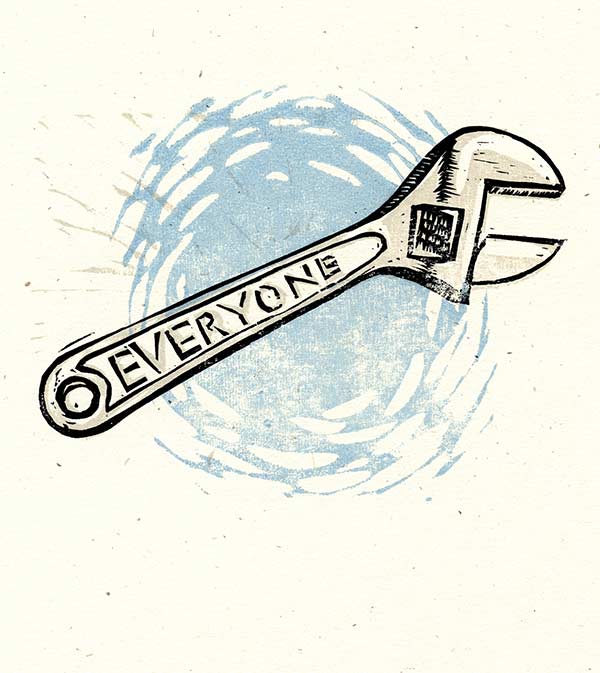