In 2016, I was invited to contribute art to the re-opening of the Robert Morris University School of Nursing. It was a great opportunity to explore some ideas around nursing, nurses, and self-representation. With this series of work I tried to move beyond the archetypal image of the nurse as a young white woman in scrubs, comforting a patient in an inpatient setting. I wanted to show a more dynamic nursing practice, one that recognizes that nurses are the largest group of healthcare workers worldwide.

I attempted to make paintings that showed nurses as agents of change and action (as opposed to images that show nurses in reactive or subservient roles). I also hoped to show work that recognized the centrality of the modern (Nightingale) model of nursing, but also acknowledged the central role of indigenous healers, nurses, and midwives in communities from the dawn of history to the present day.

I had originally hoped to produce more examples of nurses throughout history and from many different parts of the world. But I found information and images of historical healers to be pretty slim! (along this line, it is worth noting that if anyone is interested in nursing research, especially pre-Nightingale and non-Christian nursing history, there is a real dearth of available scholarship). Also, in preparing for this project I re-read a lot of mainstream nursing history, and it was interesting to note how much of the basis of nursing is built upon a revisionist agenda that was propagated by Florence Nightingale (amongst many others)- one that wanted to reposition and reframe nursing as a calling for proper ladies; and to move nursing’s reputation away from the poor women, healers, and women who were forced to work in nursing following convictions for prostitution and theft. This has carried over in to our present day with all the kitschy imagery of nurses as angels and the insistence on professionalizing nursing education towards baccalaureate programs and the denigration of associates degree and diploma nursing programs.

I created eight paintings then, largely based on the wholly random factor of things I could find images for, or ones in which I could imagine settings. I’ll give brief descriptions below of the paintings, in the order in which I made them. The public health nurse- This is probably the most classic historical nursing image of the set, a nursing role idealized in mainstream nursing history and one in which I find inspiration as well. This landscape and the outfit were based upon pictures of public health nurses of New York City in the 1920s, and owes a historical debt to Lilian Wald and the Henry Street Settlement movement. (I would also like to give a tip of the hat here to Emma Goldman, a working class woman, an immigrant, an activist, and convicted criminal who worked as a visiting nurse in NYC for ten years). The second image was based on the barefoot doctors movement (which sprang out of the Cultural Revolution in China in the 1960s), which trained rural men and women in first aid, preventative health care, acupuncture, nursing, herbalism, hygiene, and nutrition. The barefoot doctors had more in common with mid-level practitioners than with nurses per se- but I think this model continues to present a compelling and low cost way to bring health care away from the chronic disease/tertiary/acute care model. This image is of a street/harm reduction nurse, that was the idea at least. Some images are hard to get and sometimes I have hard time with spacing, bodies, dimensionality. This image got reworked a lot, and I was never quite happy with the way their bodies existed in space. Anyway, this was one image based on work that I’ve done and also based on the great documentary Bevel Up, about harm reduction and nursing outreach in Vancouver, BC (you used to be able to watch the whole thing online, now I can only find a trailer) This image was also inspired by harm reduction and especially by the nurses who worked in palliative care during the AIDS crisis. I was especially influenced by the fierce nurse featured in the great documentary We Were Here (on Netflix, amongst other places). This was also inspired by the work of Stuart Fisk, a nurse practitioner, who helped run a DIY palliative and hospice care service out of an SRO in San Francisco in the early 1990s, and who was also a mentor to me when I was working on establishing wound care services at the needle exchange in Pittsburgh. (And I should also note that the setting for this image was an homage to two great punk record covers- X’s Under the Big Black Sun and the Poison Girls’ Songs Of Praise) The first few images felt pretty dark and full. I wanted something lighter and looser feeling and I found an image of young women who were community health workers. I used that photograph as the basis for this painting. The tree is a plum tree and I enjoyed making this painting the best of bunch. The sixth painting was based on an image I found online in searching for indigenous midwives and healers. This one shows a woman gathering Queen Anne’s Lace (or Wild Carrot) a contraceptive and abortifacent. Appropriately, the final painting was done in an insane and stressful rush to meet the deadline- I think I did this over one day and as soon as the paint dried I’m pretty sure it was packed up and sent off. I wanted to make an image in a nod to my current practice in critical care- especially of being on the critical response team in my previous job- of codes being called in the hospital and the absolutely insane amount of people who will fill in to a very small space. It might take a minimum of five people to run a code and that would be if there’s no complications- it generally takes a bunch more, and then there’s all the other people who show up and watch and witness and learn. This image is based on my old place of work where scrubs were color coded and the nurse all wore light blue, the situation will have a few people doing compressions, one person preparing rescue medications, respiratory therapists on the airway, and the person running the code. Also there is a modern practice of bringing in families during the arrest, so that family may understand what is happening, and I tried to picture that here as well. I find these moments in the hospital to be frightening and exciting when they are not my patient, and pretty devastating when it is my patient. I wanted to capture the weird mix of emotions and reactions here (though I think I did not quite convey the wide eyed stress), and symbolically I also wanted to block out the patient in the image as much as possible, as during these moments of resuscitation the patient becomes almost completely alien and alienated (you’ll find more people staring at the monitor than at the patient), they are body and a pulse and a pressure and an airway.

For inspiration for this project I relied heavily on some google image searching. I also relied on the textbook Nursing: The Finest Art, which provided a wealth of historical and modern images about nursing. This text makes a decent effort to cast a wide net for nursing imagery, but its coverage of international nursing is pretty paltry and it ultimately plays in to many of the classic nursing/angel stereotypes.

Also, I would like to note a huge inspiration for visioning nursing differently was the work of California artist Jenifer K Wofford (http://wofflehouse.com/) whose moving and beautiful images of Filipina nurses trudging through water beautifully subverts the imperialist motif of Douglas MacArthur while at the same time envisioning a dignity, grace, and momentum to these working women.

Thank you for this! Found this by searching for ACT UP art archives. Yes. We must continue to work to honor all nursing history instead of dote on the nursing school crutch that is Nightingale history/model.

Thank you, Alec!
These images, yr writing, and the visualizing of nurses as powerful independent healers – all beautiful and inspiring.
Have you seen the little book “Witches, Midwives, and Nurses: A History of Women Healers” by Barbara Ehrenreich and Deirdre English?

Thanks for you the nice words Betsy-
I did read “Witches, Midwives, and Nurses” but not for a while. I was a little disappointed reading it, as I’ve always liked Ehrenreich and was interested in the subject matter, but when I read it, it felt a little anti-nurse to me. I did think about it in context, being 1973 and all, and the idea of nursing being tied up with a very conservative view of what women could be or do, but it seemed to me to be saying that women are nurses- but they have been and could be so much more. So, for the early 1970s appropriate- but it felt a little dated to my experience of nursing. Is it worth a re-read?
Silvia Federici’s Caliban and the Witch felt like it worked with a lot of the same ideas, worth checking out if you haven’t…

Lovely, just lovely, thank you so much for this work

Thank you, Alec. I thoroughly enjoyed looking at your paintings and reading your explanation of each. When I looked at the second one, I was sure you had painted a representation of Mary Breckinridge and the Frontier Nursing Service in Kentucky started in 1925. The nurse-midwives at that time all rode horseback to reach their patients in the remote hollers of the mountains in rural Appalachia.
Another source for pictures (and leads to other sources) and for nursing and midwifery history is the book “A History of Midwifery in the United States: the Midwife Said Fear Not” written by Helen Varney and Joyce Thompson and published by Springer Publishing Company.
Robert Morris University is privileged to have your very powerful and dynamic paintings representing nursing and midwifery.

Just happened upon this! Really wonderful pieces. I am a harm reduction nurse working at Insite in Vancouver and have done a few years of street nursing. Bevel Up is now officially on-line for everyone to access https://www.nfb.ca/film/bevel_up_drugs_users_and_outreach_nursing/

Thank you, and thanks for the link! 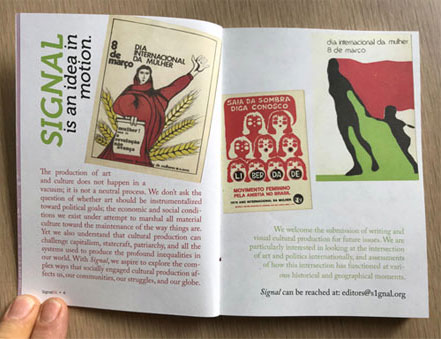 Fresh from the printers is the sixth and latest issue of Signal: A Journal of International Political Graphics & Culture. Signal is edited by Josh MacPhee and I and it… 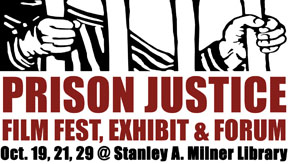 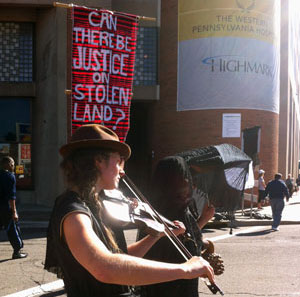 Pittsburghers for Italian Pride without Genocide

Here’s some photos from some friends here who did a creative action during the Columbus Day parade in Bloomfield (Pittsburgh’s Little Italy). The pictures speak for themselves, a small group… 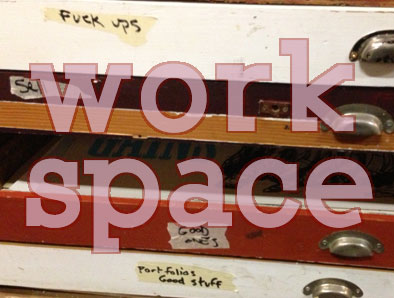 Here’s another new series which I’m going to do for the blog, in which I ask members of Justseeds to take pictures of where they make their work, ask them…