Arofish is a stencilist currently residing in London. He promised to greet our “intelligent, subtle, carefully thought out questions . . . with a load of boorish, superficial, irrelevant, conceited self-promotionism (well, I am a graffiti artist after all…),” but actually ended up giving us one of our best interviews yet.
How did you first get involved with street art? How did you find your way to stencils?
I came to London a couple of years ago and the stencil graffiti I saw just blew me away. I’ve always had a little bit of skill for drawing but rarely ever had the urge to produce anything. Until I came here, graffiti to me just meant the wildstyle, new york hip-hop stuff you see. That’s often incredibly beautiful and skilled but it still just comes down to writing your name and I wouldn’t personally bother trying to get good at it. Ironically, a lot of those artists piss on me in terms of technical skill. What limited drawing skill I have (and I draw everything I do ) is with pen and pencil, hence stencils. (And of course the exposure time is minimised too)

Did you start out making political art, or was this a later development? Did someone or something catalyze a change in direction?
I came to graffiti from a background of political activism, which is why doing art in Palestine and Iraq was a sort of natural extension of both elements.

How long does it take you to put up a piece? Do you have any technical tips for those interested in large-scale stenciling work?
How long is a piece of string? Seriously, there are so many factors involved. The tips below may elucidate some.
Tips, in no particular order:
— If it’s a high risk area, recce it first a week before, on the same night (same time) you’re gonna do it. If it’s pigged out, pick another night or another spot.
–While you’re there, CHECK THAT THE SURFACE WILL HOLD YOUR TAPE, or whatever you’re using to stick up your stencil. Some paint can soak into some porous surfaces with barely a trace; also worth testing.
— Plan absolutely everything you can beforehand; chances are it WON’T just sort itself out when you get there (you’ll have enough to worry about)- and your hard work could go for naught. Taking the time to section out your large stencil into smaller jigsaw pieces is worth it; you can fit them into a folder instead of walking around with a huge rolled up package. It’s also easier to keep them flat (essential). And to get them away again. Smaller pieces are easier to work with if it’s blowing a fucking gale. A drawback is they can take longer to match up and there’s more of them to stick.

— A word on sectioning- don’t just take your big, (already cut out) stencil and hack it to smaller bits. You’ll probably fuck it. Get your artwork (on paper) and cut it into measured pieces first. Number/letter them and make a note of how they fit. Now cut the stencil card, which is separate, into individual pieces, for your paper “jigsaw pieces” to be glued onto. The pieces of card should be bigger than those of paper, perhaps an inch margin on every side. Depends. Take the time to cut little “register” holes in (or develop your own system, so you’ll be able to match them up accurately when you’re working by streetlight and worrying about cops.) The margin overlap means you’ll have to take one piece off before you start the adjoining one. That’s where the register holes come in; you should be able to spray through them and match up your next section on the spots, crosses or what ever they leave. Paint them out at the end.
—Too much tape is better than too little.
—You can sometimes use the lines of bricks for your verticals and horizantals.
—A nervous lookout can be a bigger curse than no lookout at all.
—When you arrive at your spot, take the time to “smell” the air. Spend 5, 10 mins wandering about, talking to yourself on your mobile, looking around and seeing how it sounds and feels. If at the end of that time you feel that there’s a troll under the bridge, it may not be worth starting a big piece.
—If it’s gonna take a while, and you’re a repeat offender, hide your “tag” stencil (if you use one) elsewhere till the end. That way if you get pigged, they can’t tie it to everything else you’ve done.

–The more intricate and detailed your artwork is, the more of a fucker the stencil will probably be; you’ll see what I mean. There’s no one ideal material though. A lot depends on the picture itself. Thinner stuff (like acetate) allows more (knife) detail and a sharper spray but the floppiness can make for a nightmare.
— Take a cloth to wipe wet surfaces before sticking.
— Smoother surfaces give better detail.
— Use street furniture like bins, milk crates, etc. to stand on.
— Spraying your work on big paper will be a good test of how it looks, and you can always use it to remake the stencil if you have to abandon your stencil and run.
— If you’re pigged and there’s a chance to run, never hesitate on behalf of your stencil; precious it may be, but you’ve already lost it.
—Don’t be afraid to touch up your work afterwards with a marker; the best of us do it.
–You know the distance you have to spray from; it even tells you on the can. SO STOP MOVING IT CLOSER.
—Once I was painting a huge piece in central London at 5 in the morning. 4 cops came up to me. the 1st was plain clothes and I didn’t see the rest immediately. He asked me, jovially if I was cleaning the wall. Thinking this a joke, and he just some random guy, I replied, laughing, that I was. Then I saw the radio in his hand and the 3 uniform behind him. “Oh, no problem,” he says, “someone thought you was graffiti-ing, that’s all”. I pull a rag out of my pocket and pretend to wipe the wall. “No mate, contract cleaner, ” I say. It was raining lightly, so it was not suspicious that I had my hood up. I was also wearing a high-vis vest. I continue my sad charade, expecting the joke to be over any moment. After a few seconds I turn round and see them walking away, back to their van. I stayed another 10 minutes and finshed off…

For your Ariel Sharon piece, it’s clear that specific placement was part of the plan. Do you usually work this way?
When a piece of graffiti actually interacts with its surroundings, you’ve achieved something higher than just a picture on a wall.
What was it like to travel through and put art up in war-zones? Did you approach the work differently than you would in London?
I get a bit uneasy by the description of this place or that as a war zone. The notion of wars and war zones is something which ought to be thought through more thoroughly; if you ask Bush, the war finished long ago and the rest of it since then (Fallujah et al) has been a matter of winning the peace. These are dangerously loaded words; like terrorism, freedom, etc. Shimon Tzabar’s book “the white flag principle” discusses minutely the conventional notions of conflict, victory and defeat and points out the very real advantages to losing and the enormous potential burdens incumbent upon a supposedly victorious nation. In Ireland, one person’s war was another’s “high level of crime”. The situation there bore almost no relation whatsoever to Bosnia in 1992. There are times when you can spend weeks in parts of Palestine without the slightest sense that you’re in the middle of a war. Sorry if all this seems a bit tangential to the question but I have a concern that a certain alien status is conferred upon places of “war” by all kinds of different people which can have so many negative ramifications, even when those people might think they mean well. Many people go to Palestine every year to engage with the ISM or similar, and some are attracted by the idea of an adventure in a war zone, which label, besides being a plain insult to people who live there, enforces difference and otherness.

Since information on the subject is relatively limited, could you speak briefly to the general conditions in Iraq and Palestine? How was your work received there?
I’ve never met a Palestinian who had a good thing to say about the occupation there. In Iraq, I met many, which was one of the biggest surprises. I could say that everyone was univocal against the occupation and my work went down a storm, but the truth is it got mixed reactions in Iraq for various reasons; ultimately beyond the scope of an interview like this. it’s a very complex, divided society where paranoia and suspicion operate in all sorts of ways. You become very conscious of your own ousiderness, even when you’re made very welcome. I don’t pretend to a deep understanding from my short visit and I’m still figuring out the significance of certain things now. However, enough people liked enough of the work there for me to carry on with it. In Palestine, I only painted in the West bank as Gaza was closed to pretty much everybody for hunting season. I’ve lived there before and the insularity, being far more acute than in the West Bank, gives rise to a suspicion of outsiders more comparable with that of Iraq. As to the general conditions of Iraq, fucking miserable on the best day for most people. All I can say is I would be very reticent to go back there now. Those pictures that came out of Abu Ghraib are worse than bombs in some ways.

Is there anyone whose pieces you particularly look out for or are inspired by?
Blek le Rat is a Parisian artist from way back who I like very much, and I’ve just discovered an artist (I think American) called Swoon. And I like a lot of Banksy’s work, but mainly the older stuff. Sadly, there doesn’t seem to be much “perlitickul” stuff out there which also makes good art. A lot of people got on board for “No War” but most of what came out of it was pretty crap.
Check out Arofish’s website at www.arofish.org.uk
Subjects 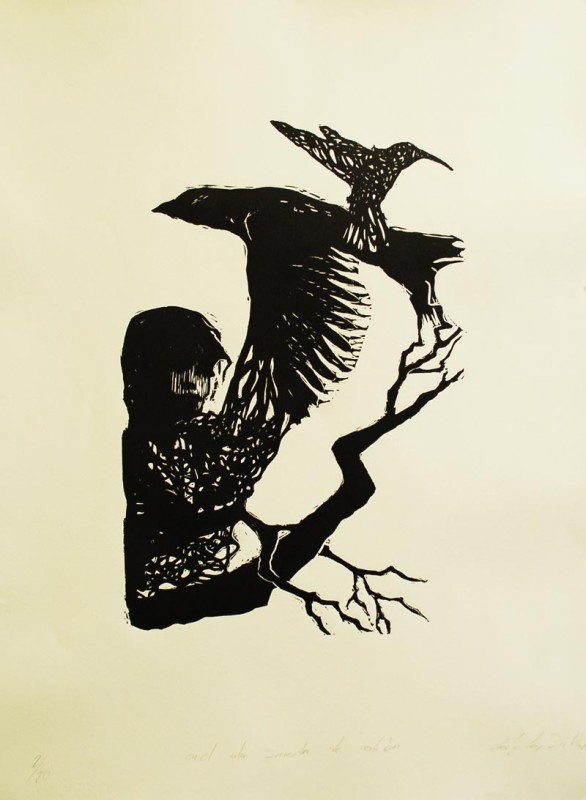 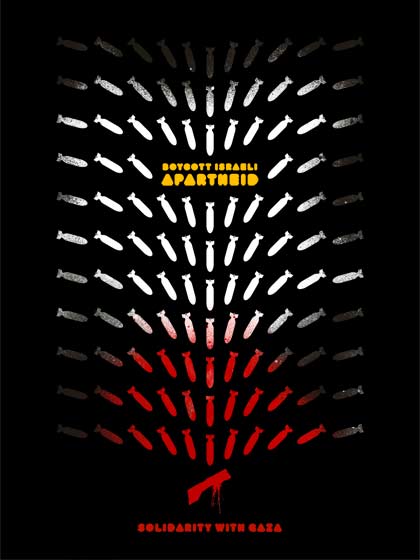