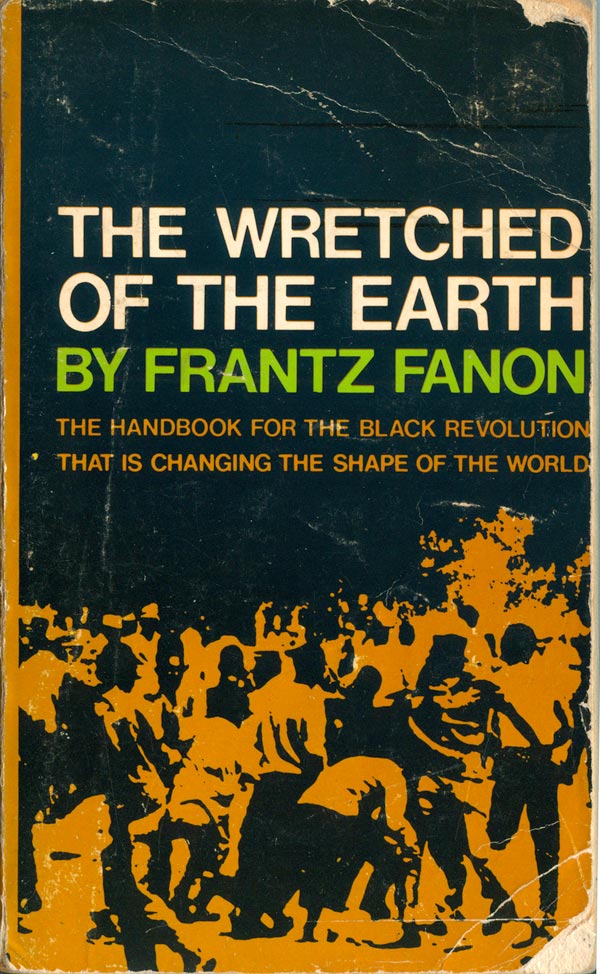 I can’t quite remember exactly when and where I was first introduced to Frantz Fanon. I do remember pulling down the pocket paperback to the right (Grove Press, 1968) off a shelf at a bookstore, and being intrigued by the orange and black mass in motion on the cover. I assume I knew who Fanon was, or picked it up because I had been told I should by someone, but those specifics have slipped away. Then again, if the title Wretched of the Earth didn’t completely capture me, I suspect the subtitle added to this American edition—”The Handbook for the Black Revolution that is Changing the Shape of the World”—would have been more than enough to convince me to fork over the $3 it likely cost. The cover is graphically compelling in its own right, with the orange and black bodies in motion at the bottom and the horizon receding to black. It is not exactly clear what is happening, but the fire-like shape on the right side, and the bodies leaning down to pick things up (rocks?), give the viewer a good sense that they’re looking at a riot in action. The top half of the field of black is smarty left alone, the middle is quite literally filled with sharp Helvetica (or a typeface very similar). It all adds up to being somewhat mysterious but absolutely intriguing.

A couple weeks back I took a detailed look at the cover to Stokely Carmichael (aka Kwame Toure) and Charles Hamilton’s Black Power (see HERE). That led me to thinking about what the international equivalent of that book would be: The Wretched of the Earth, of course. First published in 1961 in French as Les damnés de la terre, it is Fanon’s justification of violence in the Algerian liberation struggle, and by extrapolation, the violence used by all oppressed peoples (the “wretched”) to overthrow their oppressors and become full human beings. The book was originally translated into English and published in 1963 by Grove Press, and the cover of the first edition hardback is to the right. Fanon’s book arrived in the U.S. just as the Civil Rights Movement was heating up, and was still strongly framed by the SCLC andMartin Luther King, Jr.’s commitment to non-violence. As such, Wretched was ahead of its time here, a book written for the Black Panthers published almost half a decade before they were to exist. The cover reflects this, being composed entirely of type, which is strong and compelling, but hardly creates a design for “A Handbook for the Black Revolution.” Instead this is the cover of Wretched as “A Negro Psychoanalyst’s Study of the Problems of Racism & Colonialism in the World Today.” Ahh, quite a mouthful.

While the dust jacket for the first edition quickly disappeared with the relatively rare hardback, the paperback cover must have been seen as quite successful. It appears that from its initial arrival—the copy I have is from 1968—it wasn’t changed until a full redesign of Grove’s entire Fanon series in 2003. A forty year run is not bad for a book cover.

Given the 2003 redesign (and a further updated design gracing the cover of a new translation in 2005), it’s no surprise why the old cover was so popular. For some reason Grove—and the designer Jackie Seow—returned to a pure type cover, and it just feels off. The type treatment falls somewhere between “pirate” and “African tribal,” and seems totally wrong for a book about the Algerian revolution. While the crispness of Helvetica titles nicely accented the explosive imagery on the 1968 cover, this new type is neatly stacked and tightly leaded, and feels stiff and posed, especially without any imagery to offset it. The 2005 edition doesn’t do much better, the addition of a portrait of Fanon behind his name on the bottom have gives us little more to work with, and borders of both redundant and strange, given that Fanon’s ideas are have been far more influential than his identity or image. Seow is not attributed as the designer on the 2005 edition.

[As a side note, almost none of the early Grove/Black Cat political titles have designer attribution, although almost all of the fiction, literary criticism, and plays do, usually to Roy Kuhlman or his design firm. I assume he did not design the political titles, or he would have been attributed.] On the other side of the Atlantic, Penguin was the publisher that put out Wretched in the UK. The first edition was able to find was from 1967, and has a cover designed by N. Baroni. It too bears an all-type cover, and like it’s U.S. paperback cousin, the type is clean sans serif. But this time the type has been stretched, cracked, cut, and bent, echoing both the “wretchedness” and “earth” in the titles, like the type itself was caught in a riot. A slight redesign in 1970 (I haven’t been able to track down the designer) stays with this general visual theme, but the colors change, and the font is much more weighty, it resists its wretchedness more. Typical of Penguin, Wretched received multiple face-lifts. In the 1980s we have a whole new type-driven cover, this time the degradation is made to each letter form, not the words themselves. Instead the type is arranged squarely and then cocked to the left, the black bars between title, subtitle, and author adding to a constructivist/modernist feel. By the 90s Wretched was squarely a “classic” text, and was added to the Penguin Modern Classics list, with requisite staid design. A photo of a downtrodden North African fills the entire cover, with the house-style titling boc laid on top of the photo in the bottom quarter of the cover. Something happened at Penguin in the initial days of the 21st century, and many of their books got period facelifts, as if someone there just discovered computers as a tool for book cover design, and went a little overboard. The Modern Classics list went through a bunch of changes in a short time, but I was only able to track down two new versions of Wretched. The first, from 2001, is one of the odder covers. Like the earlier Classics edition, it is a black and white photo, yet this time the type (Futura?) is boldly spread across the image. It is the image itself which is odd, the figure’s wretchedness offset by a similarity to some sort of pop star photoshoot, the figure looking strangely enough like Robert Smith from the Cure, or even Billy Joe from Green Day! In 2004, the settled back into the more apt 1990s image, but pulled off the titling box and replaced it with a clean silver line at the bottom of the cover. I wasn’t able to find the cover of the 1961 French first edition, but below is a 1963 edition from Francois Maspero. Next to it is the 1975 edition, also from Maspero. Both are clean and efficient, and fall well within the traditions of Continental book design. Below are more recent French editions from DeCouverte (2002) on the left, and Gallimard on the right. Although they’ve both added portraits of Fanon, neither really improves on the initial Maspero designs. 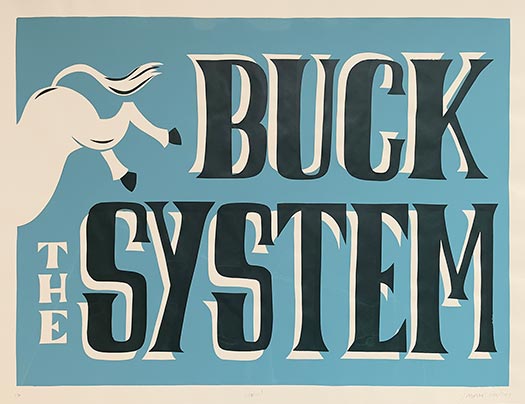