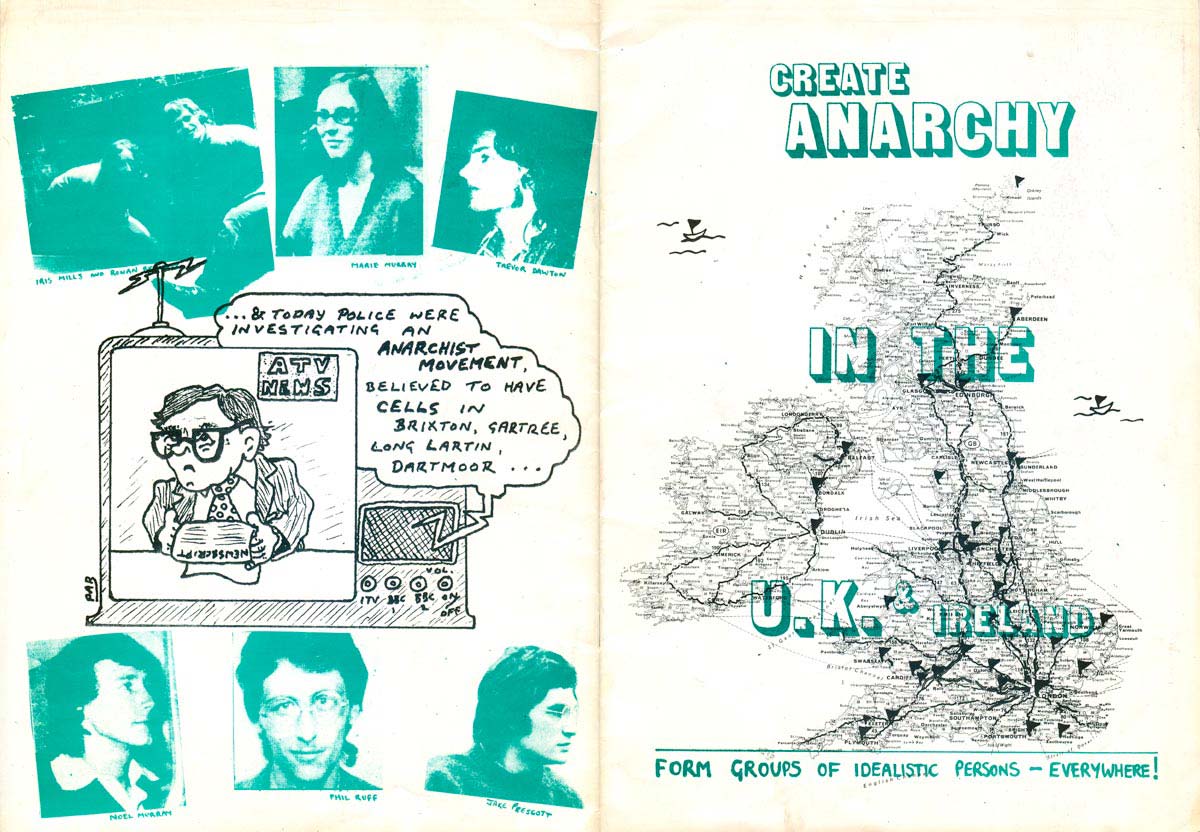 Welcome back to part six of my focus on the second series of the UK magazine Anarchy. Last week we looked at a series of covers done largely by anarchist artist Clifford Harper. This week we return to a bit more scrappy period for Anarchy. Harper appears to have flown the coop. The cover of #27 to the right is still strong, but functions better as a mini-poster than as the cover of an ongoing publication. There is no issue, no date, no price, and no clear masthead.

The title is hidden within a call to arms, which makes a bit more sense when you open up and see the back cover as well. Images of anarchists who have either been arrested or interrogated surround a comic mocking the mainstream media’s treatment of the anarchist movement. The comic is by Phil Ruff, who is also in one of the photos, a part of the Black Flag/Cienfuegos group, and a supporter of the Angry Brigade.

Ruff’s fingerprints can be found all over the inside of the issue as well, with more drawings and comics (including a hilarious little drawing of Bakunin reading Anarchy), as well as a return to full blown support for armed struggle. I also couldn’t help but share page 18, with these two walruses rightly detourned. There’s something about a witty word bubble correctly placed that is infinitely hilarious. Just timeless. Ye olde Anarchy calculator. Given the speed at which the tools of technology are changing, it seems inevitable that covers focusing on these will almost always feel anachronistic almost immediately. The graphing calculator here on issue 28 would have already felt out of sync with the 90s and the emergence of laptops in almost every home, never mind the cell phones in every pocket by the mid 2000s. That said, it does make for a creative way to structure a cover, turning the entire issue into a giant math machine.

The back cover is also strong, the slogan “Nuclear Power is State Power” has multiple resonances with today, especially given what has been happening in Japan post-Fukushima. The representation of nuclear power as a pack of cigarettes is also intriguing. Is the implication simply that nuclear power is dirty and dangerous to your health, or that it is something that effects everyone on a direct and personal level? Or maybe even that nuclear technology will get smaller and smaller, so that like the anarchist slogans about “cops in your head,” we will also all have “reactors in our pockets”? As you can see, the cover of issue 30 is quite grim—a tombstone for the world. The darkness is partially alleviated by the placement of the image as a potential future by the slogan “Read Anarchy or Else…”. The back cover does more, featuring a grinning yellow worm popping out of the grave letting us know “we ain’t finished yet!” Aesthetically there is something interesting about the roughly drawn outline of the tombstone and text placed on the industrial-like background of repeated stock textures, but I’m not sure whether is pulls things together or is simply visually jarring. The back cover loses the patterns and seems more cohesive for it. With this next issue (#30), Anarchy goes in a new direction, forgoing representation for something nearing abstraction, which runs across the spine and onto the back cover. I believe the grainy, ghostly image is actually a highly degraded photo of the Brixton Riots, which would date the issue to 1981. Although at first glance the cover doesn’t appear to communicate much, if you take a moment, it begins to draw you in. What is that? What’s happening? The edge of the newspaper text on the back adds some clues, and if you step back you can just start to make out the front end of a car upside down. And given the proclivities of the editorial collective, I’d wager it’s a cop car. It might be unintentionally so, but it’s a pretty bold cover, both referencing the avant-garde and pushing the limits of legibility and photography. It’s been awhile since I’ve shown one, so below is the table of contents of this issue, to give a sense of the direction of the magazine, as well as a sample page. Well, not any sample page, but a great comic re-interpretation of the classic caped and capped anarchist bomb thrower by Phil Ruff. Issue #31 gives us a return of Clifford Harper, although I suspect his art is being used without his direct involvement. I’m pretty sure I’ve seen this pro-masterbation comic somewhere else, and it’s been re-purposed for the cover. This is most definitely true for the back, where the gender of the baby has been pretty crudely changed and the mother’s words are written in a different hand. Not my favorite Harper piece, but its serviceable for the cover. I do really like the little in joke on the back, the text “Satisfaction Free” directly recalls the words “Job Satisfaction” from the back cover of issue 25, with the firefighters pouring gas on the blaze (see “128: Anarchy (2nd Series), part V”). Not guilty. I had nothing to do with this strip. No idea who did, either. C H.

The artwork on the covers of issue #31 has been taken from a U.S. underground comic entitled “Sex and Affection,” published in 1974. You can see scans of it here: http://www.ep.tc/problems/56/.

Thanks V. and Cliff for the clarification!