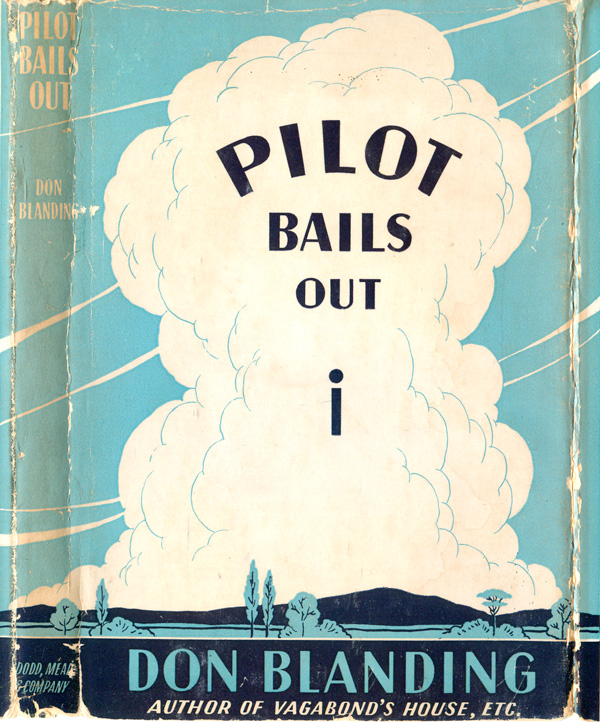 About a month ago my friend Cindy and I went to go see the jaw-dropping remake of Red Dawn (and that’s an entirely different story—wow, what an amazingly delusional Tea Party wet dream) in downtown Brooklyn, and stopped at the Community Bookstore down the street afterwards. For those that haven’t been, this spot is a messy, musty treat. Like a thawing ice cream cone, dripping across your fingers before you can catch it, the walls of Community appear to be constructed out of cascading paperbacks. Spines crush into covers, mass market wedges hold up the lot—a giant game of Jenga, pulling out any one volume might cause the entire building to spill.

Picking through the wreckage, Cindy yanked out a slim hardback entitled Pilot Bails Out. I’m not sure what caught her attention, but the cover immediately grabbed mine. At first it looked like one of the Rockwell Kent wraps for the Boni Paper book series—a similar atmospheric block-print-style drawing executed effectively in a powerful duotone. Complex yet efficient, bold but not intense. It turns out the artist—and author—Don Blanding was a hugely popular poet in the 1930s and 40s, publishing multiple successful books (150,000 copies or more for some of them) on small West Coast publishers before moving to New York heavyweight Dodd, Mead, and Company. Here the title functions as self-referential icon. Pilot Bails Out becomes a parachute, bringing an abstract upside-down exclamation point safely to the ground. The stamp on the cloth under the dust jacket is more direct, a golden chute carries a solitary figure across the vast blue expanse of the cover. With the ground and clouds removed, the pilot looks lost in space, less heroic and more vulnerable. This is about as ambivalent as Blanding gets in this deeply pro-war book. His drawings of the 1942 New York City blackout are really charming. I don’t know what the sky looked like here seventy years ago, but now you really can’t see it. Light pollution makes looking up at night generally feel futile, but Blanding captures a textured sky, something worth gazing at, a quilt of clouds and stars and smoke. The author, whose nickname was the “Vagabond Poet,” is presented as a quintessential US personality: a self-made Okie, military veteran, artist, poet, and bard of the beauty of exotic colonial conquest, Hawaii. He shares some of these qualities with Kent, and with another well-known Left cultural producer peer, Woody Guthrie. But unlike them, Blanding doesn’t appear to have any Left tendencies or sympathies, and makes a much less interesting personality for it. His odes to the US air force hold no ambivalence, and read like a US brand of patriotic Futurism: “For all/Whose hearts/Follow our/Winged youth/In valiant flight” and “Man has found wings. Found them? Hell, he made them!/Out of the way. Winged man is speeding forth.” Aesthetics aside, this is deep Marinetti territory—romantic for speed, power, and violence in the most insipid way. It would be less than two years later when these heroic winged youth would be dropping atomic bombs on Hiroshima and Nagasaki. Regardless of content, it’s hard not to be impressed by Blanding’s drawings of flight. His airplanes look as much like mandalas as machines, spiritual objects at home in the clouds. They don’t so much own the sky as become part of it. These planes are the center of the universe, everything radiates out from them. This was maybe more of a break from the past two months of looking at Anarchy than I intended. Next week we’ll be back on more familiar territory, looking at the books produced by Tricontinental Press in Havana, Cuba in the 1960s and 70s.

I have a hard copy of pilot Bails Out… It is signed by the author.. Don Blanking.. and a liutenant in the Naval Reserve… Henry Taub… What would it be worth if you know… Please let me know… Thank you… Kenneth Dodd

Hi Kenneth, I actually don’t think it’s worth much. I got my copy for $1, and I think it’s pretty easy to find at online bookshops.