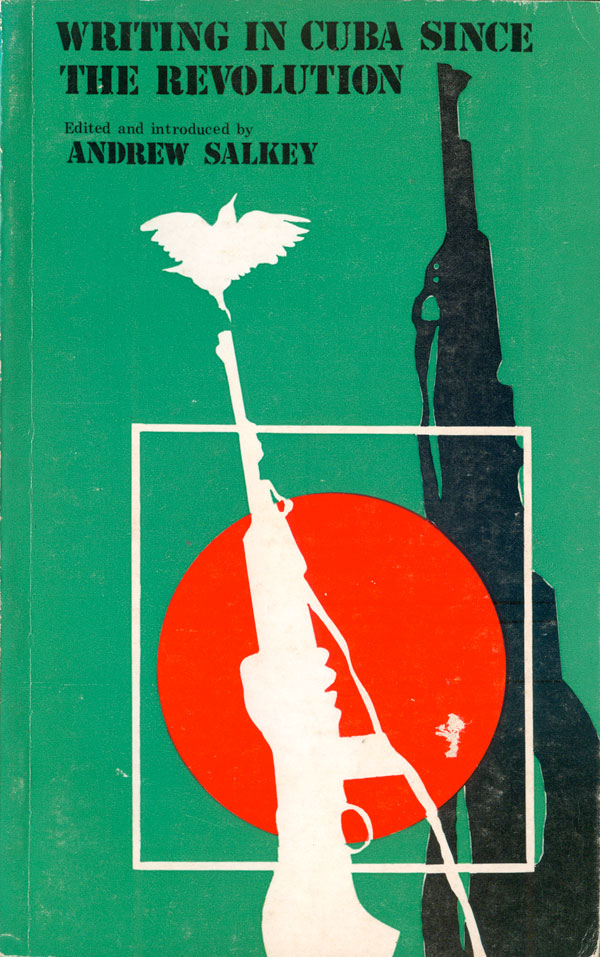 I first encountered Bogle-L’Overture Publications almost twenty years ago. Outside of Boston their is a strange bookstore called the New England Mobile Bookfair. Neither mobile nor a book fair, it is an extremely unique book store, where almost all titles are neither organized by subject nor author, but by publisher. Imagine, a giant warehouse of books where it is almost impossible to find what you are looking for unless you know who published it! They also always carry a large selection of overstock and remaindered books, which is usually where I head first, often finding strange titles by obscure leftist publishers for a dollar or two. So back in 1992 or 93 I was visiting my parents in Massachusetts and got them to take me to New England Mobile, a popular destination when I was back for holidays and such, and I stumbled upon Writing in Cuba Since the Revolution, edited by Andrew Salkey and published by a small political publisher of black and Caribbean literature and politics, Bogle-L’Overture (BLP). I also picked up a copy of Groundings with My Brothers by Walter Rodney, but I’ll talk about that below.

I was immediately drawn to the Salkey book because of the cover. It reminded me of the Cuban political posters I had come across in books, and the covers of Black Power paperbacks circulating in both my political and college circuits. Two rifles are thrust in the air, one black and one white, on a green field. The white gun is thrust into the foreground by a big red circle behind it, generating a bold, almost flag like composition. A white bird emerges from the gun, implying somehow that the rifles are intended for piece, possibly defensive rather than offensive. At the same time effectiveness of the entire cover is based on the appeal of the guns. In addition, the title and editors name are in a simple, military-style stencil lettering, further connecting writing in Cuba to the revolution and the idea of the guerrilla.

Salkey was one of BLP’s most prolific authors, writing or editing at least a half dozen titles with the press. Most of his books have covers much less strident than the one above. But many of them were also designed by Errol Lloyd, who appears to have been BLP’s go-to designer, as he did the covers for nine of the fourteen BLP books I have. Information on Lloyd is surprisingly scatter shot online, given that in addition to being an accomplished designer, he was associated with the Caribbean Artists Movement in London, and an award-winning illustrator of children’s books.

BLP published a number of young adult novels which tried to capture the realities of Caribbean and Indian people living in the slums of London. One of these books, Joey Tyson, has a really strong cover, featuring a painted illustration which captures the complexities and raucousness of political street protests in the 1970s. A large portion of the image is composed of protest signs and placards, their words rendered in a rainbow of colors, folding in on themselves and covering each other, capturing an almost cubist interpretation of what it’s like to be captured in a propulsive crowd.

The rest of cover’s to Salkey’s titles aren’t as strong, but the wrap-around cover for The River that Disappeared is compelling, and both the design and illustration were done by Lloyd. Bogle-L’Overture Publications was founded in 1969 by two radicals, Jessica and Eric Huntley, who were associated with the People’s Progressive Party in Guyana. The press was named after two Caribbean revolutionaries: Paul Bogle was a Jamaican ex-slave who led the Morant Bay rebellion in 1865, and Tousant L’Overture was the leader of the Haitian Revolution. The first book BLP published was Groundings with My Brothers by fellow-Guyanese Walter Rodney. This was also the first BLP book I picked up (along with the above Salkey title already discussed). Groundings is a collection of lectures Rodney gave while teaching in Jamaica in 1968 (for which he was banned from the country!). Unlike a traditional academic, Rodney’s talks are attempts at communicating his ideas about the intersections of Black Power, African History, and revolution to poor and working-class people, particularly Rastafarians. While I had read Carmichael and Hamilton’s seminal Black Power in college, it wasn’t until reading Groundings that I felt like I really began to understand what Black Power actually means, particularly in an international context. I don’t think I can underestimate how important this book is, and it’s unfortunate that it is hard to come by these days unless you frequent Afrocentric book stores—which is itself becoming harder and harder to do as they close one by one.

The initial cover is by Errol Lloyd, is black and white, and features wispy drawings of four diverse black male faces. It’s a but clunky, and I suspect its sparseness is in part due to initial budgetary constraints. The edition I first picked up was the red, green, black, and yellow one on the right, below. It’s the first US edition (co-published by Research Associates School Times) and was designed by T. Pomel. It mixes anonymous black faces with the well-known: Malcolm X, Marcus Garvey, Haile Selassie, Frantz Fanon, and Rodney himself (at this point he was dead, assassinated in 1980). I’m not 100% sure who the figure is supposed to be on the top right. In 1972 BLP published another important Rodney work, How Europe Underdeveloped Africa. It is a materialist analysis of European colonialism, and more importantly neo-colonialism. How Europe Underdeveloped Africa does for the African continent what Eduardo Galeano’s Open Veins of Latin America did for Central and South America. I’ve seen three different BLP editions and covers, the first (below, left) is by far the best design, but I’ve never been able to get my hands on a copy. I apologize for the low quality image, I pulled it from my friend Kazembe’s facebook page. The other two covers are simple and obvious, centered around the shape of Africa. The final cover this week is for an anthology of poems dedicated to Rodney after his death, and published by BPL in 1985. Next week I’ll take you through the rest of the BLP titles I’ve found.