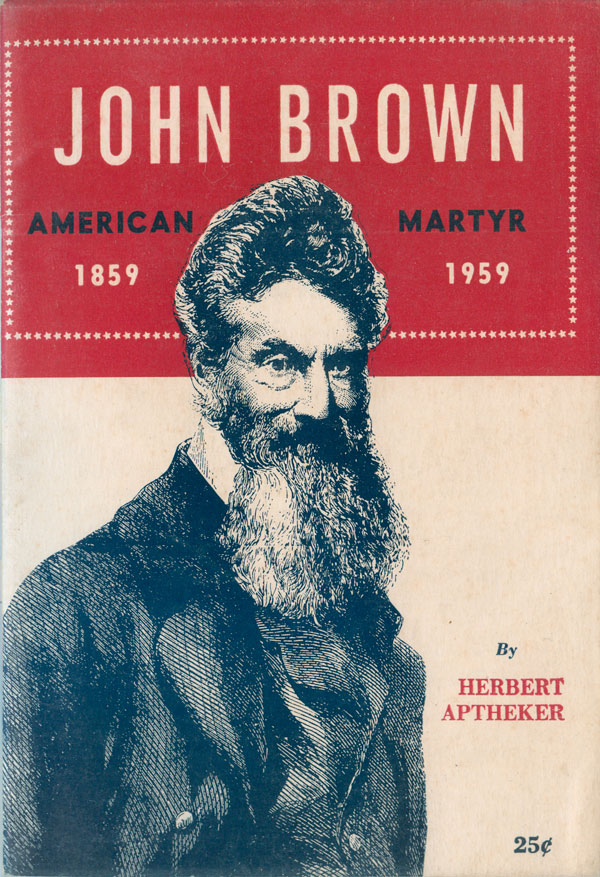 Back in 2011 I published a couple posts looking at the covers of New Century Publishers, a Communist Party-run press that published from the 1940s into the 1960s, and appears to have been the progenitor of the more recent and still existent New World Paperbacks. While much of their output is standard Stalinist muck, there are some gems in the pile (check out my earlier looks at NCP HERE and HERE). The well-known labor historian Herbert Aptheker wrote a number of pamphlets for the press, I’ve found three of them. The nicest cover is on John Brown: American Martyr, a pamphlet published on the hundredth anniversary of John Brown’s death. The unattributed image is taken from the cover of a 1959 edition of Frank Leslie’s Illustrated Newspaper, which in turn was based on an 1859 daguerreotype attributed to Martin M. Lawrence. The designer smartly uses red, white, and blue, as well as a border of small stars, to conjure the American flag, and thus paint Brown as both a patriot and deeply American. This publication is from 1960, showing just how long the Communist Party-USA kept promoting the idea that Communism and the Left were fundamentally centrist and patriotic positions.

And here are the other two. Neither has much flair, but the graphic on Communism: Menace or Promise? is interesting. It first reads as a flame (menace?) but then looking at it as light green, it then starts to look like a plant sprout (promise?). I’m not sure this is what the designer intended, but it actually works. Claude Lightfoot was a life-long member of the Chicago chapter of the Communist Party, running for office multiple times and becoming the public face of campaigns against racism and labor injustice. This pamphlet is a reflection on his 1954 arrest under the Smith Act for merely being a Communist. In 1955 he was convicted, but that conviction was overturned in 1964 by the Supreme Court.

Victor Jeremy Jerome, or V. J., was the editor of the CP-USA’s journal Political Affairs and one of the main people in the Communist Party to comment on cultural affairs. This pamphlet The Negro in Hollywood Films is an early piece, 1950, and interesting for it’s focus on mainstream culture, something the Left has largely ignored in my adult lifetime, outside of the recent explosion of cultural analysis on the internet. The booklet itself is handsome, a nice bluish-green cardstock with the title letterpressed in black and red.