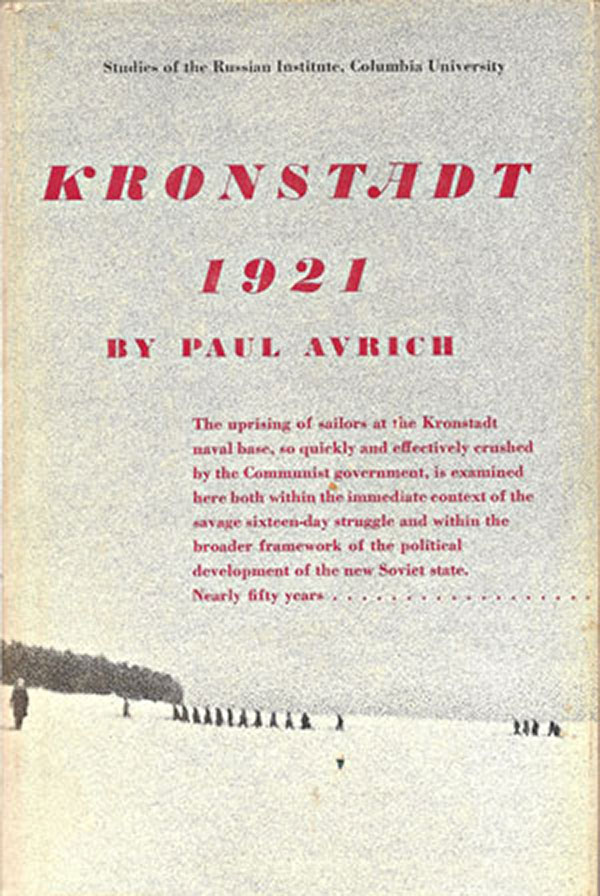 This week I’ve got even more Kronstadt covers, with a lot of help from Dave at Recollection Books in Seattle (thanks!). To the right is the dust jacket of the first edition of Paul Avrich’s Kronstadt 1921 (Princeton University, 1970). Somehow in exploring all the covers of this books two weeks ago (HERE), I missed the first edition! This design takes the path less traveled for the more “pro-Kronstadt” books, choosing to focus on the large white expanse of snow and ice of the location, rather than the heroics of the soldiers. The slightly Cyrillized (doubt that’s a word?) poster type is a nice touch, as is the line of ellipses that become a break in the image midway down the cover.

Below are a couple more anarchist accounts of the event. They both clip out and re-purpose the poster image of the Kronstadt soldier. The first is a German account by the Russian anarchist Voline (best known for his book The Unknown Revolution). Der Aufstand von Kronstadt (The Kronstadt Rebellion, Unrast Verlag, 1999) uses the image almost as clip art, placed as an icon in the bottom right corner, superimposed on a map of Kronstadt and Petrograd. Lynne Thorndycraft’s The Krondstadt Uprising of 1921 (Left Bank Books, 1975) places the image front and center, and simply removes the text and background. It is very similar in style to the 1991 Avrich cover (HERE), but much cleaner and more effective. Emma Goldman and Alexander Berkman both traveled to the Soviet Union once they were booted from the United States, and both were quickly disillusioned by the authoritarianism they found there. Kronstadt was the final break. Berkman wrote more about it, including his work The Russian Tragedy (Cienfuegos Press). As I said way back in my 8th book cover blog post, the cover designed by Flavio Costantini is stunning—the corpse of a Kronstadt soldier says it all. Next to it is a book I’ve never seen other than online, so I’m not sure what it is and I don’t believe it is available in English. My guess is La rébellion de Kronstadt 1921 (Editions La Digitale) is a collection of bits and pieces of writing by Berkman and Goldman on the uprising. The cover is very simple and a bit lazy, but works. the basic wood-type style effectively communicates the time period and evoke a big newspaper headline. Rounding out the series, here’s a dull academic cover for Israel Getzler’s Kronstadt 1917–1921: The fate of a Soviet democracy (Cambridge University Press, 2002). As far as I understand, the cover should not be used to judge the book, because I’ve got a couple glowing accounts, but have yet to read it myself—unfortunately it is usually quite expensive. Next to that, a much, much better image of Emanuel Pollack’s The Kronstadt Rebellion from the first installment (thanks again Dave!). And to finish off this weeks post, the front and back cover of the British magazine Anarchy (second series), issue #2, which is largely focused on Kronstadt. Keep an eye out for a future post which will focus on the covers of Anarchy. Next week will be the final Kronstadt post, and features a montage/poem/artist project I found in an old Danish political journal. Stay tuned!