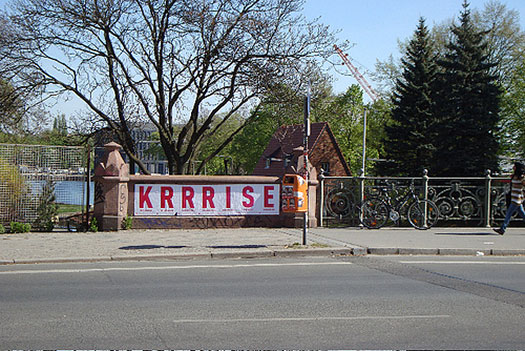 Our friend Sandy K. from Image-Shift sent us a communique of links and images to their recent poster project for Mayday Berlin. The project consisted of two sets of posters. The first set consisted of 6 posters, each one with a single large pink letter on white background, the letters: K, R, I, S, E, !, spell out CRISIS! in German. Each letter also has another word it stands for, K for Kapitalismus, S for Solidarität, etc. I’ve roughly translated the text from each poster below (with online translators, so sorry it is a little rugged!). The second set are all white text on blue background, and are specific information about the Mayday events in Berlin.
There are more photos of the posters pasted up around Berlin here and here. CAPITALISM
All the talk of crisis. We talk about capitalism as a permanent crisis! Built on war, colonialism, exploitation of the global south and the labor of many, capitalism as we know it today has again modernized. With all the friendly democratic participatory opportunities, the blacksmith believed to be only happy that it was his own happiness. Idiocy! So much work, stress, money, competition and the fear of “where do we go tomorrow?” An essential part of our daily market economy. A few benefit, while the many endure the stress. This system of competition, the infinite growth, exploitation and isolation which we reject. This system we fight, we fight for our rights, wealth for all and a caring society! RESCUE PACKAGE
Have recently talked politics and the economy of which the “we all need to save so we can see that today tens of billions will continue running from bottom to top and will be redistributed to the private sector. Hello? Enough yet? Those who pay should be those who have caused the shit. We demand a big rescue package for those who do not have a Penthouse! In the meantime, the first to go is the existence of money, education for all, health care and local and long distance for free, cheap rents and a right of migration. Our rescue package means of socialization and privatization of profit losses. So capitalism is scrapped – it is consistent to the premium! INTERNATIONAL
The world has become smaller. Globalization, it is called love. We find good globalization – the globalization of the capitalist world market competition and its long history. Since colonialism spurred capitalism in Europe – and longer – we see nations in the struggle for the wealth of this planet, we see exploitation and wars. This is also after the current crisis will not change. We call repair payments for the eradication of colonialism and a right to freedom of migration. Our solidarity has no location and no competition thinking in national boundaries. And how is it still so beautiful pathetic: High international solidarity SOLIDARITY
Solidarity? Also so’n abgeschmackter term. Why is it so difficult for others in their concerns, in their struggle to support? Why is it so easy to think all this has nothing to do with me? We think that capitalism is a culture of competition, isolation, fear and Egomanie and that we all are part of this shit. We have not chosen. However, we know that it is important to us to support each other. It starts with the neighbors, it is about solidarity with the strikers towards international solidarity. Solidarity is not without criticism and is always at eye level. It grows from the understanding that the concerns of others with oneself to do. We want a caring society – and begins with each one of us. That has nothing to do with morality or guilt, but simply with the understanding that man is a social being is that your happiness depends on the others. So easy can that be! EMANCIPATION
It is about freedom and unfreedom. It starts with ourselves. The freedom to run our lives ourselves, to create, modify, design is the core of any emancipation. And if only the emancipation from the constraints of the bourgeois nuclear family or the emancipation of ascribed gender roles and violence, which it represents for many a day. We are part of the societal norms and play the game of etiquette rules ourselves only too often. We want other forms of self-determined politics that differ from traditional hierarchical party politics. Emancipation: that is not without criticism of the conditions that will take us to the what we are today. Emancipation is not an ego trip. Emancipation requires the courage to criticize and self-criticize, and create solidarity with others and their struggles for self-determination. Let’s go – and no fear of the chills of freedom. You’re not alone! WHAT NEXT!?
Well – after 1 May comes 2 May. Hello life. And then yes, the crisis, with its lies and Konjukturpaketen etc. – as always – Mayday our experiment is a building block in our struggle to find another path to a different policy and a caring culture. With all our determination stumble forward! Eating against our daily lives, together lets fight for a caring society. We do this not just since yesterday – fun times with dancing and wringing tough times. Where practical solidarity can be fun when the power is precarious, where we resist and where we desire to get collectives – there we are! And now we look forward to the day when we can say: It was not all bad in capitalism!
Subjects
Anti-capitalismCulture & MediaSocial Movements

german anticapitalist posters are so rad! i miss all the brilliant mayday posters from the two times i experienced it in berlin…thanks for the reminder! (and the brutal translating!)

Mayday Berlin is part of EuroMayday Network
the international poster rocks too!! take a look
http://euromayday.org/

more on mayday posters – and a better translation:
http://backspace.com/notes/2010/05/may-day-posters.php