Friends in Pittsburgh recently sent along an article from the Pittsburgh City Paper about Shepard Fairey sending a cease and desist letter and threatening to sue a local designer. Once again Fairey gives us a road map of capitalism in motion. His commodification of ideas and knowledge leads directly to an intense need to protect the alleged ownership of that knowledge. From Disney to Hollywood to Fairey, the entertainment industry in this country is built on the seizing of ideas, images and technology for one’s own, using this material to accumulate wealth, and then using the weight of the state (the legal system) to bludgen anyone smaller than you that attempts the same process.

March 5, 2009
Steelerbaby Blues
BY CHRIS YOUNG
Shepard Fairey is the creator of the iconic Obama “Hope” poster. He’s been admired by critics and guerilla artists, and just weeks ago he was the subject of a profile on CBS Sunday Morning. But Pittsburgh graphic designer Larkin Werner has a different perspective. To him, Fairey is the guy who is “picking on a baby.”
The baby in question is Steelerbaby, a blue-eyed kewpie doll clad in a knit black-and-gold uniform. Steelerbaby became an online hit — he boasts more than 2,000 friends on Facebook — after Werner created a Web site for the doll during the NFL playoffs in 2005. The following year, he started designing and selling Steelerbaby merchandise at the online store cafepress.com to satisfy demand for the doll Werner describes as “slightly creepy.”
But early last month, Werner learned that Fairey’s company, Obey Giant Art Inc., sent cafepress.com a cease-and-desist letter, informing the online store that Steelerbaby’s merchandise marked with the word “Obey” was infringing on the artist’s trademark.
The notice came as a surprise to Werner. For one thing, he says, Steelerbaby’s line didn’t pose much of a threat to Fairey. According to cafepress.com, Werner had made less than $70 in the previous three months for the sale of 16 items, 10 of which had “Obey” written on them.
But Werner says he’s less concerned with the legal issue presented by the cease-and-desist letter — he has no plans to fight Obey Giant Art about the trademark — than he is with its hypocritical nature. Fairey, he argues, has bolstered his own career by appropriating images and infringing on the trademarks of others.

read the rest of the article here.

wow- the ultimate absurd extension of this debate! made even more absurd by the fact that the whole “OBEY” idea is directly lifted from the 1988 movie THEY LIVE- next up: Shep Fairey vs. Rowdy Roddy Piper?

Erik-
Not to mention that Shepard Fairey appropriated imagery and persona of Andre the Giant. Pretty ironic. I can already see the best line in your They Live sequel, “I came here to chew bubblegum and sell out… and I’m all out of bubblegum.” hah.

this news is not surprising… just more of a bummer. and a nice piece of evidence to have when I get into conversations with people about how Fairey’s work is falsely touted as radical, independent, and anti-corporate, or when his appropriation is brought up as examples of “fair use”…
Erik, due to my (growing-up-with-no-tv) ignorance of wide swathes of american pop culture, I had had no idea that the “Obey” line itself was lifted from They Live! (never seen it… but now I need to.) that makes it even more ironic that he is cease-&-desisting the steelerbaby guy. Crazy.

The spiral of legalese and contradiction continue.

All of Us or None at the Oakland Museum

For forty years Berkeley activist Michael Rossman collected political posters, amassing likely the largest personal collection in the US. Michael was an amazing and generous guy, almost every trip I… 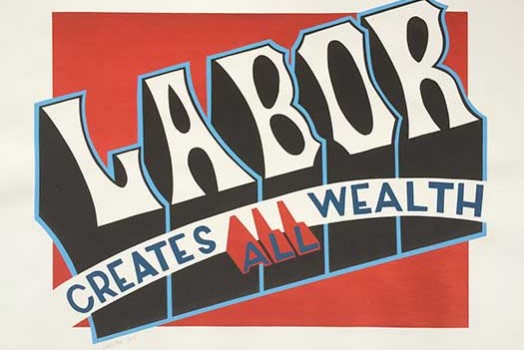 Can Labor Get Out of This Mess?

I just got this in the inbox from author & photographer David Bacon. A really interesting piece on the future of the labor movement in the US. It was originally…