The new issue of Left Turn is hot off the presses, with a beautiful cover by one of our favorite artists, Cristy Road. Left Turn is probably the best radical magazine currently being published in the US. The magazine always looks good, and the content informative and well-written. Unlike most radical publications, they manage to have strong political positions without being dogmatic or sectarian. Their writers aren’t cranks or armchair critics — they’re usually young activists and new voices.
This issue features a special section called “The Revolution Will Not Be Funded” which turns a critical eye on the role that large philanthropic foundations play in funding non-profit organizations. The section was inspired by a 2004 conference of the same name that was set up after INCITE! Women of Color Against Violence lost a $100,000 grant from the Ford Foundation because of their stance on Palestine. From co-editor Max Uhlenbeck:

What has been the cost of the proliferation of this Non-profit Industrial Complex? Why have we seen this shift from volunteer-based activism to staff-driven advocacy work? How has the field of social change become so professionalized that one needs multiple college degrees just to qualify for a job?

These are important questions for people concerned with building organizations and making activism their work. And although thousands of activist grumble about them, almost no one is facing these questions head-on. When non-profit groups and alternative media projects rely on funding to pay the bills they suddenly have two constituencies to please: their actual audience, and foundation officers. The availability of Ford and Rockefeller money has allowed many organizations to avoid confronting hard questions about their own sustainability. And the professionalization of non-profit work has led to an industry where only college graduates who will work for miniscule salaries can afford the luxury of activism.
But Left Turn doesn’t fall into that trap: it’s volunteer-run and funded completely by sales and small donations. So check out the new issue, get a subscription, and drop a few extra bucks in their jar if you can. And while you’re feeling generous, support Cristy Road too!
Related: VisualResistance.org’s interview with Cristy Road.

well, sounds very nice the way you describe it, but “volunteer-run and funded completely by sales” is still self exploitation and desperate adherence to market forces. i’ve done both and was frustrated afterwards. if you do volunteer media work for an activist public, they are so demanding even though they don’t pay you that your frustration doubles. when you charge people for your media, a magazine for instance you are trapped in capitalism completely because you try to make money off something thats not profitable without being corrupted. either way you end up overworked, frusttrated and disillusioned.
only if everybody (every group) does her/his own magazine or media work without spending too much time on it, it can somehow work. like i do with my weblog. so the only thing you can do is to teach people how to do it by themselves.

I think the problem is that your (or most peoples) weblogs are seen by only a handfull of people. Well distributed print media can still reach many more people, specifically those who dont spend all their time on computers or even have the internet. To say that to be driven by sales is still self-exploitation and desperate adherence to market forces seems a little ‘activist-jargon heavy’. Im sure the magazine does not depend on sales at Tower records or Borders Books to make its money, its based on support from the broader activist community who in various ways support the project. Also Left Turn (unlike almost every other magazine) seems to not depend on advertising at all (not even from ‘progressive’ groups which is impressive in this day and age. Lets find ways to all support this and other radical media institutions!

I was curious what form of “work” in a capitalist society isn’t exploitation, self- or not. I’d much rather work for myself or in a co-operative
setting, than in most “straight profit-driven” businesses.
The reality, to me, is that everyone’s got a hustle, if not they’ve got a trust fund.
More importantly
It sounds to me that sum1 has personally had negative experiences and I am more interested in hearing about their
frustrations, difficulties, problem, etc with co-operative, volunteer run ventures so we can avoid them, or at least be prepared for them
in the future.

sum1 & k.see’s points bring to mind john emerson’s article on artists’ cooperatives which i wrote about here.
print publications are incredibly hard to run. i ran one for two years and during production cycles it was anywhere from 20-50 hours of work per week. then in between production cycles you have to fundraise, network, recruit writers and photographers, etc.
blogs are a lot, lot easier to run but building up actual readership is hard, and the quality of the readership is totally different. there’s something about having a physical, printed publication that just makes the words and messages more real, more tangible.

Also, the point about non-staffed and non-funded isn’t really about it being non-exploitative. Most things under capitalism involve exploitation. The point is retaining political independence both from advertisers and from liberal foundations. Easier said than done, so props to LT!
KG
Left Turn just sent out a fundraising appeal, so now’s a good time to give!

Thai artist Vasan Sitthiket is showing a series of new paintings about the Iraq War 5 years on at the National Art Museum in Jakarta, Indonesia. The show opens March…

So, my band Whore Paint went on tour this winter on the west coast with our amazing friends Trophy Wife and we’ve got a snazzy video folks at KDVS college…

A group calling itself the Milwaukee Paper Company has hit the streets of Milwaukee with their new poster campaign. Here are a few images, to see more photos visit milpaperco’s… 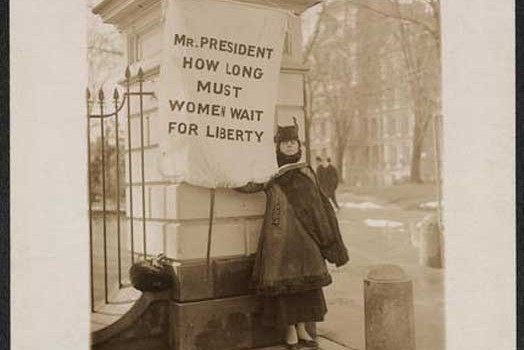 Here is an excerpt from my book A People’s Art History of the United States. This excerpt details the woman’s suffrage movement in the late 1910s and their use of… 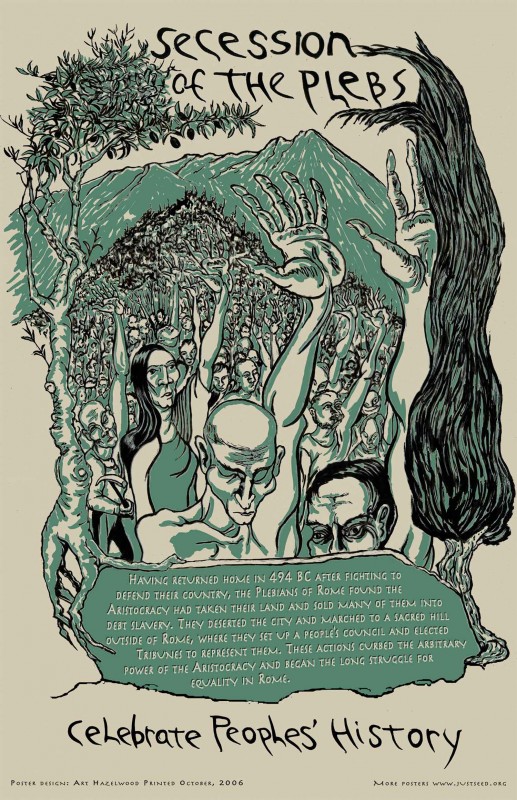 Secession of the Plebs 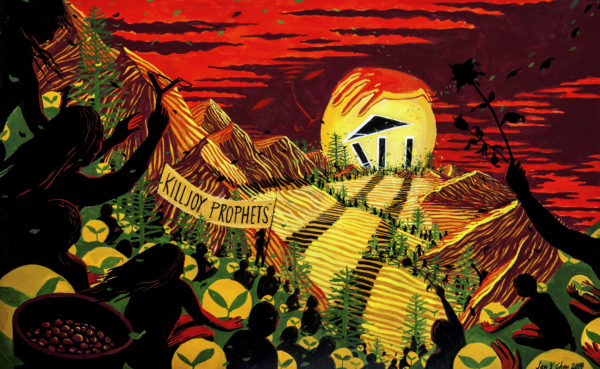 Digital Print
Out of Stock