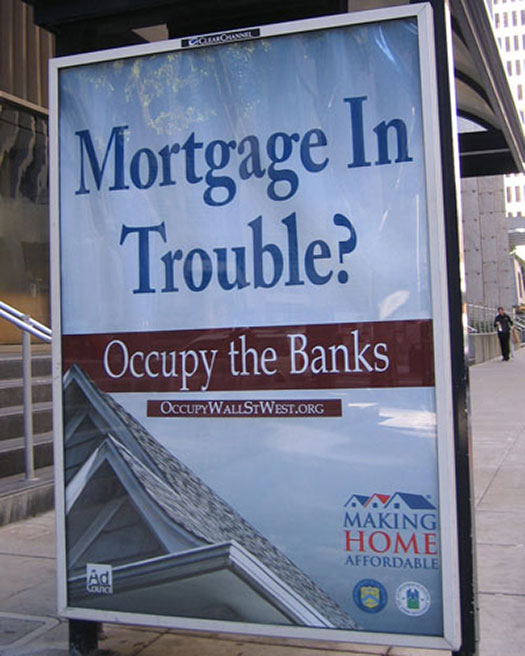 Our friends at the California Department of Corrections have been hard at work, and this week released a new series of modified bus shelter advertisements supporting Occupy Wall Street West. From their press release:

The California Department of Corrections (CDC) has unveiled a new campaign of bus shelter ads to confront America’s home foreclosure crisis. During the week of January 16th, the CDC successfully apprehended, rehabilitated and discharged more than one dozen bus shelter advertisements throughout San Francisco, including the intersection of California and Davis Street, one block from the Federal Reserve Bank of San Francisco. The CDC’s red, white and blue advertisements declare: MORTGAGE IN TROUBLE? OCCUPY THE BANKS along with the website, www.OccupyWallStWest.org. Produced with the assistance of the U.S. Department of the Treasury and the U.S. Department of Housing and Urban Development, the corrected advertisements feature the rooftop of an American home set against clear blue skies with the phrase: Making Home Affordable.

The corrected ads were released shortly prior to January 20th in anticipation of a day-long, nonviolent shut down of San Francisco’s Financial District by Occupy SF. January 20th also marks the one year anniversary of the controversial Citizens United decision by the U.S. Supreme Court, which granted First Amendment protection to corporate political expenditures. Occupy protestors are demanding a halt to predatory foreclosures and evictions by banks and the end of corporate personhood. They will be taking their demands directly to the offices of banks and corporations in San Francisco to stop business as usual on January 20th.
The rehabilitated advertisements are currently at liberty and seem to have successfully readjusted to public life. However, these ads will remain under surveillance by department staff to prevent recidivism and any potential lapse into prior criminal behavior.

For more information on the operations and programs of the CDC, contact the California Department of Corrections Office of Communications at cdc [at] revolutionist.com.

One comment on “New Work by CDC Billboard Correctors”

I’m here to humbly state that “California Department of Corrections” as you are using it is brilliant. I had to re-read the paragraph to figure it out, and that kind of cognitive dissonance for someone like me is quite memorable. Excellent! OccupySF lives on!!