As the city of Oakland waits with anxiety about the decision the jury will come to and the final outcome of the Johannes Mehserle trail verdict artists are busy at work paying tribute honoring Oscar’s memory.

My friend Paul Barron has created an amazing installation of his posters of Oscar Grant using blow ups of the details and figures in his prints. I am a huge fan of his work and recommend checking out his website: http://mediadissent.com
Paul Barron is an Artist and an Activist. Those two things often overlap.
To sustain his projects he does freelance Web and Graphic Design. Barron did a video installation at the Whitney Museum of American Art in New York with Roberto Miguel in July of 2009.
Barron does a lot of Anti-Authoritarian themed print making, most often Woodcuts and Serigraphs. He also does custom screen printing if you need work done. He has a six color t-shirt press and is set up to print with Plastisols.
Barron loves doing mural work when he gets a little creative freedom. The largest one he has done was 60 feet by 15 feet. Barron is always looking for walls and paint if you would like to commission him.
He is also a photographer. Barron has documented a lot of street art on his travels around the world. His photos are often featured on www.EndlessCanvas.com and has been published in the East Bay Express Newspaper. His art has been published in the SF Chronicle, the Piedmont Post and the SF Gate Website. As well as the Paper Politics book put out by PM Press and a book about Urban Music in Paris France.
Subjects

I love Paul’s work! This looks great. Where’s this building? Is it a board-up he just covered, or a permission piece?

Most of Downtown Oakland will be boarded up. The City of Oakland sent a memo out to merchants warning them of a repeat of what happened in early ’09. I love Paul’s work too. Once we are ready to bring new artists into JS we should definitively ask Paul. So most merchants are worried about their businesses. I am pretty sure this one was done with permission. As are others. I will be posting up more as I get the ok from the artists.

Nice! Thanks for posting Melanie!

Rise Up: The Political Graphics of Dignidad Rebelde

Please come Jesus Barraza and Melanie Cervantes of Dignidad Rebelde at our opening at Artillery Gallery in San Francisco on December 4th at 7:30pm. You can support local artists and… 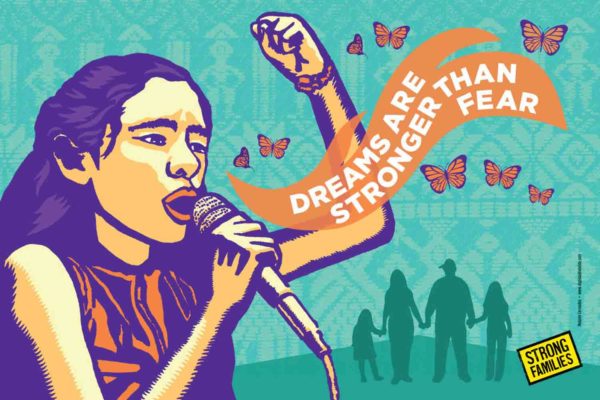 Dreams Are Stronger Than Fear