I went to Peter Kuper’s presentation of his recently published book Diario De Oaxaca: A Sketchbook Journal of Two Years in Mexico on PM Press. The event was an opening for Peter’s current exhibit up at the MoCCA Museum of Comic and Cartoon Art, at 594 Broadway, Suite 401

“MoCCA is pleased to present Peter Kuper’s Diario de Oaxaca: A Sketchbook Journal of Two Years in Mexico. This exhibition is in conjunction with the release of his book published in a bilingual edition from PM Press in the US and Sexto Piso in Mexico. Diario de Oaxaca is Kuper’s chronicle of his experiences in Oaxaca, Mexico during the political uprising of 2006 and its aftermath. The exhibition includes sketches, illustrations and comics, capturing both the light and shadows that defined his time there.”

The exhibit is really simple and stark. I started to notice how Peter was using the nationalistic colors of Mexico in the wall text. It then occurred to me that the wall to my right was painted red, to my left, green, and the wall in front of me had an eagle eating the serpent on the cactus. He incorporated simple elements like the Mexican flag along with stenciled slogans from the streets of Oaxaca on the walls amidst his journal sketches. There are two large screens in the gallery one, a multimedia collage of Peter’s stenciled “Day of the Dead” self-portrait, and another displaying dozens of slides he took while living in Oaxaca. The images range from the immense amount of graffiti and visual culture produced in the streets as part of the uprising to buses, which were commandeered and burnt to provide barricades in street battles against the Federal Police, to snapshots of his daughter in front of a line of riot police. Having been a friend of Brad Will, a visitor to Oaxaca, and a supporter of Mexican social movements and art collectives I found myself feeling quite sensitive to the material and had to step out of the exhibit for a moment. I remember hearing of Peter’s “reporting” from Oaxaca, and was subsequently excited to see the issue of World War 3 Illustrated of his journal entries from this period.
I appreciate Peters work a lot and this exhibit based on this beautifully produced book is well worth seeing, and purchasing. The MoCCA site does not say how long it will be on view, so check it out now. Peter will be doing various book releases around the continent for the next few months, stay aware by looking at PM Press
Subjects 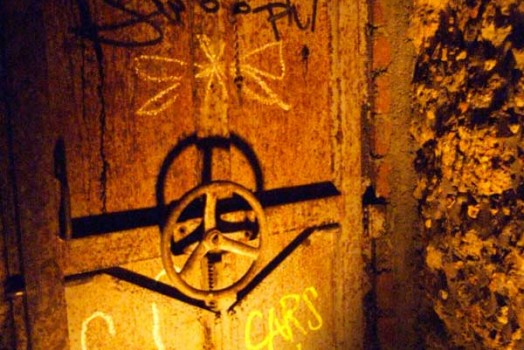 read the writing on the wall-11

Jeff Koons Must Die!!! The Video Game from Hunter Jonakin on Vimeo. “Jeff Koons is one of the most polarizing and well known contemporary artists living today. He attempts to…

beat to the chase

I was just thinking the other day of interviewing my buddy Chris, for this here blog. And as I was looking over the Gothamist site, for updates on the cyclist…

I Can’t Wait for the True Reckoning

If you care to reflect on the crisis there are a bunch of NY TImes articles gathered in this link of their Business Section. Its called the “Reckoning”, or “the…