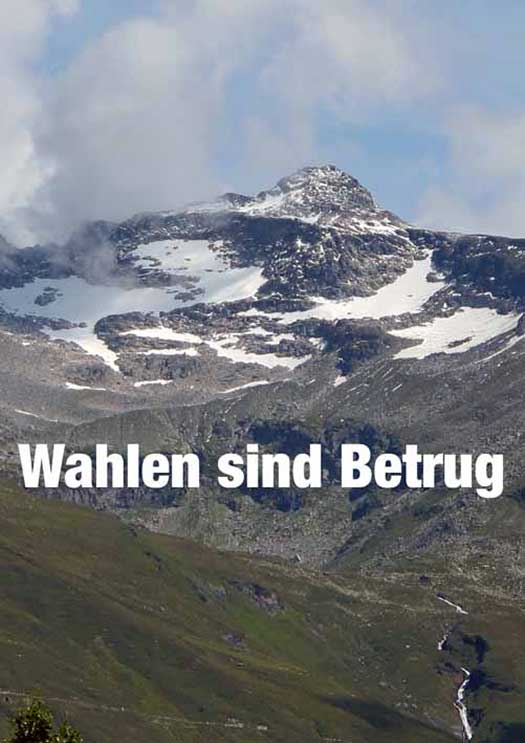 I just got this email from artist Oliver Ressler:

“Elections are a Con” – Censorship by the provincial government of Tyrol
On November 21, 2011, I received a funding commitment from TKI – Tiroler Kulturinitiativen / IG Kultur Tirol. This resulted from an exemplary transparent juried process that selected, from 56 proposals, seven projects for funding, including my poster project “Wahlen sind Betrug” (“Elections are a Con”). The posters with the terse slogan “Elections are a con” were to be displayed over a period of two weeks in Innsbruck (Austria) as a series of city-light posters or on large billboards.

The slogan “Elections are a Con” (Elections piège à cons) was coined in May 1968 in Paris. The German version of this slogan, shaped by a specific historical setting, would be placed over a photograph that shows the Tyrolean Alps. Comparable images appear repeatedly in the background of posters from political parties competing in Austrian elections. The poster series “Elections are a Con” would lack the usual portraits of politicians and constitute a provocative blank space. Instead of meaningless election advertising, one could read the matter-of-fact statement that “elections are a con”

Surprisingly, I was notified on December 21, 2011 by an email from the Cultural Department of the Tyrolean provincial government that “after another thorough examination of the submitted documents and in consultation with a member of the provincial government of Tyrol, Dr. Palfrader, my project would not be supported.” Despite repeated requests, there has been no explanation for this unusual decision to override a work, which was selected by a jury in a lengthy process. The only “response” was a short e-mail on December 23, 2011 by Mag. Nagiller Wöll of the cultural department of the government of Tyrol, in which she stated that she had explained the reasons for rejecting it in a conversation with a representative of TKI (Dr. Anita Moser).

In that conversation, Mag. Nagiller Wöll explained that the Tyrolean provincial government could not support my work, because the text on the poster would be wrong. Elections would not be a con, but election advertising.

The Tyrolean government claims for itself the right to judge something decided by a jury meeting openly in front of an audience, without apparently being able to understand the contents of a clear project description.

The project description had the following explanation:
“Walden Bello was arguing that Western democracy is an ideal situation for insuring the continued power of elites; because it allows elites to contest with each other, while at the same time shutting out the dispossessed, the impoverished and workers, while paradoxically offering them the illusion of having a participation in building their own future and having a participation in the political process.* Elections have mutated so that today’s system of representative democracy has become an increasingly meaningless ritual, while self-appointed elites in international trade organizations, the World Bank and transnational bodies such as the EU increasingly make the real decisions away from public discussions.”

The five-member expert jury of the TKI based its decision to support, “Elections are a Con”, with the following arguments:
• The project concept is coherent and artistically convincing, and the planned implementation of the imagery is very well chosen.
• Through “simple” means, discussions can be incited and widespread attention can be stimulated.
• At the present time (and also considering Innsbruck’s municipal elections to take place next year), such an artistic statement is very important.
There has not yet been an official explanation of the Tyrolean provincial government’s decision to override the jury’s clearly written decision.
This is not an isolated case. The same jury hearing of the expert panel of the TKI also selected the project “Alpine Studies” by ritesinstitute. The artistic research project on how the Tyrolean province dealt with its Nazi past was shown no mercy under the strict eyes of the Tyrolean provincial government and was rejected on the same terms as my project. Thus, the Tyrolean provincial government acts against the constitutionally guaranteed freedom of art and tries to determine what artists have to say publicly and what not. The prevention of unwelcome political work has a name: censorship.

It is to be hoped for the Tyroleans that their reactionary politicians, along with the supposedly representative system in which elections only serve the function of “legitimacy by procedure” (Niklas Luhmann), will be sent as soon as possible into the desert of meaninglessness.

Oliver Ressler, artist and filmmaker, lives in Vienna. www.ressler.at
A printable version of the poster “Elections are a Con” is eagerly provided upon request (email to oliver [at] ressler.at).