Our friend Christopher Cardinale passed along this preview of his art from his first full length book graphic novel, Mr. Mendoza’s Paintbrush, which will be published by Cinco Puntos Press. It is featured in this month’s issue of The Comics Journal #295. The novel is an adaptation of a short story of by the widely acclaimed author Luis Urrea. It is scheduled to come out this Spring. Every time I see him he tells me he’s hard at work to finish it. I can’t wait. You can see more of Christopher’s work in World War 3 Illustrated and the mural Not One More Death which some of us collaborated on, with him.
From Cinco Puntos Press:

Be careful growing up in the green, wet, mango-sweet Mexican village of Rosario, where dead corpses rise up out of the cathedral walls during July when it always floods; where vast silver mines beneath the town occasionally collapse causing a whole section of the village to drop out of sight; where a man with a paintbrush, to wit Mr. Mendoza, is the town’s self-appointed conscience.
Magic realism, you say to yourself. Luis Urrea affirms to the contrary, “Not magical realism. It’s how kids grow up in Mexico. Especially if you’re a boy.” And the part about Mr. Mendoza is really really true: he brandishes his magical paintbrush everywhere, providing commentary to singe the hearts and souls of boys who are looking to get into trouble. If he catches you peeping at the girls bathing in the river, he’ll steal your pants and paint PERVERT on your naked buttocks. And one day, he performs a painterly act which no one in Rosario ever forgets!
Luis Alberto Urrea is the author of the widely acclaimed novel The Hummingbird’s Daughter and a 2005 Pulitzer Prize finalist for nonfiction for The Devil’s Highway. Inducted into the Latino Literature Hall of Fame, Luis was born in Tijuana, Mexico to a Mexican father and an American mother. This is his first graphic novel and a riveting book, like Vatos, which young adults will love. Check out Luis’ commentary on the upcoming Mr. Mendoza’s Paintbrush graphic novel.
Christopher Cardinale is a muralist and artist with a social message. His large-scale murals against globalization and war can be seen in New York, Italy, Greece and Mexico. He lives in Brooklyn. He is a regular contributor to the zine World War Three. Check out our blog for an article about Christopher’s trip down to the city of Rosario, Sinaloa in Mexico. This is the town where Mr. Mendoza’s Paintbrush takes place.

Can’t wait to get a copy. Christopher’s work rocks and he’s the perfect person to do this story.

The weather is feeling mighty nice these days, and it’s the perfect time to start gardening if you haven’t already. In honor of springtime, I want to share an abridged… 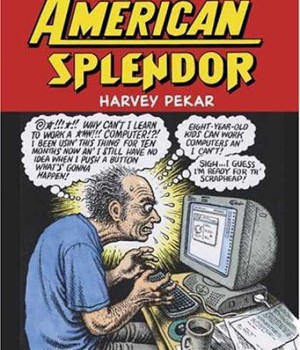 Pour one out for Harvey Pekar and Tuli Kupferberg. Pekar was known for his comic American Splendor, which he wrote and enlisted artists to illustrate including R. Crumb. He also… 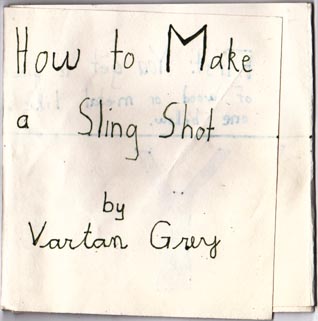 How to Make a Slingshot

A few years ago I found this guide on how to make a slingshot on the sidewalk. From the looks of it, it was drawn by a kid. I really…