Hi friends of Justseeds, we are super excited to get our new project here at Justseeds rolling: the Print of the Month Club. You can purchase a membership until January 25th, and get 12 months of radical art delivered straight to your door.
To see some preview shots of the 1st print of the month completed by Pete Railand and a walk through process of making it, follow through here…

For the first print of the month print I decided to take some of the drawings I’ve been working on, which are extensive scenes of clouds and smoke, and turn one into a multi color screen print. I was hoping to capture some of the subtle tones of the drawings and to see how they translate to half-tone and screen. As of late I’ve been using the smoke/clouds as a departure point when thinking about destruction, and change. These are pretty open to interpretation, which I like, but I would say for me the recent events around police violence in Ferguson, New York, here in Milwaukee, and systemically across the US have been manifesting for me visually in this way. Tied into that is the climate crisis we are in, which is bringing crazier weather, and will provide us with incredible challenges, a result of the careless violence we as humans have been subjecting this planet to for so long. Some how this is all coming out in these forms, for me… and always inspired by the power of music I pulled the words from the great Sam Cooke’s anthem for the American Civil Rights Movement.
I started this out by using ink and a brush to get washes for the clouds/smoke, then over-layed another sheet of paper and used an ink pen to do the line work in the clouds/smoke. I also did the banner in pen on a separate sheet of paper. I then took the three sheets and scanned them, opened them in photoshop and worked on aligning them. The ink washes needed to be half-toned so I tried out a bunch of variations of that until I liked how it came out. I printed these all out and burned screens.
Pink halftone printed first Then I took screen filler and randomly painted in some sections of the screen to block out parts of the half tone. I next used that same screen to print a light blue with a lot of transparency (though it could have used more) in an effort to have the pink and blue blend where they overlap. I registered it to print directly on top of the pink. This would be called a reduction process I suppose. After the halftone dried I printed the line work of the clouds. At this point I realized I wanted some tone to be in the banner so it stood out from the white of the paper, so I quickly cut a rubylith stencil and burnt a screen for a light silver/blue. Then came the black for the banner, and trimming down. Here’s the print the subscribers for Print of the Month club will get at the end of January. Hope you all enjoy it
thanks for supporting Justseeds
if you are interested in keeping up on my work and process shots like this follow Justseeds’ instagram or me (Pete Railand) at: lookbacktosee
-Pete
Subjects 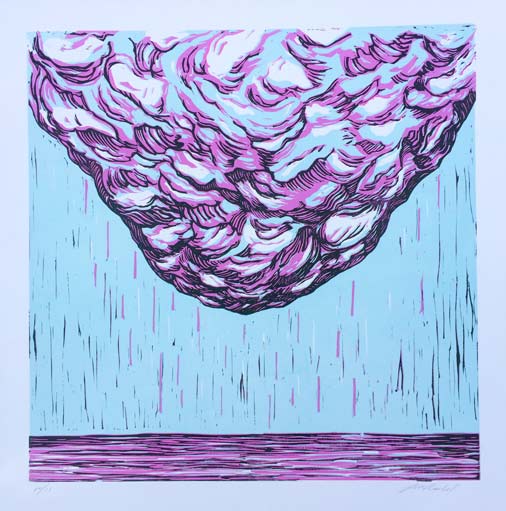 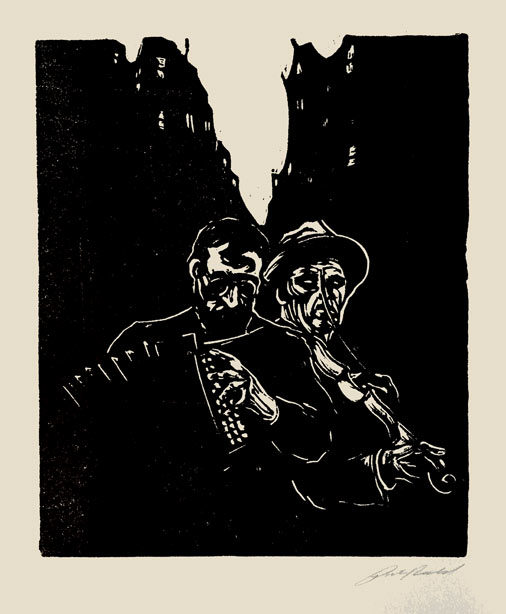