I received this writing from a friend who is a UE staff member. The United Electrical, Radio and Machine Workers of America is a national union representing some 35,000 workers in a wide variety of manufacturing, public sector and private non-profit sector jobs. UE is an independent union that is not affiliated with the AFL-CIO.
My reason for posting this text are two fold: The Justseeds blog always supports critical writing and critical points of views. Second, this is one of the few writings that I have read that is critical of some of the recent tactics and decisions by the higher-up within the three major unions involved in the struggle in Wisconsin.
The text argues that the movement in Wisconsin should be led by rank and file members and workers should not concede paying more for pension and heath care benefits at the expense of Walker’s cut-throat policies. The text also urges the strong alliances between EVERYONE in Wisconsin and argues that union members, non-union workers, migrant workers, and the unemployed should come together to form a mass movement.
The author requested that he/she should remain anonymous and we honored that request. We also want to strongly state that those of us in Justseeds in Wisconsin have been working tirelessly to support unions, lend graphics for free to unions, and encourage more people to join unions. We want to see unions become even more powerful and critical writing and debates over tactics and leadership within unions will help this cause.
Realpolitik in the Wood Violet State
by Lucy Parsons, UE staff
“Its pretty clear that we are in an all out class war here and everyone seems to know it,” wrote Andrew Sernatinger in a thought-provoking analysis of the dynamics between union leadership, rank and file members and non-union/unemployed workers who have been participating in the demonstrations in Madison, Wisconsin over recent weeks (http://www.solidarity-us.org/current/node/3175).
The unofficial spokesperson of the ruling class, billionaire CEO Warren Buffet famously asserted his class’s foreknowledge of said war when he told the New York Times’ Ben Stein in 2006, “there’s class warfare, all right, but it’s my class, the rich class, that’s making war, and we’re winning.”
Considering that Buffet made those comments a full two years before the banks crashed and unemployment skyrocketed, the supplemental history of the past five years can be summed up by saying the generals of the opposing army have marshaled their ground forces in the form of Republican governors and congress people and called in air support in the form of the Koch Brothers and the Obama Administration and are presently attempting to bomb the working class back to the stone age.
As a friend who has held a host of elected union positions within AFSCME Local 82 at the University of Wisconsin at Milwaukee has said repeatedly since Scott Walker’s Budget Repair Bill was released, “it may be class war but it ain’t the revolution.”

3 comments on “Realpolitik in the Wood Violet State”

Actually the unions and Democrats agreed to the budget cuts and pension reforms that Walker wanted and needed, they just didn’t want to get rid of collective bargaining. Even Walker on the phone with fake Koch was saying that was the most important thing. Because what they will do without collective bargaining the state and local govt’s can change anything they want in the work contract. They could make teachers come in 2 hours earlier in the morning in order to help with the school and setting up for the day and also give them time for their classes. Or lets say this time in the Parks and recreations dept in a county that is having financial difficulty, they decided to put he workers on 4 day work weeks to clear a hole in the budget. And if they don’t like it then they are fired and new workers are hired and they may be just part time.

Very good outline. One thing, little to no focus on efforts underway to organize for this general strike. No mention of the South Central Labor Federation delegates’ vote to “endorse” a general strike and to oppose cuts in social services. For more info, go to: http://www.scfl.org and http://www.madison.iww.org.
I spoke with dozens of workers from across Wisconsin at rallies and not one had heard of this through their unions. Instead, the union leaders and Dems work OT to focus everything on recalls that can’t possibly affect change for months. Not by accident, that.

As an ex-public employee myself (currently unemployed), I can’t even begin to describe the heights (depths) of my love for this piece. Bonus points for calling out President Change. It’s long overdue for American Labor to cut ties with the Democratic Party, before those ties strangle us to death for good.
Regards from Portland, OR. 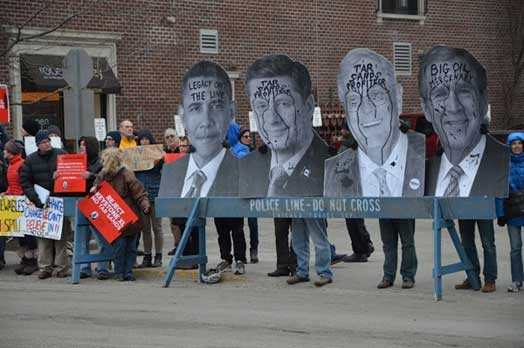 Obama was in Chicago this past Wednesday and his motorcade passed by a spirited demonstration – Chicago Says No Keystone XL – led by 350.org and the Sierra Club Illinois…

Aaron Hughes of IVAW sent me a photo of my “Operation Exposure” image wheatpasted up in the streets of Lawrence, Kansas for a recent exhibition of the prints that Justseeds…