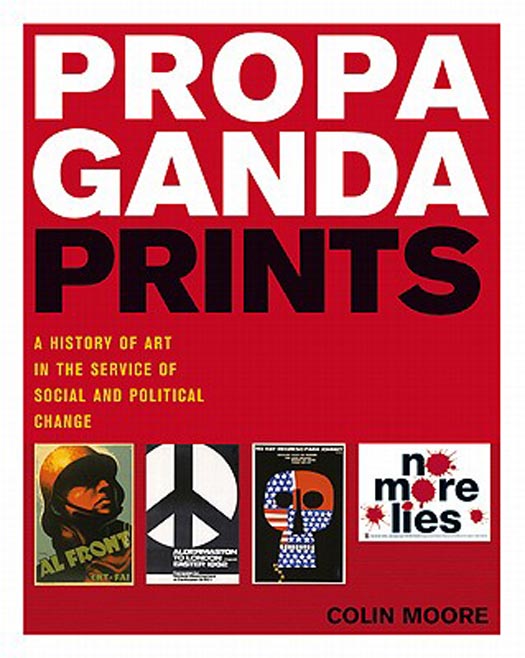 Propaganda Prints is an ambitious project, attempting to present the full scope of “art in the service of social and political change” (per the subtitle) within a 200 page coffee table book. Colin Moore has done a great job creating a broad and accessible volume, heavily illustrated and strung together by an easy to read narrative that carries us from the earliest human communication up through the present. The design is clean and inviting, and Moore has pulled together what functions as a greatest hits of Western political graphics.

At the same time his attempts at broad inclusion, while admirable, also work against the book. Both of the concepts in the title, Propaganda and Prints, are as broadly defined as possible, so propaganda includes everything from state-published exhortations to war to individual political self-expression, social movement media to commercial advertising. Within this diverse mix, it becomes difficult to get a clear vision of what isn’t propaganda. The same goes for printmaking, which here includes coins, mosaics, architecture, tapestry, and sculpture—in fact we’re almost a quarter of the way through the book before the printing press is invented. Moore has neither the space nor the breadth of actual information and analysis to be so ecumenical, which shows when it comes to geographic inclusion. The book features material from non-Western locales such as China, Cuba, and Mexico, but graphic work from Africa, the South Pacific, Eastern Europe (outside of the Soviet Union), and the Arab world is almost completely absent.

Propaganda Prints seems an attempt to update the canonical Political Graphics: Art as a Weapon by Robert Phillippe (London: Phaidon, 1982), but without the same level of research or attention to detail. This is too bad, because Moore’s writing is strongest when in hones in on specific examples and how they functioned in the world, such as an 11th Century Bayeux tapestry or some of the work of the U.S.’s Federal Arts Project in 1930s. At these points the text and images hum along as a cohesive and well-oiled machine. Where we don’t get Moore’s detailed insights into unique images or objects, the book falls into a very cursory overview of world history, where the posters and prints become mere illustrations to a text with limited information about their production or use.

Almost twenty pages are dedicated to mid 19th century and early 20th century advertising, and while the work of Chéret, Toulouse-Lautrec, Art Nouveau, and the Vienniesse Seccessionists are all deeply important to the history of design, it’s unclear why they demand so much real estate in a book on political propaganda. Although I’m sympathetic to including commercial advertising design under the rubric of propaganda, this book is not an effective introduction to either the history of advertising or Modernist design. Moore seems to be stretching here, and has taken on much more than can be effectively accomplished in 200 heavily illustrated pages. I like seeing Goya, Beardsley, Rodchenko, and the Taller de Grafica Popular all under one roof, but the connections between them are left threadbare, and there is not enough to tell us what brings these disparate things together, never mind what makes them unique expressions of their historical, social, and political moments. In the absence of these specifics, it would have been nice to read more original thought about the overarching concept of propaganda, and how all of this material affects us en masse.

Much of the graphic work included in Propaganda Prints is powerful—from World War I recruitment posters to Cuban public service announcements, anti-Vietnam War prints to Soviet film posters—and will be exciting to both novices and students of design. Very little of the content will be unfamiliar to those with a working knowledge in the history of posters and political graphics, and looking through the book is a bit like visiting old friends. Comfortable, enjoyable, but few surprises. Moore has attempted to create both a serious visual history of propaganda and an basic introduction to all things visual and political. He’s partially succeeded at both.