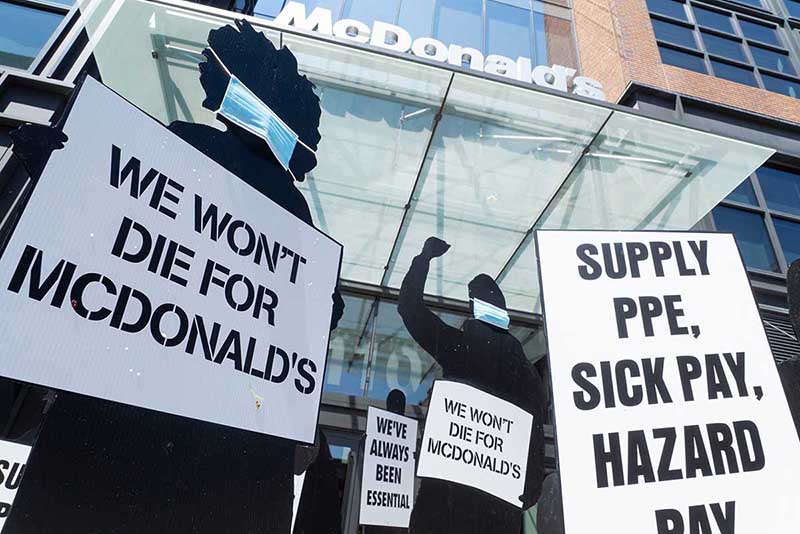 SEIU (the Service Employees International Union) recently asked the Art Build Workers to assist with a creative form of protest during a Fight for $15 protest outside the main entrance at the McDonalds headquarters in downtown Chicago on May 20th. The challenge was how to present a demonstration without actually having people present at a demo considering the risks of large crowds gathering during the Covid-19 pandemic. The Covid 19-safe solution that SEIU came up with and asked us to design was to place 30 cut out figures of striking workers in front of the main entrance of the McDonald’s headquarters. Each figure would be holding a sign with a Fight for $15 slogan. This action would be timed to take place on the same day that McDonald’s cooks and cashiers in 20 cities across the United States were walking off the job due to the companies’ failure to protect workers during the COVID-19 pandemic. It was also timed to take place the day before McDonald’s annual shareholders meeting.

In preparing for this action. Joe Brusky suggested to SEIU that the silhouettes be based upon photos of people that he had taken of Fight for $15 actions over the years. This added a more personal connection to the work. Next, Claudio Martinez turned Joe’s photographs into silhouettes.

We then purchased sheets of 4’ x 8’ black corrugated plastic sheets. I projected the images that Claudio designed onto the boards and traced out the silhouettes with a white china marker and then handed off the 30 sheets to Paul Kjelland (of Justseeds) who spent a few days cutting them out and adding the sign text by cutting out the negative shape on a vinyl plotter.

The slogans for the signs had all been chosen by SEIU, but Paul had worked closely with his contact at SEIU to make sure that the selected slogans were concise and would read well from a distance. At the same time, Josie Osborne and Kim Cosier constructed the plywood bases that had a PVC tube for mounting the cut outs to and Jeanette Arellano helped fill the 30 sandbags that would weigh the cut out figures down in case of strong winds.

We then loaded up the van and headed to Chicago with no idea what to expect. We knew first and foremost that this action was designed for the camera. SEIU asked Joe Brusky (who we call the “people’s photographer”) to document the action and to send SEIU photos by 11:00am to time with the national strike action by McDonald’s workers. This way the SEIU union could share the photos of the Chicago action via Twitter and their other social media handles with the striking McDonalds workers in 20 cities across the country. Equally important: more people could become aware of just how egregious McDonalds actions have been towards its workers.

“As the pandemic took hold, McDonald’s dished out nearly $1 billion in dividends to line shareholders’ pockets, but we had to go on strike to get masks,” said San Jose McDonald’s worker Maria Chavez, who led a wildcat walkout at her store in March. “The company has failed in every way to protect us—it has failed to provide adequate PPE, failed to enforce social distancing, failed to protect employees when workers have tested positive for COVID-19 and failed to provide paid sick leave to all who wear the company’s uniform. We don’t want to die, so we are going on strike, to let McDonald’s know our lives are essential.”

Wednesday’s strikes will be the first coordinated across the nation by McDonald’s workers since the onset of the pandemic. Cooks and cashiers at Chavez’s San Jose McDonald’s walked off the job in late March, protesting a lack of masks, soap and hand sanitizer, sparking a wave of strikes by McDonald’s and other fast-food workers that has included statewide walkouts in Florida and California.

The walkouts on the eve of the company’s shareholder meeting will highlight McDonald’s continued failed response to the pandemic, even as it moves to reopen dining room across the country, including the following recent examples: In Houston, after a McDonald’s worker tested positive for COVID-19, 12 other workers were forced to self quarantine for two weeks—without pay. In Chicago, the company failed to notify workers in at least two stores after employees tested positive and failed to close the stores for a deep cleaning. Additional workers got sick and tested positive. In San Francisco, workers filed a complaint with the city’s Health Department alleging managers told them ‘not to worry’ about a lack of masks in the store, suggesting they use coffee filters instead. At another McDonald’s in San Francisco, the company did not inform workers when a colleague tested positive, according to a separate Health Department complaint. Workers heard about the positive result and when one crew member who has diabetes asked for paid time off, she was denied. That worker soon tested positive and, again, the company did not reach out to coworkers who had been in contact with her to get them to quarantine. In Ontario, Calif., a worker who tested positive filed a complaint with the San Bernardino County Department of Public Health alleging her co-workers were not informed of her infection. The worker worked closely with at least seven others, and they never received instructions about sanitizing high-touch surfaces, or shared equipment, which is not done in the restaurant. Crew members were given a single mask and have to wash it. In Detroit, workers at a McDonald’s were issued a single mask and told to clean it with hand sanitizer.”

Putting corporate greed over the interests of McDonald’s workers led to a one-day strike/walkout at numerous McDonalds on Wednesday, May 20th in cities ranging from Los Angeles, Oakland, San Francisco, Kansas City, St. Louis, Detroit, Flint, Tampa, Orlando, Miami, Charleston, Chicago, Houston, Little Rock, Memphis, Milwaukee, and more. Inspired by the McDonald’s workers, cooks and cashiers from other fast-food restaurants, including Domino’s, Burger King and Wendy’s were expected to join the walkouts in some cities.

The silhouette art action was in solidarity with these striking workers on the front lines. SEIU had asked that the action be timed to take place at 11:00am so we arrived at 10:30am to the posh West Loop neighborhood where the McDonald’s headquarters is located and noticed four police cars out front. When we scouted the front entrance we also noticed a private security person (we assume) pretending to stroll a baby in a carriage, as he routinely looped back to dialog with the police. His pace picked up once we started unloading the silhouettes, the stands, and the sandbags. I can only imagine what his conversation was with the police once we began setting up the 30 cardboard protestors in front of the narrow entrance.

For the most part the police just sat in their cars and watched. You could often equate the lack of aggressiveness by the police to how they profile the race of the protestors, but in this case three out of the five people installing the signs were Latinx. One police officer got out and told us to be sure that we kept enough space for people to still walk down the sidewalk. Another police officer drove by and said he appreciated the messages on the signs. Other than those interactions and a few people walking by voicing their support for the signs, it was very nonchalant. The most energy exerted was by Joe Brusky who was taking photos nonstop with his phone and his good camera and sending them directly to his SEIU contact who were then sharing them with their vast social media network.

A local television news station also sent a camera crew who filmed the action. They asked to interview us (the artists) but we declined and followed the protocol given to us by SEIU to simply give them the contact info for the media relations person at SEIU. We understood that those speaking to the mass media should be the workers themselves and the union organizers. Our part was to supply the cut out figures and the photos.

We left the silhouettes up for an hour and they were seen by those passing by, but considering that the entrance was on a side street, the building served more as a backdrop for the photos. We then loaded the cut outs back into the van and brought them to the SEIU storage office in Pilsen so that they can be available for future actions.

The SEIU storage unit was inspiring to see. We met our friend Lauren Cumbia from SEIU and got to appreciate how much SEIU in Chicago prioritizes activist art in their tactics. The storage unit was packed floor to ceiling with screenprinted picket signs, puppets, and offset posters. It was an honor to add the silhouette signs to the mix.

We then spent the day in Pilsen admiring all the murals for SEIU and the artists were not done yet with agitating against McDonalds. Once it got dark we returned to their headquarters with a set of Overpass Light Brigade signs to stage another action.

This time the streets were near empty. No cops. No visible security. Kim Cosier and Josie Osborne from the Art Build Workers joined us as we all held the signs up in front of the entrance, while Joe took long exposure photographs. (Joe Brusky is a founding member of the OLB, along with Lane Hall and Lisa Moline.)

The nighttime demo really hit home that this action was truly designed for the camera and social media. SEIU termed the demo a “Covid-safe action” and we appreciated that these concerns were paramount to SEIU from the start. We also appreciated being invited to collaborate on creative ways to agitate against corporate power and to stand in solidarity with the Fight for $15 movement.  We recognize that art is at its best when it is in collaboration with a movement. There is power in the Fight for $15 movement and there is power in a union.

video by Joe Brusky featuring audio from past Fight for $15 actions.