A friend told me about this artist Knaan, a Somali-Canadian who recently made this video. I found his work and political views to be really provocative and interesting. He was brought up while discussing piracy and the recent hostage situations off the coast of Somalia.
I was referencing Roger Peet’s previous post. Somali Pirates Twist the Knife, about pirate demands for money to be used to clean up coastal pollution. I was then referred to the following article You are Being Lied to About Pirates on Huffington Post, which states:

Everyone agrees they were ordinary Somalian fishermen who at first took speedboats to try to dissuade the dumpers and trawlers, or at least wage a ‘tax’ on them. They call themselves the Volunteer Coastguard of Somalia – and it’s not hard to see why. In a surreal telephone interview, one of the pirate leaders, Sugule Ali, said their motive was “to stop illegal fishing and dumping in our waters… We don’t consider ourselves sea bandits. We consider sea bandits [to be] those who illegally fish and dump in our seas and dump waste in our seas and carry weapons in our seas.” William Scott would understand those words.

It appears that mass media and governments are using labels like “Pirates” to be dismissive of their demands and context. Labeling people and groups with the methods, or tactics, they use to arrive at their goals is incredibly effective in disassociating them from the conditions that lead them to act. If they are just pirates, then they just want booty. Nothing more, nothing less. The same dynamic is created when people are labeled “terrorist”, the demands or impetus that leads one to act isn’t important at all. They are isolated and demonized. Institutional terror by militaries or piracy by looting public wealth in crisis is not labeled as such. Its a problem of the general perspective, that leads to lack of empathy and understanding. I think its necessary to acknowledge this difference in the work we do, and to communicate the depth of these circumstances to avoid replicating mass media narratives.
Without further ado you can read the article below or by going to Huffington Post

As an Americorps member at Twin Cities Habitat for Humanity in Minneapolis, I worked with a lot of Somali refugees. The Twin Cities has a large Somali population. Recently its been mentioned in main stream media for the fact that some of the Somali community members went missing and believed to be in terrorism camps….
I can tell you from my experience with Somali people, they are just like the rest of us. They want to make their place in the world and they want to do it right. If some act out, or if it is believed that some act out of their place, it is their will to live and survive in our world…
At least that’s what I’ve been lead to believe. The pirates are you and me as much as they are “them”

Great research.
I definitely agree with the potential dangers of labeling anything before closely examining its components. Its so much easier to dismiss something once its been thrown into some familiar, generic category, instead of stopping and looking at figuring out what exactly is going on. One of the reasons why use the term “Axis of Evil” pisses me off.

Solidarity with Gaza From the South Bronx

This piece appeared yesterday in the South Bronx. The wall faces the Bruckner Expressway, a highly used elevated highway passing through the Bronx. My pal Anomalous compiles a lot of…

In the mind of the artist

By Lush, from rebel:art. The above is a humorous piece about the commodification of street art. A handful of the work is clever, while other pieces can be easily critiqued,… 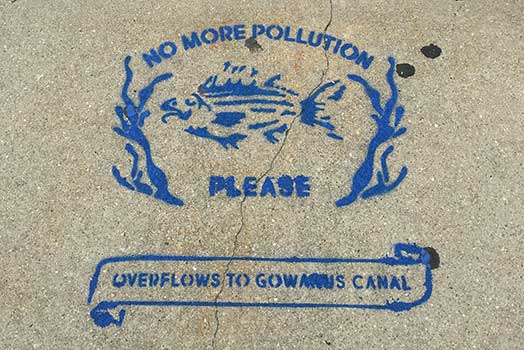 by Kevin Caplicki
Art & Politics, Read the Writing On the Wall

No More Pollution Please Overflows to the Gowanus Canal Brooklyn, NY August 15, 2018 Most of NYC’s 150 year old sewage system is combined with stormwater runoff, according to Swim…

The Electronic Frontier Foundation has recently launched a website, called Teaching Copyright, helping educators and others mentor youth about their activity online. There’s a lot of misinformation out there about…