Events in Madison, Wisconsin have escalated. The Republican controlled Assembly passed the “Budget Repair Bill” in a move that should make anyone who cares about democracy shudder. Next, the Bill moves to the Senate which cannot be voted on until one of the 14 Democratic Senators who fled the State returns or is arrested and dragged back to the State Capital. Massive demonstrations are planned for today and Saturday. Rumors abound that Walker will use the State Police to clear the occupied State Capital at 6:00pm on Saturday. If and when the Bill passes the Republican dominated Senate, we can expect walkouts and calls for a general strike in Wisconsin and beyond.
The Wall Street Journal reports that on 1:00am on Friday “Debate had gone on for 60 hours and 15 Democrats were still waiting to speak when the vote started around 1 a.m. Friday. Speaker Pro Tem Bill Kramer opened the roll and closed it within seconds. Democrats looked around, bewildered. Only 13 of the 38 Democratic members managed to vote in time. Republicans immediately marched out of the chamber in single file. The Democrats rushed at them, pumping their fists and shouting “Shame!” and “Cowards!” The Republicans walked past them without responding. Democrats left the chamber stunned.”

Check out the prank phone call of “David Koch” talking to Gov. Walker in a candid conversation for 20 minutes. The Koch brothers from Wichita, KS are billionaires who help fund the Tea Party movement and right-wing Republican campaigns, including Walker’s campaign.

One comment on “Wisconsin heading towards a General Strike?”

Images, banner drops, tactical media, performances and actions loaded with symbolism were in full effect this week. The Yippies and the Situationists would be proud. Just Do It. 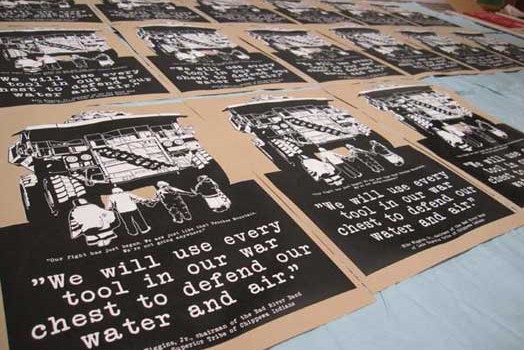 Margaret Rozga – one of Milwaukee’s great activists for the past five decades – wrote the following review of the recent Justseeds show in Milwaukee. She writes: “Uprisings: Images of…

Collectivism After Collapse: Chicago Activist Art Spaces, Collectives, and Projects The two-night event at Mess Hall is an open invitation to Collage Art Association conference attendees and the public to…