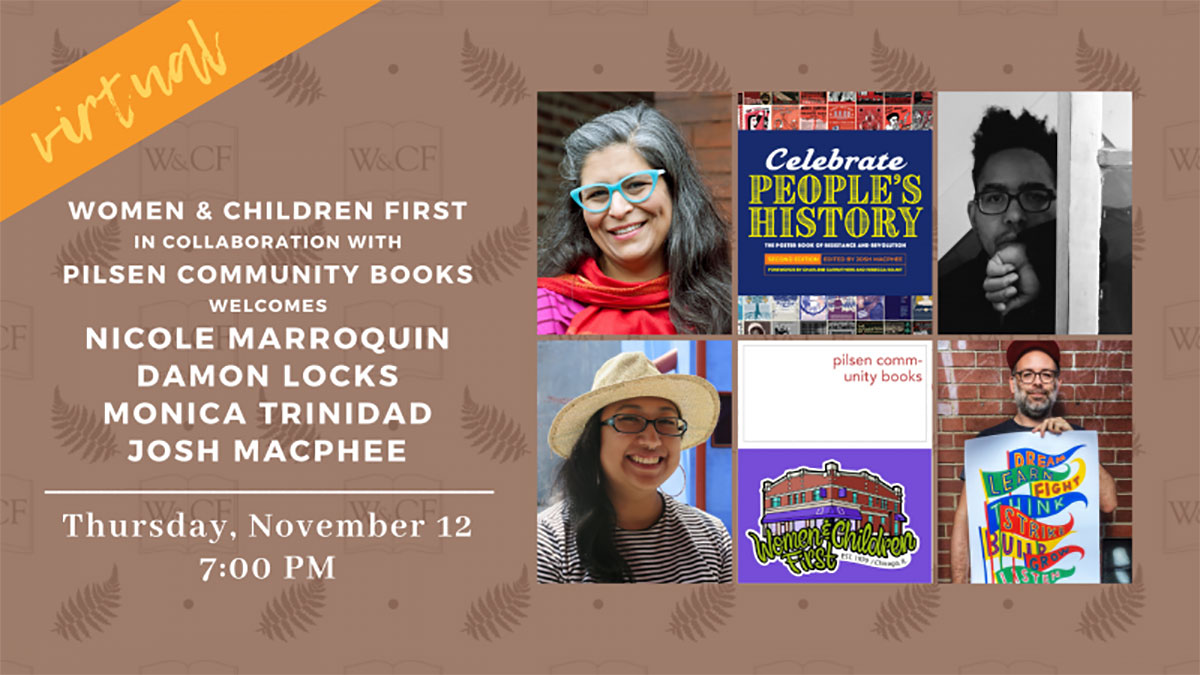 Join us for a virtual panel discussion in honor of Celebrate People’s History!: The Poster Book of Resistance and Revolution. For this event, we’ll be joined by contributors Nicole Marroquin, Damon Locks, Monica Trinidad, and Josh MacPhee.

Women & Children First is excited to co-host this event with Pilsen Community Books. This event will be streamed through PCB’s YouTube channel. Registration link coming soon!

Spanning nearly three thousand years of history–from the ancient Secession of the Plebs to the 2017 protests of the Confederate Soldiers Monument in Durham, from Sojourner Truth to Naoto Matsumura—these posters pay tribute to the long-standing human legacy of revolution, creative activism, and grassroots organizing. In this book, contemporary artists imagine and interpret often-overlooked events and figures in movements for racial justice, women’s rights, queer liberation, labor organizing, and environmental conservation.

Nicole Marroquin is a teacher educator and artist whose work exploring belonging and spatial justice includes research on student uprisings in Chicago Public Schools between 1967-1980, with the aim of recuperating histories of youth and women’s leadership in the struggle for justice. She facilitates projects with young people that engage primary sources to problematize single-source narratives of history, and is faculty at The School of the Art Institute of Chicago. In 2019 she started a social media project called Chicago Raza Research Consortium, on IG or FB @Chicagorazaresearch http://nicole.marroquin.com

Damon Locks is a Chicago-based visual artist, educator, vocalist/musician. He teaches art with Prisons and Neighborhood Arts Project at Stateville Correctional Center. He is a recipient of the Helen Coburn Meier and Tim Meier Achievement Award in the Arts as well as a 3Arts Awardee. He is a Soros Justice Media Fellow. Currently he works in the MCA’s SPACE Program, introducing civically engaged art to students at the high school, Sarah E. Goode STEM Academy. Damon leads the group Black Monument Ensemble and is a founding member of the group The Eternals and the Exploding Star Orchestra.

Monica Trinidad is a queer, Latinx artist and organizer in Chicago, IL. Active in the movement for racial and gender justice, she is the co-founder of For the People Artists Collective, a radical squad of Black artists & artists of color in Chicago, and an emerging member of Justseeds Artists’ Cooperative. Her work has appeared in numerous publications, including NPR Illinois, Chicago Reader, South Side Weekly, Truthout, and more, and has been shown at the DuSable Museum, Jane Addams Hull-House Museum, and the National Museum of Mexican Art. See more of Monica’s work at monicatrinidad.com or follow her on Instagram at @itsmonicatrinidad.

Josh MacPhee is a designer, artist, and archivist. He is a founding member of the Justseeds Artists’ Cooperative (Justseeds.org), the author of Celebrate People’s History: The Poster Book of Resistance and Revolution and An Encyclopedia of Political Record Labels, and co-editor of Signal: A Journal of International Political Graphics and Culture. He co-founded and helps run Interference Archive, a public collection of cultural materials produced by social movements (InterferenceArchive.org).