I will be presenting some of my research on the history of the Shinkolobwe mine for the ongoing Nuclear Waste Scholar Series organized by Hanford Challenge, a Washington-based group focusing public attention on the history and future of the Hanford site. Hanford is the most intensively contaminated place in the western hemisphere, and most of that contamination comes from the high-level radioactive waste left behind after the processing of the ore from the most powerful uranium deposit ever found on Earth: Congo’s Shinkolobwe mine. This mine produced the material that made the Manhattan project possible, and transformed America’s sense of itself as a world-bestriding empire with the power to destroy the planet. The stories of the people who dug those stones have been excised from history, even as their work and their struggles have inspired some of our most popular culture, like the mythical Marvel comics kingdom of Wakanda.

The mine’s exploitation has left a legacy of contaminated territories, poisoned communities, and a gross shadow of atomic devastation which echoes through our most popular contemporary stories, and clouds our ability to imagine a different world. This presentation will describe the arc of that history, and display an original linocut map-print which traces the evidence left behind in the landscape by those Congolese rocks; the foundation of the Manhattan Project. 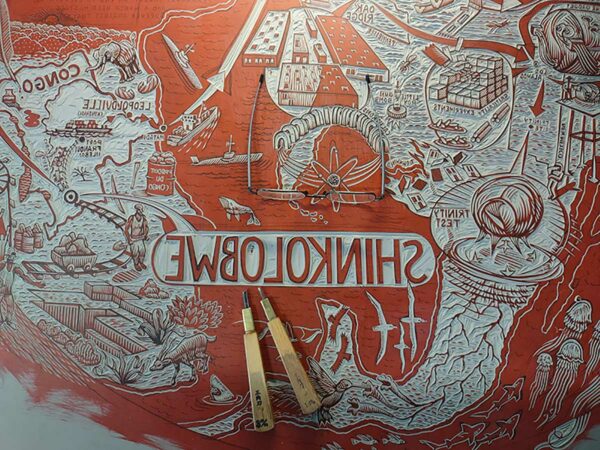