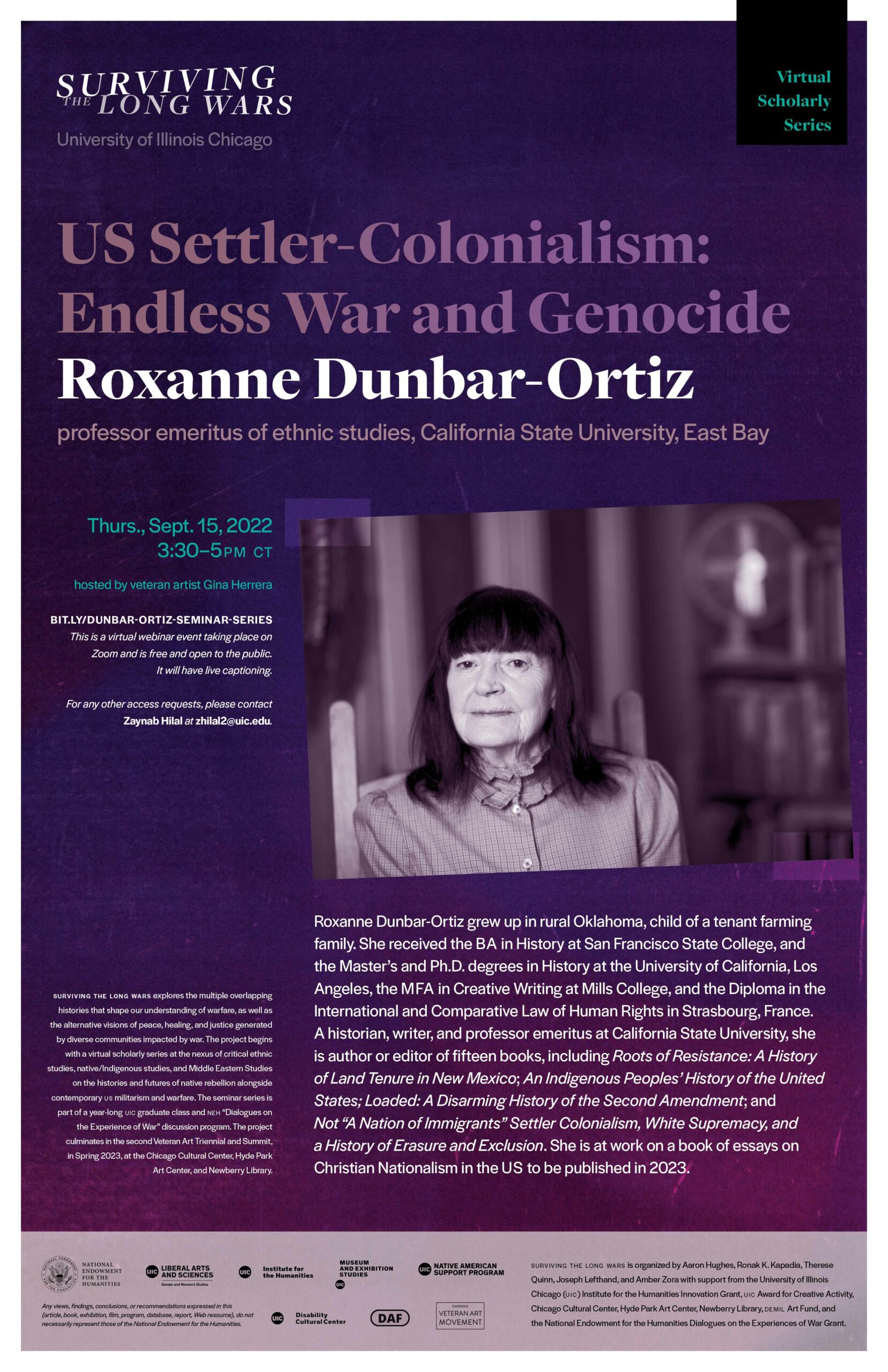 Registration is now open here: http://bit.ly/dunbar-ortiz-seminar-series
This is a virtual webinar event taking place on Zoom and free and open to the public. It will have live captioning. For any other access requests, please contact Zaynab Hilal at zhilal2@uic.edu
A historian, writer, and professor emeritus at California State University, East Bay, Dr. Roxanne Dunbar-Ortiz is author or editor of fifteen books, including Roots of Resistance: A History of Land Tenure in New Mexico; An Indigenous Peoples’ History of the United States; Loaded: A Disarming History of the Second Amendment; and Not “A Nation of Immigrants” Settler Colonialism, White Supremacy, and a History of Erasure and Exclusion. She is at work on a book of essays on Christian Nationalism in the US to be published in 2023.
Registration is now open here: http://bit.ly/dunbar-ortiz-seminar-series
SURVIVING THE LONG WARS explores the multiple overlapping histories that shape our understanding of warfare, as well as the alternative visions of peace, healing, and justice generated by diverse communities impacted by war. The project begins with a virtual scholarly series at the nexus of critical ethnic studies, native/Indigenous studies, and Middle Eastern Studies on the histories and futures of native rebellion alongside contemporary US militarism and warfare. The seminar series is part of a year-long UIC class and NEH “Dialogues on the Experience of War” discussion program taught by veteran artist Aaron Hughes. The project culminates in the second Veteran Art Triennial and Summit, in Spring 2023, at the Chicago Cultural Center, Hyde Park Art Center, and Newberry Library.
SURVIVING THE LONG WARS is organized by Aaron Hughes, Ronak K. Kapadia, Therese Quinn, Joseph Lefthand, and Amber Zora with support from the University of Illinois Chicago (UIC) Institute for the Humanities Innovation Grant, UIC Award for Creative Activity, Chicago Cultural Center, Hyde Park Art Center, Newberry Library, DEMIL Art Fund, and the National Endowment for the Humanities Dialogues on the Experiences of War Grant.
Special thanks to the Disability Cultural Center, the Native American Support Program, and the Women’s Leadership and Resource Center at UIC.
Anti-capitalismAnti-warEducationGlobal SolidarityIndigenous ResistanceRacial Justice