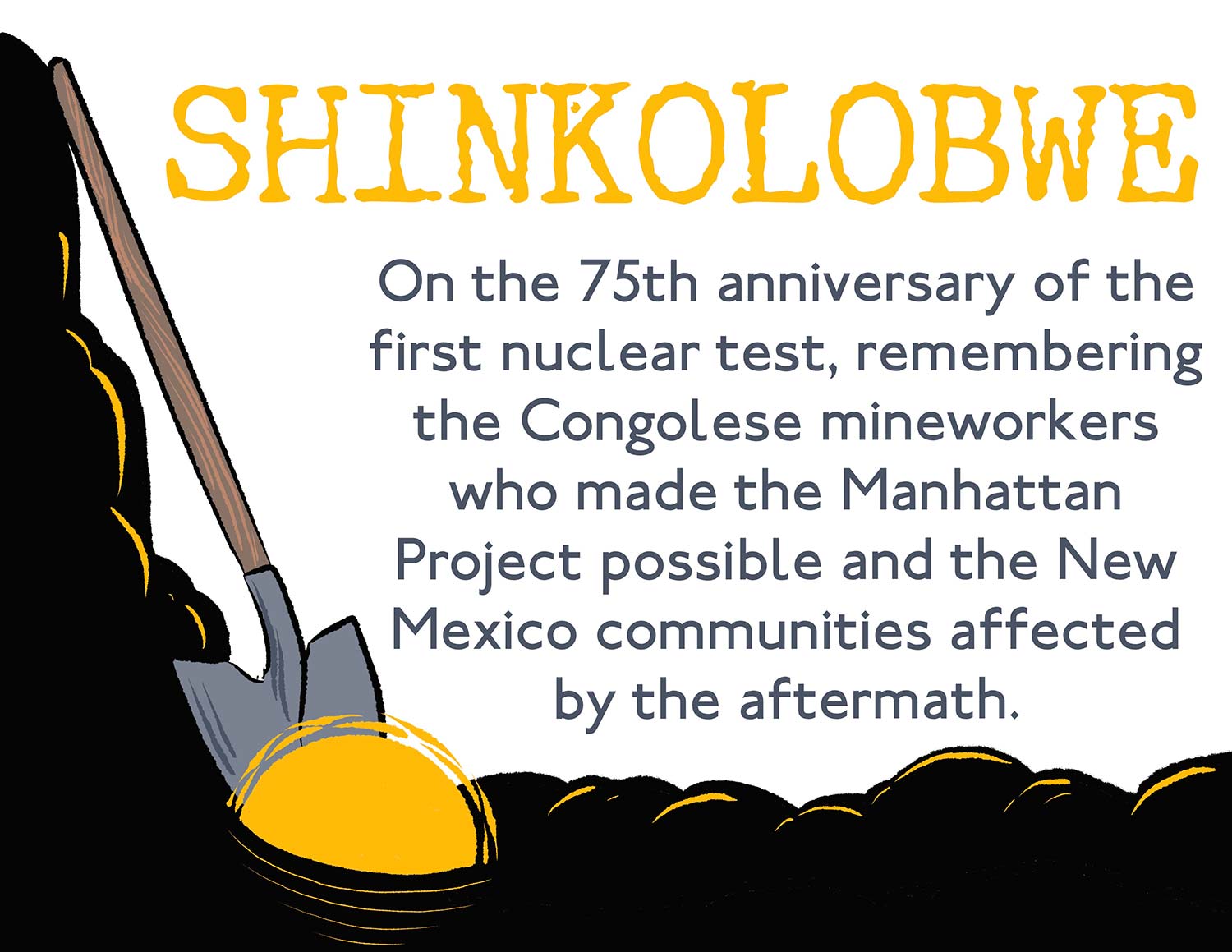 SHINKOLOBWE: On the 75th anniversary of the Trinity Test, a webinar telling the stories of the Congolese miners who made the Manhattan Project possible, and the stories of those affected in New Mexico after the first ever nuclear test.

On July 16th, 2020 at 6pm Mountain Time, on the 75th anniversary of the first ever test of a nuclear weapon, an international group of organizations will present a webinar connecting the histories of the front-line communities whose sacrifices made possible the United States’ efforts to create an atomic weapon during World War II. From the Shinkolobwe uranium mine in the Democratic Republic of Congo to New Mexico where the bomb was completed, this first-of-its-kind webinar will focus on the unheard stories of communities across the world still living with the consequences of the Manhattan Project.

From the Shinkolobwe uranium mine, semi-famous as the inspiration for the Vibranium in Marvel’s Black Panther comics, to the Southwest US, presenters will include descendants, survivors, and community organizers who continue to work toward recognition and compensation for the injustices committed against their peoples, while also fighting contemporary battles and new nuclear threats. Isaiah Mombilo from the expatriate organization Congolese Civil Society in South Africa will tell the stories of the families and descendents of the Shinkolobwe mineworkers who survived years of labor in the most highly concentrated uranium deposit on Earth. Rodrigue Muganwa from the Congolese organization CRISPAL-Afrique will highlight local resistance to the reopening of the Shinkolobwe mine. Beata Tsosie-Peña of Tewa Women United from the Pueblo of Santa Clara in northern New Mexico will talk about how the Manhattan Project’s Los Alamos National Labs continues to impact local health, environment, and indigenous ways of life.

The webinar is coordinated by Leona Morgan of the Nuclear Issues Study Group (Albuquerque, NM) and Roger Peet of the Justseeds Artists’ Cooperative (Portland, OR) in association with CCSSA-South Africa and CRISPAL-Afrique. This event is part of the Nuclear Issues Study Group’s “We Are Not A Wasteland” web series and can be streamed live at www.fb.com/nuclearissuesstudygroup starting at 6pm Mountain time on July 16, 2020. This webinar is open to all attendees and will include art, poetry, and music.