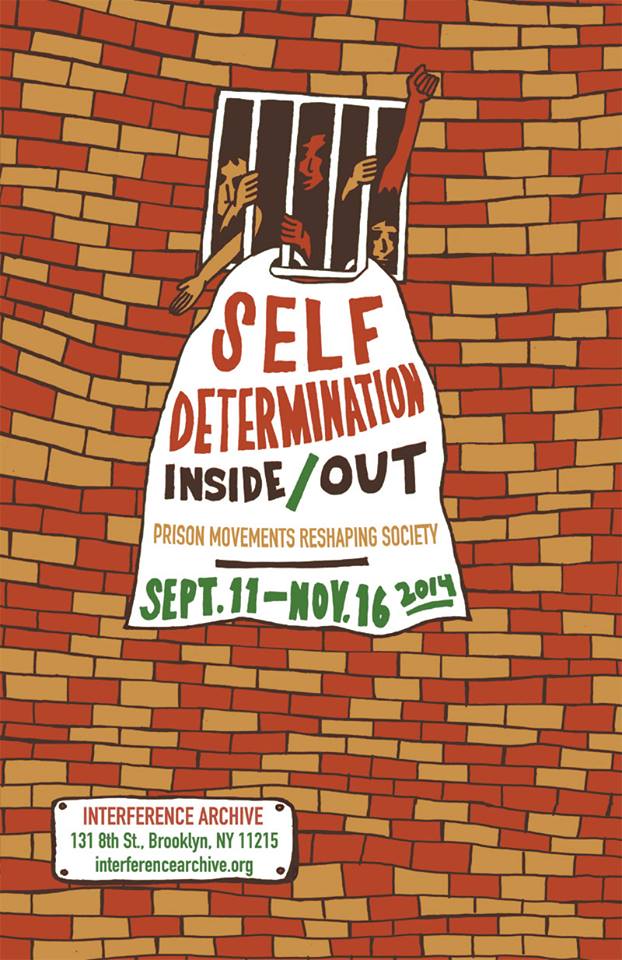 Interference Archive presents Self-Determination Inside/Out, a comprehensive exhibition and public program series featuring the cultural materials produced by incarcerated people and their allies. Ranging from the Attica Rebellion to political prisoners, AIDS education to prisoners-as-laborers, the struggles of incarcerated women and queer people to the current wave of hunger strikes in prisons and detention centers across the country, these materials fundamentally recast the history of the prison-industrial complex. The exhibition shows incarcerated people not simply as the objects of state repression or social justice activism, but as active initiators and leaders in the critique of “criminal justice”—and other forms of injustice—in the U.S. Through publications created on the inside, posters, ephemera, audio recordings, film and video, and a schedule of public programs, Self-Determination Inside/Out highlights key moments in struggles for justice in the prison system. Organized by Molly Fair, Josh MacPhee, Anika Paris, Laura Whitehorn, and Ryan Wong

The 1970s heralded the start of the largest expansion of America’s penal system since the end of the Civil War and the dismantling of slavery. The dearth of employment in the post-industrial economy coupled with a broadened definition of “crime” to include poverty and political radicalism fed a call for “law and order.” A new penal system—a system of social control—arose in response: one that disproportionately targets Blacks and Latin@s and that has grown at alarming rates in size, scope, and sophistication. Increasingly, women, queer people, and immigrants face the brunt of American mass incarceration. Yet at every step of its development, the prison system has encountered fierce resistance from the people it was designed to cage and silence.

Self-Determination Inside/Out examines these issues starting from the 1971 Attica Rebellion, one of the best known uprisings of incarcerated people in American history. This rebellion was a direct response to the dramatic overcrowding of prisons and the lack of opportunities for personal expression and development. The rebellion’s organizers tied their fight to parallel struggles against American imperialism and systematic oppression in the greater society. Attica sparked uprisings in prisons across the country, and the demands and critiques of those in revolt transformed discourse and organizing on the outside. This exchange has persisted in the years that followed, with organizing efforts of incarcerated people revealing that the violence of the carceral state is not limited to the confines of prison walls.

Public Programs (more to be added)

Thursday, October 9, 7:00 pm
[OFFSITE: At CUNY Grad Center]
Prison is a form of violence against women
This event will highlight women and transpeople’s struggles against “protective” isolation, the criminalization of self defense, and negligent healthcare through short videos, readings, and discussion with people who have been directly involved in organizing within prisons. The program will include concrete ways to provide support for current organizing.

Tuesday, October 14, 7:00 pm
Film screening: Control
Control is a documentary portrait of mass incarceration as it reverberates through our homes and communities. It is the story of a family whose life is relentlessly punctuated by an intrusive, destructive, counter-intuitive penal system. The film will be followed by a discussion with the filmmakers and youth criminal justice advocates.

Saturday November 15, 5:00 pm
Film Screening: Out In The Night
Join director blair dorosh walter for a screening of Out in the Night, a documentary about the NJ4. Other guests TBA.

Self-Determination Inside/Out offers community groups and high school- and college-level students the opportunity to engage with and examine materials created by activists on the inside and their allies. Courses or organizing groups focused on Criminal Justice, U.S. History and Politics, Public Health and Policy, Race, Gender, and LGBT studies are particularly suited. To arrange a visit, contact us here