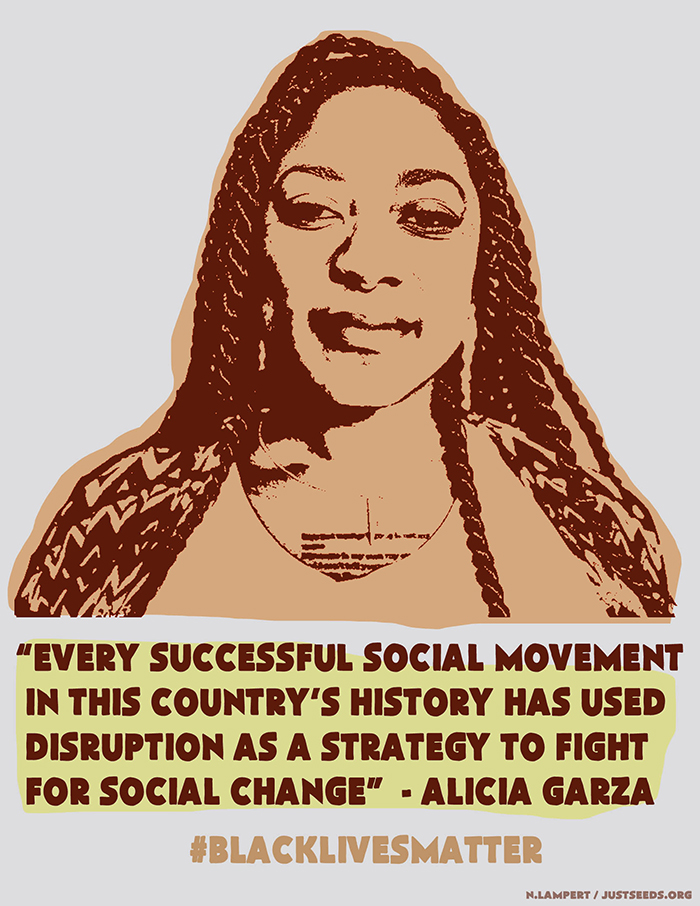 Words of wisdom from Alicia Garza. I designed this image after being so inspired by a talk by Alicia Garza and Patrisse Cullors at the University of Wisconsin-Milwaukee on October 13, 2016. Garza and Cullors (along with Opal Tometi) started the hashtag #BlackLivesMatter in 2013 as a response to the acquittal of George Zimmerman in the shooting death of unarmed African American teenager Trayvon Martin. After the talk I read a number of interviews with Garza and Cullors and decided to base a design around Garza’s quote: “Every successful social movement in this country’s history has used disruption as a strategy for social change.”

This quote rings true today. The street demonstrations and uprisings in Minneapolis and across the country and the world are of the utmost importance. Nothing changes if people do not take to the streets and demand real change. System change. People rising up against police brutality, white supremacy, and those in power. Alicia Garza’s words and vision during the uprisings against the police murder of George Floyd are equally indispensable. She stated recently about the street demos: “I’m not going to spend my time telling people to go home… All I can think about right now is, What’s happening with this investigation? Why are three of the four officers still at home with their families while George Floyd’s family is destroyed? Why is there no state of emergency around white nationalists trying to create chaos? We don’t have time to finger-wag at protesters about property. That can be rebuilt. Target will reopen. The stores will reopen. That’s assured. What is not assured is our safety and real justice.”