You can find the rest of the designs from War Is Trauma available for download at the projects own website
ivaw.org/war-is-trauma
War Is Trauma is a portfolio of handmade prints produced by the Justseeds Artists’ Cooperative in collaboration with the Iraq Veterans Against the War (IVAW). This portfolio transpired out of a street poster project, from November 2010, which a number of Justseeds artists provided graphics for “Operation Recovery” – a campaign to stop the deployment of traumatized troops and win service members and veterans right to heal. Posters were pasted in public, replacing many corporate advertisements, to focus public attention towards the issues not being discussed – GI Resistance, Post Traumatic Stress Disorder (PTSD), sexual assault in the military or Military Sexual Trauma (MST), and Traumatic Brain Injury (TBI). The action led to another collaboration between Justseeds and IVAW – an “Operation Recovery” booklet published by Printed Matter in NYC and currently the War is Trauma portfolio. For this project over 30 artists from Justseeds, IVAW, and our allies have each created a print that addresses “Operation Recovery,” its larger goals of supporting service member and veterans right to heal, GI resistance, challenging the culture of militarism in the US, and ending the war in Afghanistan. A total of 130 portfolios have been created that we hope inspire 130 exhibitions that can act as a starting point to bring different people together – veterans, civilians, Iraqis, Afghans, and others to dialogue on issues.
The prints are housed within a handmade paper cover from the Combat Paper Project – paper whose source material derives from military uniforms that veterans have cut into small piece, mixed with water, and pulped into paper as part of the healing process. Drew Cameron of the CPP writes, “The batch that I made for the portfolio is mostly created from Army Combat Uniforms that we were worn with the Stryker battalions out of Fort Lewis, WA. These are the same guys who rolled out of Iraq early back in July 2010. I also added Egyptian cotton to strengthen it. I like to imagine that the mill workers who made the cloth I used were the same one’s rising up last spring.”
Justseeds artists include: Josh MacPhee (Brooklyn), Mary Tremonte (Pittsburgh), Kevin Caplicki (Brooklyn), Chris Stain (Queens), Thea Gahr (Portland, OR), Bec Young (Pittsburgh), Erik Ruin (Providence), Pete Yahnke Railand (Milwaukee), Alec Dunn (Portland, OR), Colin Matthes (Milwaukee), Nicolas Lampert (Milwaukee), Jesse Purcell (Montreal), Roger Peet (Portland, OR), Molly Fair (Brooklyn), Mazatl (Mexico City), Shaun Slifer (Pittsburg), Dylan AT Miner (E. Lansing)
IVAW Members include: Drew Cameron (Army Veteran, Vermont), Joyce Wagner (Marine Veteran, Pittsburgh), Aaron Hughes (IL Army National Guard Veteran, Chicago), Jeremy Bergren (Marine Veteran, North Carolina), Peter Sullivan (IL Army National Guard Veteran, Chicago), Chris Arendt (MI Army National Guard Veteran, Michigan), Malachi Muncy (TX Army National Guard Veteran, Texas), Ash Kyrie (WI Army National Guard Veteran, Wisconsin), and posters from the Bay Area Civilian Soldier Alliance members Siri Margerin and Nave Fortin.
Allied artists include: Michael Rakowitz (Chicago), Marshall Weber (Booklyn Artists Alliance, Brooklyn), Dan S. Wang (Madison, WI), Harrell Fletcher and Transformazium with Brettiny Hucks, Gayla Jean Clemons, Deon Archie, Deshon LeGrand (Portland, OR / Braddock, PA), Temporary Services (Chicago, Philadelphia, Copenhagen)
Overall, War is Trauma is limited to 130 portfolios. The majority of these went to IVAW and the artists so the Justseeds store has around 20-25 to sell. Meaning: these copies may not last long. Booklyn and IVAW also have some copies to sell, so please also check their websites.
Now that we have these 130 portfolios, let’s stage 130 exhibitions to bring these posters and messages to our communities. Let’s continue to support GI resistance and the activist campaigns to end the occupations and the culture of militarism. 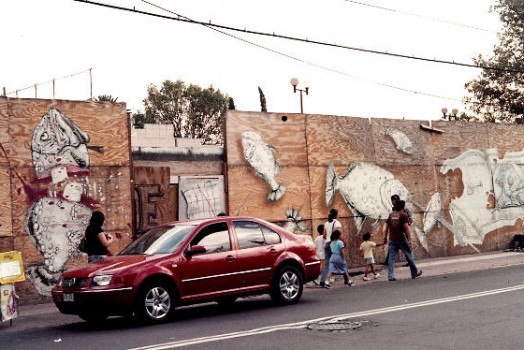 A strong message sent to a middle class neighborhood in the north of Mexico City. This painting is pasted on to temporary walls surrounding a building site for a new…