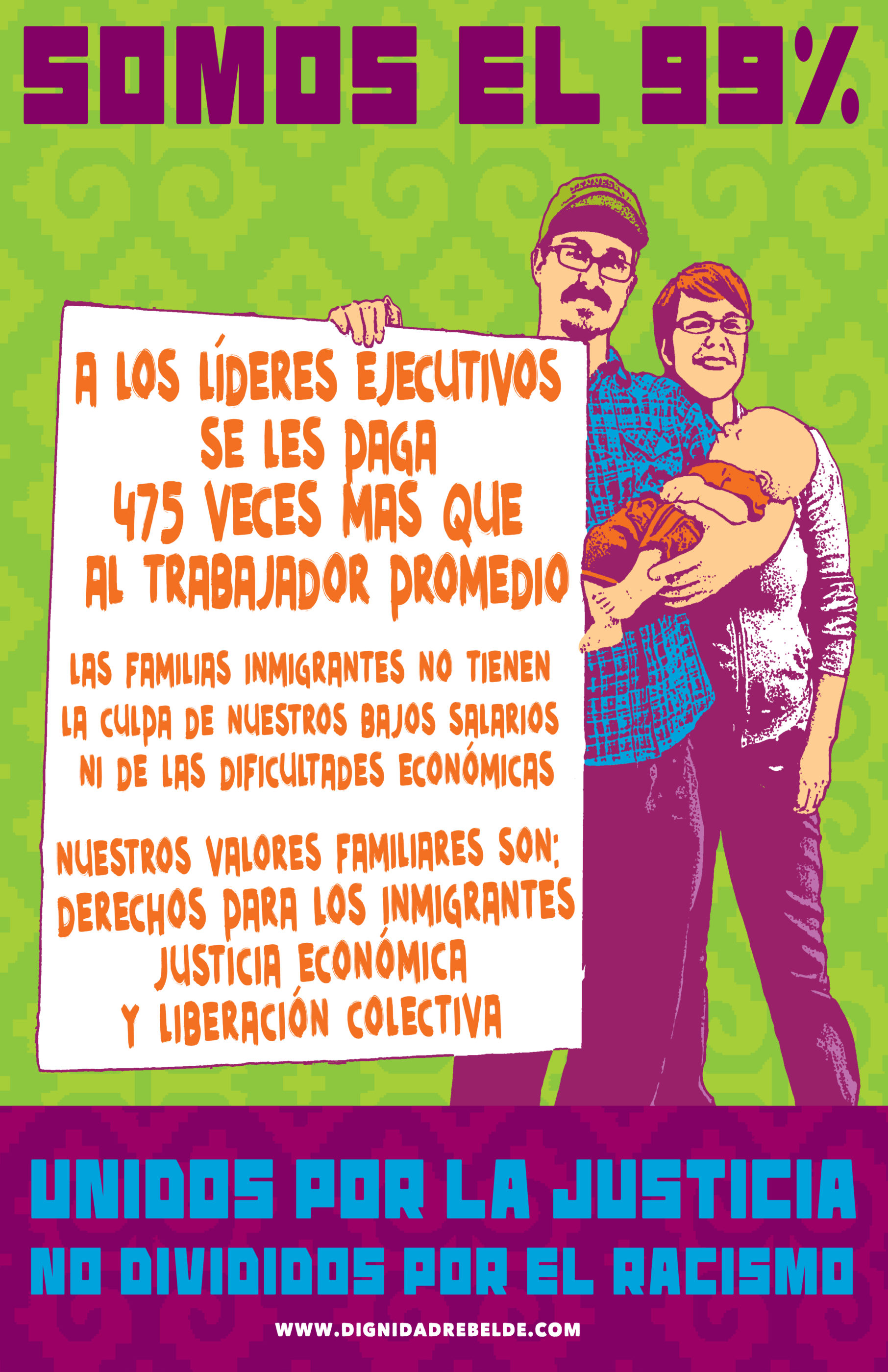 Created in partnership with Chris Crass this poster put forth a set of goals.

Goals of the “Unidos Por La Justicia, No Divididos Por El Racismo/United for Justice, Not Divided by Racism” poster

1. We want to build up powerful, working class-based, feminist, multiracial movements for collective liberation. The Occupy movement is an incredible convergence of movements for economic, social, racial, gender, and environmental justice. The Occupy movement not only resonates with millions of people, but it actively invites millions of people to participate in the creation of both the movement and the vision of what we are working towards. This poster is a tool to help build up the Occupy movement, deepen the anti-racist analysis of the movement, and express the solidarity of white communities with immigrant families of color in the 99%. We hope the poster will help express the Occupy movement’s support for immigrant rights struggles around the country.

3. We want to challenge the ways that racism divides movements for justice, and give white people tools to work against these divisions. We want to support white people standing with communities of color in ways that feed and nurture a culture of solidarity, dignity, and love. While we work against the impacts of systems of oppression in our communities, families, and lives, it is essential that we also build up liberatory culture, relationships, alliances, and practices.

Suggestions for using the poster

1. We encourage anyone and everyone who wants to distribute, hang-up, print-out, and use this poster, to please do so. We have also created the poster with the above goals of reaching white people. With that said, the suggestions below are geared towards reaching white people, but they can also be used to think about reaching out to people in all of our communities.

2. Take a moment to think about who you would like to distribute the poster to and why. You might think of people in your life and networks, as well as organizations, spiritual communities, places of business, Occupy lists, and so on. Write up a short statement about what the poster means to you and why you think it’s important to work against racism and for economic justice. If you are sending it out to organizations, or Occupy lists, maybe write something about what it means for the work you all are doing and how you can use the poster to help move that work forward.

3. If you can, distribute the poster, and other posters from the “We are the 99%” series, through organizational newsletters, blogs, websites and use it as an opportunity to talk with people you work with about why it is so important that we work against racism and for justice. Use this as an opportunity to express this organizationally in the distribution of the poster.

6. Use the distribution of the posters in the Occupy movement as a way of engaging thousands of people of all backgrounds who are new to activism, about why anti-racism is a catalyst to building the powerful, working class-based, feminist, multiracial movements for collective liberation that we need. It is often helpful to have conversations with white people about racism, white privilege, and anti-racism, in the context of talking with them about something they can concretely do about it. It is important to help move people through, understandable, guilt, shame, and fear, by presenting positive options for thoughtful action.

7. Use the poster to step further into your power as an anti-racist leader in your community, organization, and Occupy demonstration (we are all leaders!).

8. If you are part of a group of people distributing these posters, share experiences, lessons, and advice with one another. Momentum is a powerful force for moving people into action

This Sunday Jesus and I will be presenting at the Socialism Conference in Oakland. It will be at the Oakland Marriot.Sunday, July 4th at 11:30 am. "Art and Resistance". The…