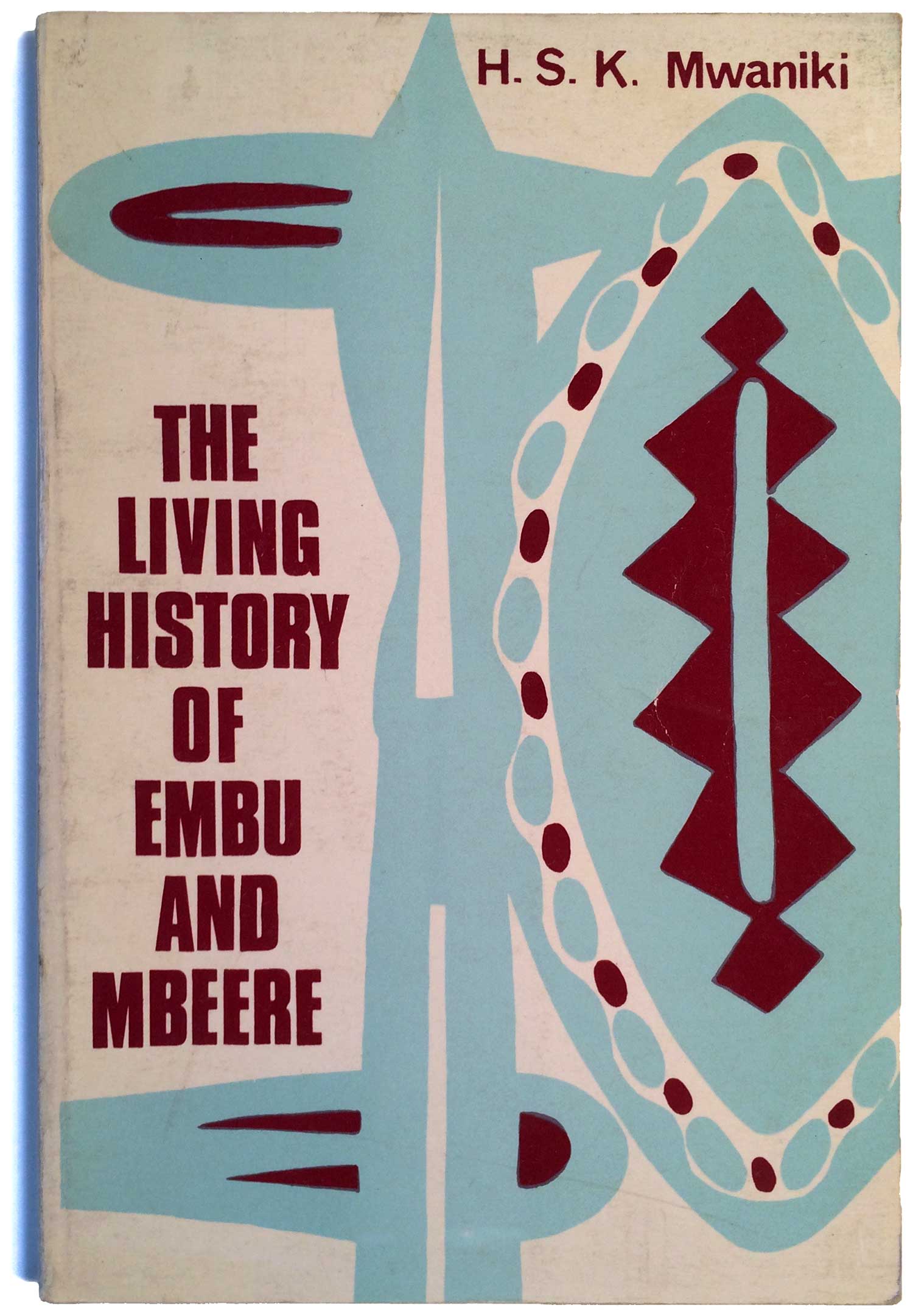 The book above, H.S.K. Mwaniki’s The Living History of Embu and Mbeere, was published by the EALB in 1975. The mid-70s seem to have been a heyday for EALB, as that is when the first runs of almost all of the books in this post were printed. Although it looks like EALB/KLB published dozens, if not 100+, titles from the 50s through the 80s, this set of a half dozen are the only ones I’ve been able to find. I don’t think these books are particularly rare, I suspect they can be found in Nairobi, but unlike a lot of other presses, they were never intended for export.

Mwaniki’s cover is a great example of the overall quality of the design of the books. Smart, simple illustrations are printed in one or two colors and paired with basic type treatments, creating low key yet clean and powerful covers. Below is the full wrap-a-round cover of Lydia Mumbi Nguya’s The First Seed. It was also originally released by EALB in ’75, but this is a KLB reprinting from 1978. It’s got a great use of duotone, the cyan and magenta overlapping to create the rich purple lines running across the cover. The simplicity and impact of the illustration is balanced nicely with the architectural construction of the title, with words running horizontal and vertical, all letters but the big number “1”, all uppercase except the “t” in 1st. Unfortunately the designers and illustrators of the covers are not attributed in any of these books. The cover below is striking as well, but much less rudimentary. Clean and tight graphic representations of a rifle and a noose overlap on the front cover within a solid field of blood red. The red breaks up on the top half of the visual field, dissolving into a sparse halftone pattern, which becomes the ground for the thick slab title Punishment & Terrorism in Africa. This is another book originally published by EALB (in 1976) but my copy is a 80s KLB reprint. As I’ve never seen the original printing (of either this title or the one above), I don’t know if they covers have been significantly changed. As above, the cover wraps around to the back, but the illustration is fixed on the front only. Some of the covers are even more simple. The Survivors is about as basic as you can get, five black spears thrust upward in the center of a golden brown field. It might have been stronger if the image had been larger, and the titling smaller, or off-center. As is the visual information is too cleanly stacked: title over author over illustration over publisher. Echoes of Two Worlds has a similar structure, which also keeps it from being as dynamic as some of the other covers. But the illustration is more complicated and self-contained here, and the concentric circles draw the eye in, and set it spinning around to suss out what’s going on in the image And the last book is S.S. Sankan’s The Massai. This one has the full wrap-around, graphic running horizontally from back to front and across the spine. The only drawback to the cover is that the black and purple are too close, there’s not enough contrast for the image to really pop. So the Massai blend into the background, which may be a statement itself, but I doubt it was intentional. I hope to find more books by this publisher in my searches and travels, and will add them here. Next week is my last planned installment of the Africa small press series, with a focus on books from Southern Africa. But since South Africa has by far the largest book output on the continent, there are a number of medium-sized publishers worth focusing on that don’t really fit in the frame of “Small Press.” I hope to get to some of those in the future, including Ravan Press and David Philips’ Africasouth series.