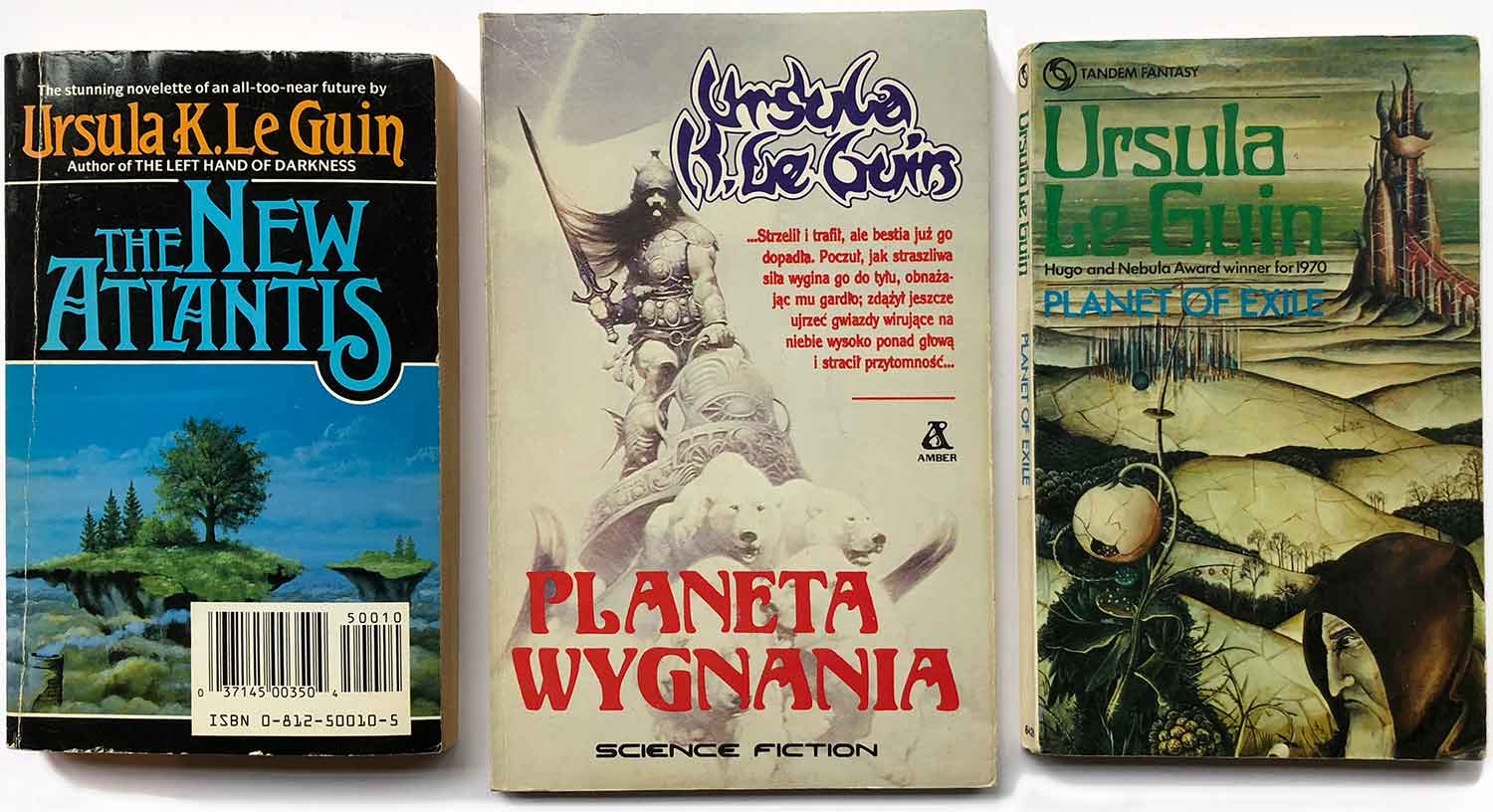 For those that haven’t heard, Ursula K. Le Guin, one of the most important Anglophone authors of the 20th century, passed away on January 22, 2018. I (and many here at Justseeds) have been a rabid fan of Le Guin’s work for most of my life, having read and re-read most of her novels over the past 30 years. I’ve been collected various editions of her books for a number of years now building up to doing a post about her covers. I’m not quite ready, but I wanted to acknowledge her passing and her importance to me and this book cover project, and let everyone know that a killer post of over 100 Ursula covers is on the way!!

Above is a little teaser, with three nice, not often seen cover designs. First is the cover of Ursula’s half of a 1989 Tor double (Kim Stanley Robinson is on the flip side) featuring her 1975 novella The New Atlantis. The cover painting is by Michael Böhme, sadly obscured by that damn barcode. In the middle is Planeta Wygnania aka Planet of Exile, on the Polish Amber Sci-Fi editions from 1990. The cover design is by Dariusz Chojnacki, but the image is by Frank Frazetta, the most well-known of the fantasy cover painters, often associated for the images he created used on covers for Conan and other Robert E. Howard novels. At first this seems like a strange pairing, Frazetta and Le Guin, but on second thought, it’s pretty genius, intentional or not. By associating him with the gender-bending and alternative sexualities of Ursula’s worlds, it’s sort of queering Frazetta and the whole barbarian aesthetic—giving it the Tom of Finland treatment. And finally, a deeply surrealist cover for a UK edition of Planet of Exile (Tandem, 1972). The painting works well here, but is unfortunately not credited in the book.

This is just a drop in the pool of interesting Le Guin covers. More coming soon! In the meantime, here is Ursula’s website, and finally, if you haven’t yet (or even if you have!) watch her short speech at the National Book Awards in 2014, it’s awesome.