What an incredible two-week span in Chicago! First the news broke that two prisons in Illinois are shutting down, including the TAMMS prison that prison justice and human rights activists have lobbied to close for the past decade. Next, news broke yesterday that the Fisk and Crawford coal burning plants in Chicago are shutting down! This is a tremendous victory. Community coalitions and environmental groups in Chicago and beyond have lobbied for decades to close the Fisk and Crawford plants – both of which are located in dense Latino neighborhoods and near downtown. This victory will be celebrated in Chicago and beyond for years and it signifies the power of a multiplicity of tactics – grassroots organizing, working inside and outside the system, direct action, and creative resistance – all working in concert for a common goal: protecting human health and the environment.

“Today, Midwest Generation, a subsidiary of Edison International, announced the retirement of its Fisk and Crawford coal plants, two of the oldest and dirtiest coal-fired power plants in the nation. The announcement marks a historic victory for a decade-long grassroots campaign to protect Chicago residents from the harmful impacts of coal pollution. According to an agreement signed by Midwest Generation, the Clean Power Coalition, and the City of Chicago, the Fisk coal plant in Pilsen will shut down in 2012 and the Crawford coal plant in Little Village will shut down by 2014.”

“For over ten years, thousands of Little Village residents have called on government officials and Midwest Generation to shut down the Fisk and Crawford plants. Community organizations in Pilsen and Little Village joined with environmental, health, faith, and labor groups to form the Clean Power Coalition, launching a groundbreaking grassroots campaign to make Chicago a coal-free city. In the last year, thirty five aldermen and Mayor Rahm Emmanuel joined on the cause. The agreement also calls for the creation of a community advisory council to address issues such as the toxicity and future use of the sites. This is a major victory for the residents of the Pilsen and Little Village communities. “For over ten years our communities have been fighting for the right to breathe clean air, clean land and clean water. Today we are ending over 100 years of pollution for profits and showing the power of community. This fight was more than just about a right to breath, this continues with ensuring the land left behind is properly cleaned to avoid leaving our community with another contaminated piece of industrial land and another struggle for environmental justice in Little Village” says Kimberly Wasserman of LVEJO. The retirement of Fisk and Crawford will deliver substantial public health benefits. Researchers from the Clean Air Task Force found that pollution from Fisk and Crawford causes 42 premature deaths, 66 heart attacks and 720 asthma attacks each year. One in four Chicagoans live within a three-mile radius of the smokestacks..”

Past Justseeds posts on the movement to shut down the Fisk and Crawford plants:

Greenpeace action at Fisk (May 2011):
http://justseeds.org/blog/2011/05/quit_coat_greenpeace_action_in.html

The speech by Athens, Wisconsin dairy farmer Tony Schultz at the Madison, Wisconsin rally on Saturday, March 12th was by far the best speech that I have heard in Madison… 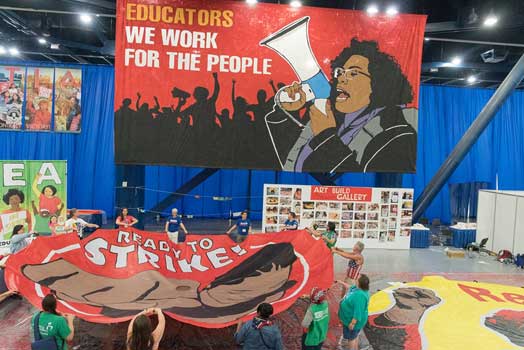 A week of art builds at the NEA Conference in Houston

The Milwaukee-based Art Build Workers just spent a full week working on two large-scale art builds in Houston for the NEA (National Education Association) annual conference. This was our second…