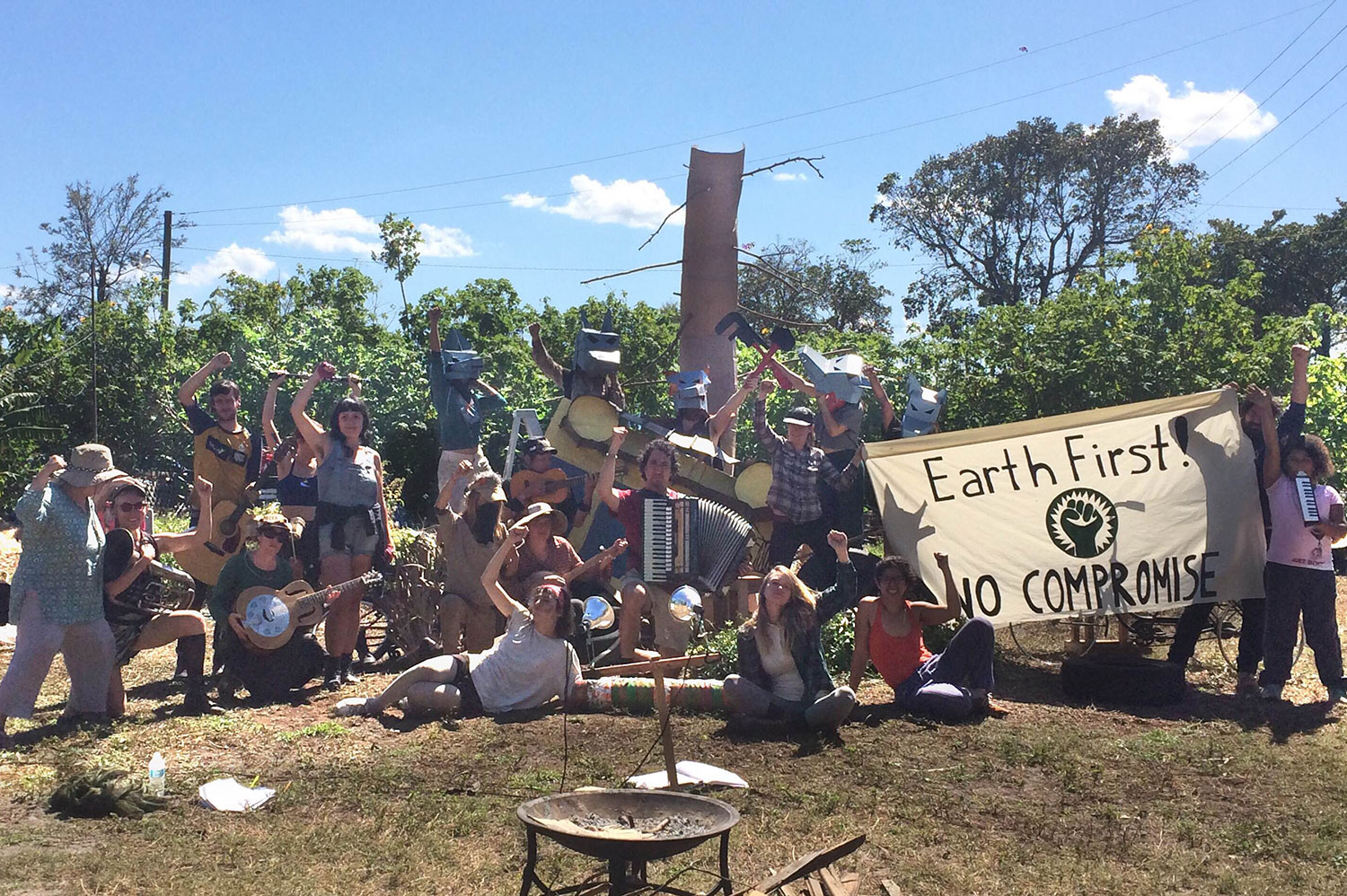 Colleague Maren Ward has been putting together a musical celebrating 30 years of Earth First!– the radical, no-compromise environmental movement that brought direct action to the forests, mountains and deserts of the US and beyond, giving capitalism the finger and stopping developers in their tracks! Here’s a short interview with her about the workshop process for this big, wild, weird undertaking.

Can you provide a bit of background for your involvement in Earth First! over the years?

My first encounter with EF! was in the mid-90’s. I, along with all of the core members of Bedlam Theatre at the time, went up North to protest an illegal timber sale in the Superior National Forest. The protest was organized by a new Twin Cities EF! chapter and some folks from Greenpeace. What was initially intended as a publicity stunt turned into a two week winter road blockade, and succeeded in stopping this and something like 32 other sales of old growth White Pine. Many of us continued to organize on campaigns including solidarity work in support of relocation resistors at Black Mesa in AZ. Then in the early 2000s of course there was the Minnehaha Free State – a 2 year urban encampment protesting the reroute of Hwy 55 through an area sacred to the Mendota Mdewakanton Dakota. Many Bedlamites were heavily involved in that campaign and Earth First! stories and songs were shared at many a Bedlam Romp (crazy community theater collaborative events) in Minneapolis. How did the idea arise to do a musical about Earth First? Somewhere during that time there was an EF! Rendezvous in Minnesota and I think that I acquired the 20th anniversary EF! tape “Keep it Wild’ there, which had on it the greatest hits of movement folk-songs. Fast forward 7 years or so, and I was listening to that tape and reminiscing and I started fantasizing about a Broadway-style musical that utilized those songs. I was struck years later realizing how much those songs had influenced me and I was imagining 12 year old girls singing “Warrior of the Earth”. Well, it simmered in my brain for many years and now we’re finally doing it.

Who are the main collaborators? I’m working with Donna Oblongata – a theater artist based in Philly who has been creating and touring original fantastical political DIY epic shoestring theater for many years. She and I facilitated the collaborative creation of the recent workshop performance in Lake Worth.

Describe the process of creating a drama about a social movement. What kind of research did you do? We’ve done two workshop performance processes – one with students at the University of Minnesota and one with about 40 artist/activists in Lake Worth this February. Our research has included attending recent Earth First Rendezvous and talking with folks there, interviewing “old guard” EF!-ers, reading material, watching documentaries etc. We’ve also been grilling our friends who are currently involved and also speaking with people who’ve stopped working with/under EF!.

Did you interview a lot of people? We’ve spoken with dozens of people I’d say. Some really in depth and others more casually. How did you get people involved? We announced it at the Rendezvous two years in a row. We put an ad in the Earth First! Journal. We have people who are currently pretty deeply involved in organizing who have been putting the word out. The people who elected to join us were a mix of those who have a lot of EF! experience and many who have peripheral experience but are artists who were into the concept. The crew that came together in Lake Worth was an awesome and talented bunch. Our process included delving into individual research– sharing and writing and brainstorming and learning the songs. Then the group “intuited” the outline (which is how I’ve been putting it). One day we did one really long-form improv, pulling scenes and character ideas off a board and figuring out how they might fit. Then we all wrote dialogue that Donna sifted through and assembled into a script which was then further elaborated on by the ensemble.

I understand you’ve been developing it in Lake Worth, FL, current home to the EF! Journal’s editorial collective. Can you describe the community of environmental activists in Lake Worth? My impression is that a lot of organizing around environmental and other issues occurs in Lake Worth, under EF! and other auspices. There has been an active campaign for a while now protesting the destruction of a local forest to make room for a research facility. There’s been an anarchist scene for a long time there that was enhanced when some folks stuck around after the FTAA protests in Miami in 2003. The Lake Worth radical community are extraordinarily hospitable people used to hosting radical snowbirds. How do you feel about the thing itself now it’s a reality? I would say I’m both very excited about it and sort of terrified by it, to be honest. It’s very satisfying to see what was basically a fantasy start to come to life. And from the response from the two workshops I feel convinced that I’m right in that these songs are great. It remains a daunting task to convey the complexity of 30 years of this movement, and we can’t, really. But I think we’re capturing some of the spirit, the successes, the failures, the drama, the comedy. I think the questions people within the movement are asking and which the musical attempts to convey – questions about tactics, priorities, culture – . …. are relevant to other radical movements and social/environmental justice seekers.

What are your plans for it now? We’re digesting the Lake Worth experience and beginning to design the next phase of script development. Hoping to mount and tour a (final?) version in Summer, 2017. Program Notes from Lake Worth:

At one point in this evening’s performance, a cell of thermophilic bacteria that lives off human feces comes alive and declares, “Great is this world that I have entered! Oh beauty! Natural beauty! I love life!” Sure, we don’t really know how these bacteria process or express whatever emotional life they have, but we do know that what can look (and smell) from one viewpoint like nothing more than a useless pile of dung, is, from another viewpoint, the thing that makes life possible– nutrient-rich, even! In other words…WELCOME TO THE SHIT SHOW!

We’ve lovingly adopted this phrase over the last month, in acknowledgement of the trials of political consciousness and of collaborative creation. Because every time we’re tempted to say, “this is a shit show” we want to remember that shit–very literally–makes stuff grow.

The folks who’ve come together to make this musical are artists and activists from around the country, some of whom are currently involved in EF!, some have past experience, some have no experience with it at all.  This project is not meant as an endorsement nor a condemnation of the EF! movement. It’s a creative examination. It’s an opportunity to spend time celebrating what some of us see as accomplishments, while grappling with questions that many of us have about the culture and tactics of EF!. While we aren’t specifically endorsing anything, we are compelled by the idea of “No Compromise in Defense of Mother Earth,” which has always felt like a challenge to strive to meet.

Our process included speaking with “Earth First!ers” past, present and “never again”, reading EF! Journals, poetry books, singing songs from the Hootenanny songbook, and watching documentaries and musicals. This research generated scenes, characters, and story arcs, most of which have been filed away for potential future use (or compost)– but some of which we are sharing with you tonight! There is much on the cutting room floor and much left to be made. We are very interested in your feedback and how it might inform future incarnations. Really! Truly! Let us know!

Lastly, we want very much to thank the radical community of Lake Worth, Florida for supporting this DIY artist residency.  As you can imagine, this is not an easy project to fundraise for and without such a giving set of folks we could not have done this at all. We are so deeply grateful. When this show makes it to Broadway, y’all get an executive producer credit!

And so, we give you Earth First!: The Musical Winter Workshop. 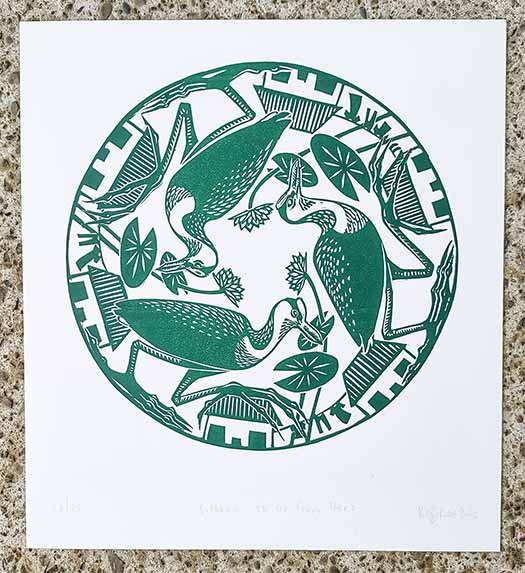