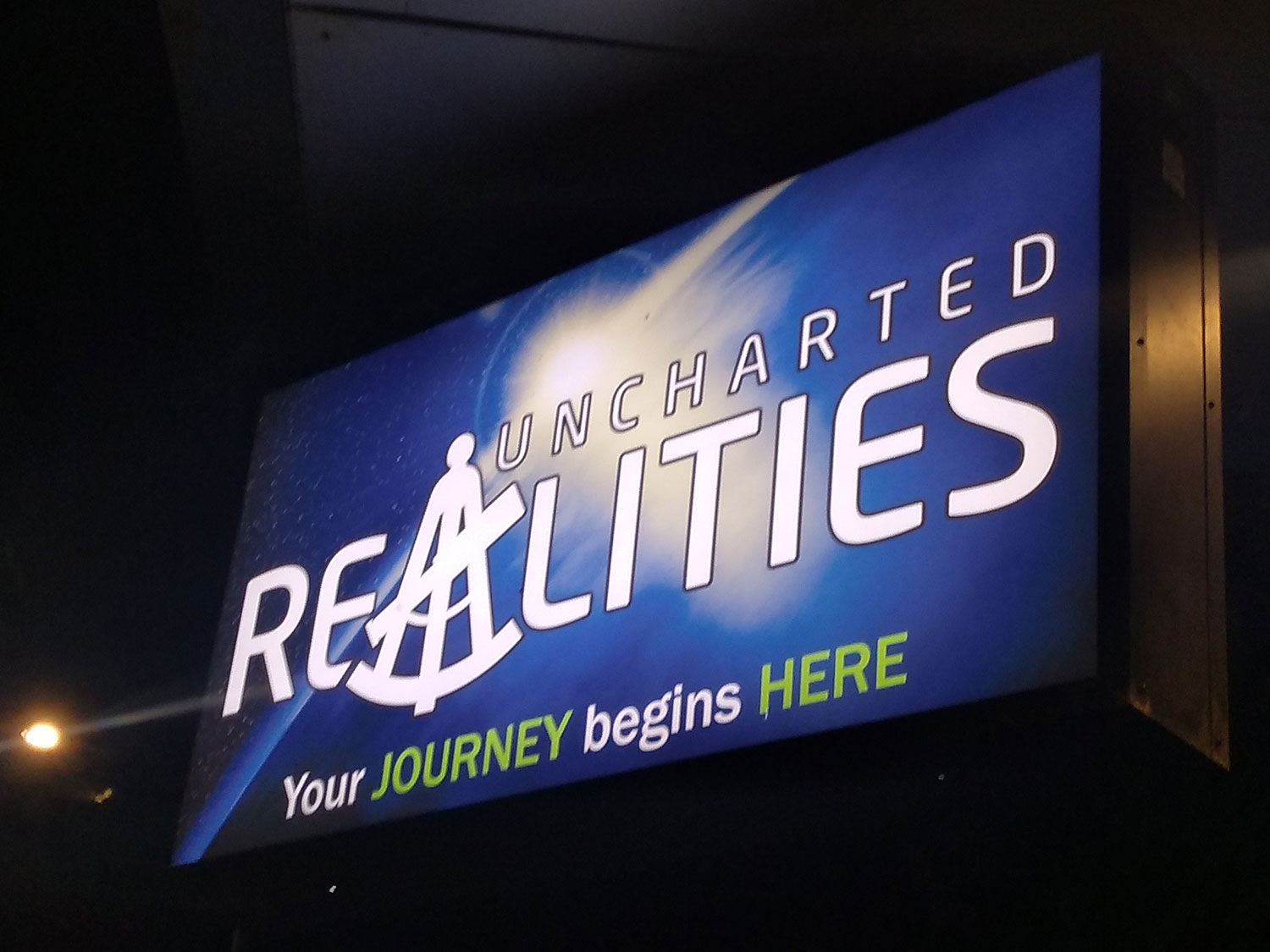 It’s been 53 days of protest in Portland. Tonight at the Justice Center a line of mothers in yellow is pressed against the new fence that the Federal forces have installed. The fence runs along the outer edge of the pillars that frame what used to be the entrance, but is now a series of sally ports framed in oriented strand board. The pillars are covered in graffiti, reaching impressive heights. The message is coherent here, in paint: ACAB. FUCK 12. GEORGE FLOYD. BREONNA TAYLOR. KENDRA JAMES. QUANICE HAYES. JASON WASHINGTON. BLACK LIVES MATTER. The larger doors are open behind the fence and shapes are moving inside. The crowd is large tonight, maybe a thousand, maybe more. On my way around the park I pass someone decked out head to toe in slick black latex with a gasmask and visor to match, and boots with about twenty buckles a side. In the center of the park is the Riot Ribs commissary, under a series of new blue canopies, the older ones having been swept out of the park by the feds some other day. Yesterday? When was I here? A variety of things are on the grill, the line is about twenty deep. I stand and watch the crowd chanting at the courthouse. From over my left shoulder someone or several someones are aiming green lasers into the open doors of the courthouse. It’s completely black in there. The lasers glitter. It feels like I am wearing the shoulder-mounted missile from the Predator movies.

I move around, through the crowd. The mothers in yellow are linked arm in arm. I run into a friend, and another friend. I can hear the panels of the fence crashing onto the concrete. The chants are loud, strong. “NO GOOD COPS IN A RACIST SYSTEM” – that’s a new one, it has a great cadence. I make my way around to the side where the fence is coming down. It falls in slabs, and people are pushing it down the street like a snowplow to flip up and block the side doors to the courthouse. I look down the line of pillars and I can see figures in dun camo emerging from the sally port. Flashbangs go off, very close and loud. Tear gas canisters start arcing out into the crowd, the smaller shells and the big grenades, smoke pluming up from them, the crowd beginning to move back, chanting “STAY TOGETHER, STAY TIGHT! WE DO THIS EVERY NIGHT!” We are walking, not running, through the park across the street as the federal officers rush out into the crowd, sweeping us out into the streets beyond. The gas is choking and thick and a small breeze is pushing it along with us. I circle two blocks and return for my bike. I can see the feds rushing a different section of the park, and grenades are bouncing off the street towards me as I fumble with my lock. I’m in a small group moving quickly down a sidestreet where the gas is thinner. Then I’m out on the esplanade and the sky is clear and there are a few stars. I can hear the explosions behind me as I head home.

This is night 53. I’ve attended maybe a third of the nights of protest since they began, in the aftermath of the murder of George Floyd. The movement is growing, swelling, changing shape and size. It is Black-led, people of color are in the forefront, on the bullhorn, making calls and statements. The movement behind is eclectic, impossible to simply summarize: it’s a mid-size American city. It’s very difficult to make clear and sweeping statements about what the protest movement here in Portland is, but that doesn’t stop people from trying, including me. It is responsive to changing circumstances, open to new ideas, although a bit stubborn about its targets. For the first twenty or thirty days there was a fence around the County Justice Center, next to the Federal Courthouse and the main subject of protest most nights, and the fence became a symbol. The it was torn down and it went away and the Elk statue in the center of the parks became a symbol. Then the Elk statue was removed by the City’s public arts department and the plinth it stood on became the site of nightly bonfires until the stones exploded and the city dragged what was left of it away. All the while people focused a warm rage at the seats of authority that they were squared up against, while splinter actions and rallies took place in other parts of the city, and people in neighborhoods waved signs on street corners, and car parades moved slowly through neighborhoods waving Black Lives Matter signs out of their windows and honking and motorcycles revving their engines and burning rubber loudly on the asphalt that was finally heating up after the longest, coldest spring I can remember.

The police responded to a rally at their union headquarters with especially vicious force, a raw nerve revealed. Not too long afterwards, men in dun camouflage appeared in the violence downtown, with bigger guns, a stronger gas. One of them was seen swinging a smoking censer like an altarboy at some demonic Catholic mass, releasing gas much denser and spicier than the local police had access to. They shot a protester in the head with a gas round and he dropped like a stone, and remains in the hospital. It became clear that the attention of the State at the highest levels was turning towards the protest movement in Portland, and that we were going to be made an example of.

The plan isn’t working out. The plan to import a literal army of high-tech federal police, with an accompanying drone squadron and a federally-authorized no-fly zone, cooked up in some nameless boardroom by the hilariously named video-game villain Chad Wolf, acting secretary of Homeland Security, is foundering on the shores of the people of Portland. The example being set is perhaps the mirror image of the one that might have been expected: in the face of massively increased brutality, disproportionate use of force against overwhelmingly peaceful protestors, and the nascent terror of unmarked vans containing snatch squads roaming the city to pick up individuals identified on the cameras that surveil the scene downtown, people in Portland are redoubling their efforts. New communities are being tapped, there is a sound of people across the city exhaling anxiously and looking around for bike helmets, hardhats, work goggles and respirators, signing on to Signal and showing up downtown with their friends. “Black Lives Matter” is written on walls all over town, on the street, on the plywood covering the windows of businesses within a half mile radius of the Justice Center, shuttered for nearly two months. It’s literally in the air, as sound, as light, as vapor. There’s a new reality being born. On the streetcorner across from the Justice Center there is a business called “Uncharted Realities” and I can’t really figure out what it is, a virtual reality simulator? Some sort of scifi escape room? The sign says “Your Journey Begins Here” and every night thousands of people begin that journey again, heading into some other version of the future. The way things were is a myth now. Nobody remembers anything else.

Portland sees itself as tolerant, liberal, progressive, generous, but the lived reality of many people here is of racism, brutality, poverty, and desperation. The protests feel like the beginning of the process of this city trying to reconcile with itself, trying to become the place it thinks it is, the place it wishes it was, the people it imagines itself as. It feels like watching the hegemony of liberalism desperately searching for ways to take responsibility for itself, for the way things are and the way they’ve been for so long. I don’t know if that hegemony can be so quickly destroyed, I don’t know how much people can unlearn and how fast, I don’t know if people will make the right choices to get out of the way, or to get in the way. I don’t know where any of this will go. It’s definitely a movement, though, and right now it’s moving. I’m going with it.

4 comments on “Fifty Three Days of Protest in Portland, Oregon.”

Thank you, Roger and Jeff, for such vivid images and for the brilliantly written commentary on a very desperate time in our nation’s history. Keep on walking the walk, and talking the talk—and, then posting for us to share.

Thanks for the report, Roger! Hard to know what the hell is going home from afar.

My burning question (no pun intended) is WHY the news channels are cutting off showing protests once the government troops came in. At whose request to censur? The American people need to see what is really going on. I’m 77 and not in good health or I would go to your city.

In my younger years I was part of the several major protests and know how the government hires ‘operatives’ to divert attention, away from the message, to violence.

Trevor Noah of the Daily Show just did a spoof regarding the protests and future protests on how to get a response for the media to cover it .