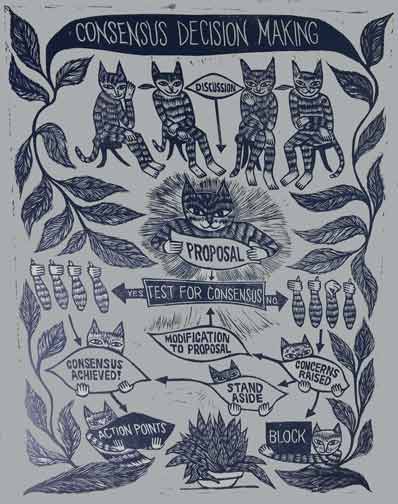 I learned about consensus decision making when my parents joined a Quaker meeting. American Friends Service Committee explains the process quite beautifully: “Quaker decision-making is grounded in the belief that when several people come together to labor in the Spirit they can discern a truth that exceeds the reach of any one individual. In making decisions Friends do not simply vote to determine the majority view, but rather they seek unity about the wisest course of action. Over time Friends have developed ways to conduct meetings that nurture and support this corporate discernment process.”

Rhizome wrote a brief history of consensus decision making which can be read at this link. Included in this article is the use of consensus process by Indigenous groups. The Haudenosaunee Confederacy are credited as being the oldest participatory democracy on Earth.

Some people have told me they’re reluctant to use consensus because they imagine it takes too much time. However, what I have found is that when we use consensus decision making, it leads to better decisions that more people in a group feel greater confidence in. It allows for time to talk out issues people have with an initial proposal, which can lead to a more complex and healthier proposal that better serves the group. Making decisions by consensus means having time for discussion so that the whole group has time and space to thoroughly understand the issue and implications for the proposal, they can voice their opinions, perspectives, ideas, and the group can create a more comprehensive final proposal that can better serve more people in the group. In my two decades of using consensus in various organizations, consensus blocks have only happened a couple times and those blocks led to better solutions for the group.

Decision making by consensus leads to more democratically run organizations. When folks are given a process to be empowered to have their voices heard, it means that a group doesn’t just follow the most immediately vocal people. A healthy community listens to every voice and can understand and consider the implications for whatever is being proposed. Thorough decision making makes for more engaged members who feel empowered and part of the organization.