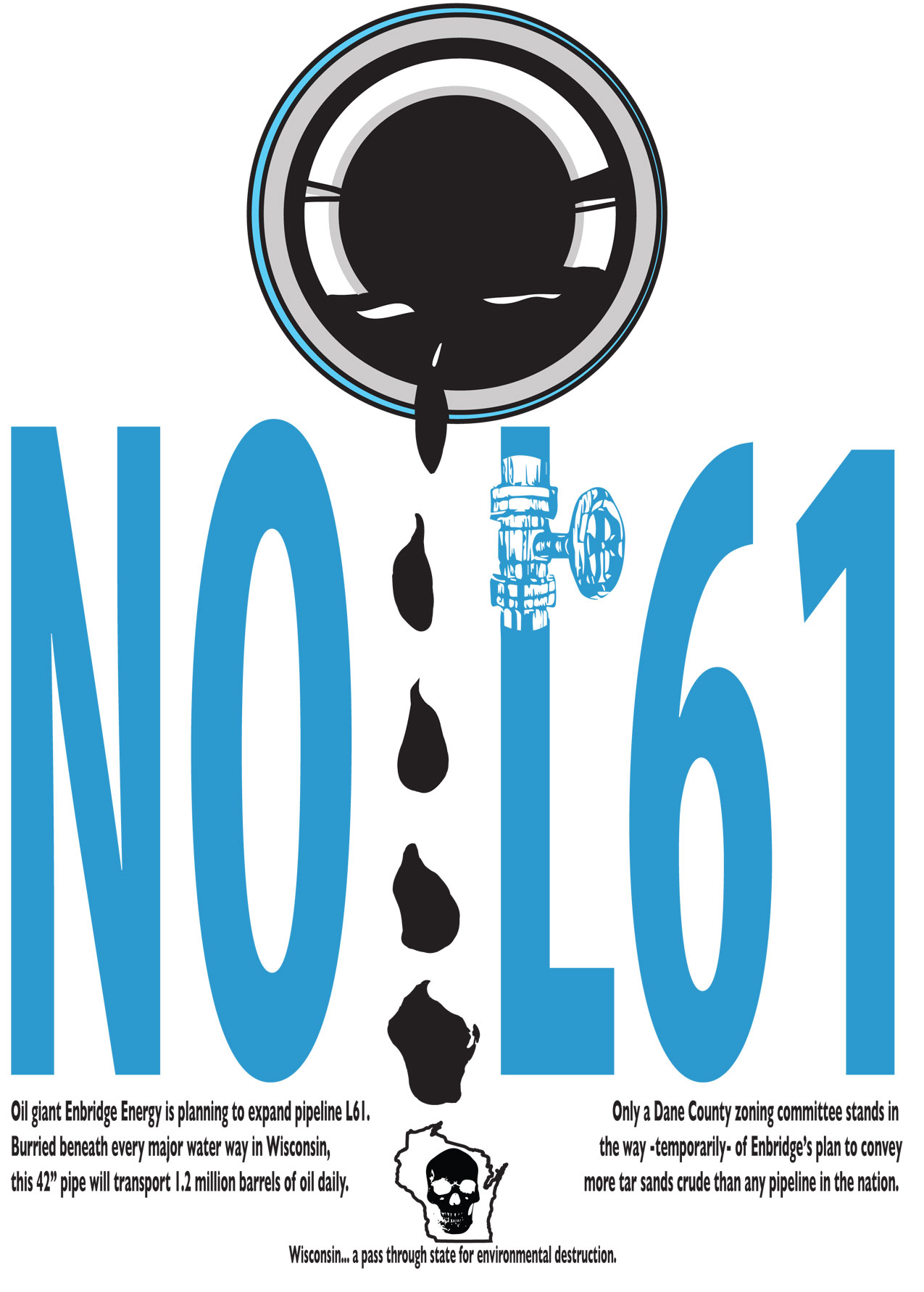 Wisconsin is in pretty rough shape right now, Gov. Scott Walker with the Koch Brothers backing him is cutting essential funding across the state, pushing privatization of everything possible, and the Republicans are fast tracking a right-to-work bill this week. In addition to all of that fun, on the down low there is a massive environmental disaster ramping up across the state. Pipeline L61 owned by Enbridge Energy already exists, and is getting upgrades that will up its pumping capacity from 560,000 to 1.2 million barrels of crude oil daily, that’s 1/3 more than Keystone XL would. Only a Dane County (Madison area) zoning committee is holding up the process for the permitting of a pumping station.

I made a poster about the issue and I’m hoping to spread it around to raise awareness of the issue, since it has mostly been off the radar across the state, which is exactly what Enbridge wants.
Here’s a downloadable 11 x 17 version of the poster Download file
Here’s a downloadable 8.5 x 11 version of the poster Download file
feel free to use and spread around.
here’s more info on the pipeline from Earth First Journal:
“A 42-inch pipeline buried beneath every major waterway in Wisconsin would dwarf the volume of gritty, chemical-laced sludge carried by Keystone XL when it amps up operation next year. Only a Dane County zoning committee stands in the way — temporarily — of oil giant Enbridge’s intention for Line 61 to convey more tar sands crude than any pipeline in the nation.
A network of pipes and pumping stations built at various times and gradually joined together, the convoluted line began in 2006 and currently pumps an astonishing 560,000 barrels through Wisconsin daily. After its 12 pumping stations are either constructed or upgraded with additional horsepower, the line would convey up to 1.2 million barrels daily — one-third more than the Keystone XL’s 800,000 barrels.
Enbridge, North America’s largest oil and gas pipeline operator, has the Western Hemisphere’s worst record for spills. The National Transportation Safety Board has recorded 800 incidents since 1999 — and that’s not including oil that seeps into the environment from weak or corroded sections of pipe, which is ignored by federal regulators.”
full article here
and one from the Sierra Club here